Inside the Clemson Offense: Deep Cross

Share All sharing options for: Inside the Clemson Offense: Deep Cross 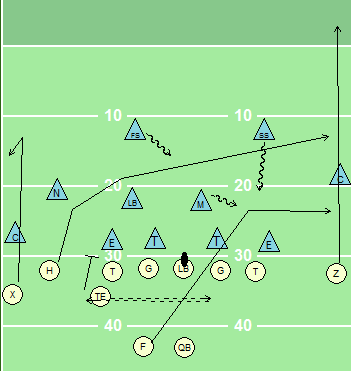 This is the play that Brandon Clear scored his 70 yard TD on this weekend, our version of the Deep Cross, a vertical stretch and flood pattern. Since this play has been explained before elsewhere we'll just do a quick breakdown of it for Clemson fans, plus we got a good vid clip of it in action.

Most of the crossing routes in our system are to take advantage of man/man coverage and indeed most of the plays NT used against our predominantly man coverage were crossers and quick slants, but this one attacked the zone coverage that North Texas showcased for most of the game.

The initial motion by Dwayne Allen is meant to showcase some adjustment NT has made for him. If the LB or NB goes with him, its man. If they just realign, its zone. You can tell then that they are playing zone coverage, and my pre-snap read would be Cover 2. The FS is allgned 12 deep and the SS about 10 deep off the tackles. The Corners have alternated their alignment (press or off) to disguise the coverage, so it could be Cover 3.

One of the reasons why, in my opinion, that we don't develop our WRs quickly is due to sight adjustments. Our offense is descended from the old Run & Shoot, Spence was a R&S guy in his youth and the basic core of his system is still used here, its just been simplified and Napier has added his preferences for the I-formation plays that he and Dabo are both familiar with (the '92 Bama squad was mostly I-form). The R&S is heavy on plays where the routes that are run by the receiver change based on the coverage that the defense shows. In theory its the most advanced way and hardest to defend, but I think its harder to teach, and we don't have a great track record there.

In this play the Z, Brandon Clear, reads the presnap coverage. If he sees C2 shell he runs a Go route up the sideline. If its Cover 3, a skinny post. In the play it appears to me that the press corner bails into Cover 3, and the CB on Clear forgot what he was playing. He has deep coverage there and came up, so he ran the Go. The Go route is the #1 read on the play usually, so Parker is looking at him first.

The deep crosser, Bryce McNeal, has to run in front of the FS and WLB, and behind the MLB. With the way they are aligned its no problem for him to run over MIKE, but the WILL is ignoring him. His alignment stacked dictates McNeal should just run over him too. WILL is worried about Dwayne Allen, who ends up blocking. McNeal ends up covered by the FS over the middle but should find a spot underneath the CB on the playside, and is the #2 read.

Harper runs PA up through the B-gap and runs an option route outside to the flat. Both the SS and MIKE are squeezing his route, so if Brown wasn't open, McNeal should've been and Parker would've had to throw to him. Harper is the #3 read. An option route means the RB has the option of going in or out based on the position of the coverage. They are above and to his inside, so he goes out.

The backside hitch route is just a safety valve, the last read on the play and you only go to him if everyone is covered.

So this particular play was a case where everyone made the correct read pre-snap and everything worked.