Clemson vs North Texas...What the game statistics tell us.

Share All sharing options for: Clemson vs North Texas...What the game statistics tell us.

I was out of service during the Clemson game this past Saturday (wedding) and relied only on rare Blackberry score updates throughout the afternoon. I know, who in the world--or at least in the Southeast--schedules a wedding during football season?  That is a different story for another day.

I would like to begin by giving you my opinions about the game based solely on text messages received and pretty much the box score. This should give me a chance to look at this objectively and simply by the numbers before watching the game play and realizing exactly why the numbers ended up the way they did.

Hit the jump and we will look at the numbers and what they mean.

I have taken the liberty of cutting and pasting the Team Statistical Comparison from www.espn.com below and will begin the discussion with this bit of data. I also realize that Clemson won the football game by the score of 35 to 10. 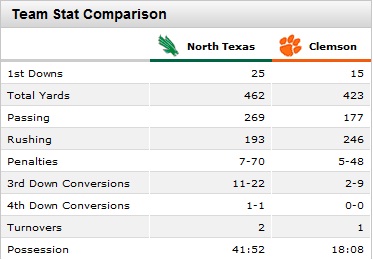 Let’s go line by line through this comparison to see what we find. Clemson was able to produce 15 1st downs compared to North Texas’ 25. This data, combined with the next line (423 Clemson total yards compared to N. Texas’ 462 total yards) AND the game score indicate a couple of things.

First off, both teams had big offensive days as indicated by each squad gaining over 400 yards on the afternoon. The 1st down stat indicates how each team moved the ball. Clemson appears to have gained most of their yardage on big plays. North Texas appears to move the ball methodically, attaining many first downs.

North Texas appeared to have a more or less balanced (58% of the yardage coming through the air) attack gaining 269 of their yards through the air and 193 on the ground. Clemson was also fairly balanced with the majority of the Tigers’ offense (nearly 60%) coming on the ground. Neither team was penalized too terribly.

The third down conversion numbers are interesting. North Texas was in such a situation 22 times, converting half of those occasions. Clemson, on the other hand, saw third down 9 times, converting a mere 2 of those 9 opportunities. Again, North Texas was able to move down the field 3-4 yards at a time and controlled the ball accordingly. This is further shown in the time of possession statistics. N Texas had the ball more than twice as long as Clemson, presumably because of Clemson’s inability to limit North Texas’ third down success.

I began to get more and more curious about this 3rd down conversion issue, so I pulled the distances for all third down attempts in the game.  See below for this data (somehow I have one more successful conversion than the stats shown above.  I don't know how this happened because I used ESPN play by play data for this exercise.  Otherwise, the data should be good per the WWL).

Two turnovers to one really doesn’t stand out too much and is about what I would expect.

Now we will look at the individual statistics from the team leaders to determine who, in a fantasy football-like approach, played well. Again per ESPN.com: 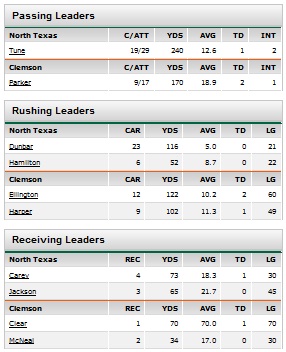 North Texas' Lance Dunbar had a big day running the football.  This is not a total shock since Dunbar ran for well over 100 yards last season.  116 yards by Dunbar on the ground (5 ypc average) indicates that Clemson did a poor job at the point of attack, allowing the Mean Green to pick up small chunks of yards (his long was just over 20 yards).  N. Texas James Hamilton had a nice outing as well averaging 8.7 ypc on 6 carries.  It is extremely disturbing to see that Clemson probably had poor play out of their defensive front and/or out of the linebackers.  This becomes even more disturbing when you look at Clemson's inability to stop the run late last season.  The next question that must be addressed is whether we have a talent issue, a technique issue, or a scheme issue or a combination of these problems.

Nathan Tune was 19/29 for 240 yards, 1 TD and 2 picks. I would have liked to limit the Mean Green to less than 200 yards through the air, particularly since we expected little dropoff from last season. The two picks sound about right particularly returning two excellent safeties. It appears as though North Texas was able to hook up a couple of big plays in the passing game, completing at least one pass of 30 yards to Darius Carey and at least one of 45 yards to Jamaal Jackson.

We will now look at this thing from Clemson’s side of the football. Kyle Parker was 9 of 17 for 170 yards, 2 TD’s and 1 interception. This is hardly lighting up the football world. Clemson’s leading receivers Saturday were Brandon Clear and Bryce McNeal. Clear had one grab for a 70 yard touchdown. McNeal had two catches for 34 yards. Not listed here was one reception for 24 yards by Dwayne Allen.

Clemson’s passing attack is troubling to say the least. Completing just over half your passes against an inferior opponent is not acceptable. I know that Parker had accuracy problems last season and am fearful that these issues were not addressed over the off-season. Add to this the fact that there is no guaranteed go-to receiver and we have more problems. Probably the most disappointing number is the single reception by Dwayne Allen. We fully expected Allen to be a critical part of this offense and will need production out of the Tight End if the passing game is going to come around.

Knowing these items, I am ready to look for reasons that North Texas was able to methodically move the ball against our defense and why our passing game is less than par.  Apparently, I will enjoy watching both Clemson backs run the football and probably cringe watching NT run the ball.