North Texas represents the Sun Belt Athletic Conference and is located in Denton, TX. The Mean Green are coming off of a 2-10 2009 campaign.

Todd Dodge is a Texas high school football legend. Dodge was able to dominate 5-A football, winning 4 state titles in his 7 years as a coach at Southlake Carroll High School. Prior to getting into the coaching profession, Dodge was a quarterback at the University of Texas in the early/mid ‘80’s. Outside of the high school arena, Dodge coached the receivers at N. Texas in the early ‘90’s and turned down an offer from Bill Parcells to join the staff of the Dallas Cowboys in order to become the head man at North Texas.

Famous alumni include "Mean" Joe Greene (this is where the school’s mascot--the Mean Green--derives, though this was the nickname of the '66 defense) and current NFL’er Cody Spencer. It should also be noted that Hayden Frye coached the Green before moving on to Iowa and Jerry Moore coached there before moving on to become well known as App State’s head man.

North Texas runs a spread offense that Todd Dodge brought with him from Texas 5A power Southlake Carroll (Chase Daniel, among others) that is very simple to teach and run, somewhat similar to what Brian Kelly ran at Cincinnati. Last season Dodge called the plays himself but this year its going to change with the new OC from South Florida.

In Dodge's own words, they are a shotgun team 99% of the time and only show 3 formations. Doubles (2x2), Trips (3x1) and a (3x2) formation, with the RB placed to either side of the QB (of course, this was when he coached HS) and very little motion. They utilize a quick passing game for the most part, with considerable zone reading and both jailbreak and bubble screens used heavily as substitutes for the various running plays that you give up when you go Gun most of the time. Unlike Clemson they do not make sight adjustments, where the WR's route is based on the coverage he reads, and when a play is called thats what the WRs run unless an audible is called by the QB.

With new OC Mike Canales, expect more formations and more shifting, and perhaps a few more pro-style run plays. In either case, Clemson will be in Nickel during most of this game.

Their base defense is a 4-3, which bases out of Zone coverage, mostly C2/C3.

How the 2009 Mean Green fared in the major categories:

And, here is how the Clemson Tigers looked in '09 in the same categories:

North Texas is lead by fifth year senior Nathan Tune at the QB position. Tune was able to beat out Derek Thompson during the Spring and early-Fall and Riley Dodge who started last season as the Mean Green starter but has moved to the receiver position after some injuries. Dodge is the son of head coach Todd Dodge and his loss due to a shoulder injury was a major blow to this squad last season. It is of note that Tune was the starter when N. Texas played the eventual national champions, the University of Alabama Crimson Tide.

The Mean Green return four offensive line starters and running back Lance Dunbar who was able to run for nearly 1400 yards and 17 touchdowns in his Sophomore season. The Green also return their 2009 leading receiver in Jamaal Jackson. Jackson caught 71 balls for 701 yards and 6 TDs last season.

Interestingly, North Texas has agreed to travel to Athens in 2013 to play the Georgia Bulldogs. The Dawgs are paying the Mean Green just short of a cool million dollars to make the trip…not too shabby.

How do these two teams match up talent wise (via Rivals and Scout recruiting data)?

This one is pretty cut and dry.  Clemson has much, much more talent than the Mean Green.  You will notice a moderately decent 2008 recruiting class.  North Texas also boosted some of its recruiting rankings through a Junior College campaign. 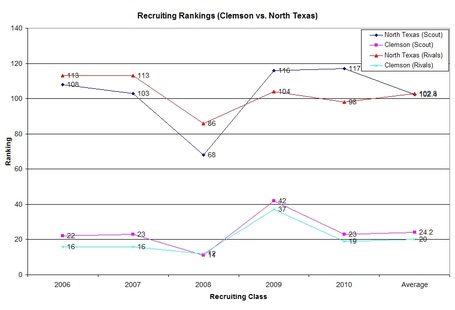 From this week's Press Conferences:

How good is this running back (Lance Dunbar) from North Texas?

Kevin Steele: "He's good. He's a very good player. People don't realize the parity in college football now. You can go and find first-round draft picks at DE at Troy. There have always been gems that have been found in the history of football. Now, it's broad based when you start seeing NFL players who are coming from all over. I don't think you have to say but two words to justify that - Boise State. 15 years ago I don't know if ESPN ever mentioned them. If they did, it was an afterthought. Now, they're talking about them being in the national championship game. That tells you about the changes in the landscape of college football. Back to their back  he's special. He's as good as anyone we'll face."

How do they like to get the ball to him?

NT's Offensive coordinator Mike Canales was the OC at South Florida under Jim Leavitt last season, and both the Mean Green and the Bulls ran a spread system. NT ran a little more of a pro-style spread offense with some of the same sets as the Tigers, but would show more doubles sets (2x2) and trips (3x1). South Florida, on the other hand, ran more motion presnap with multiple formation shifts, so this is what Steele is alluding towards. Both ran quite a bit of Zone Read, so we'll see if the Tigers have figured out a better way to stop it this season right off the bat. It doesnt appear though that NT's QB is a runner at 6-4 226. We'd be surprised if he ran too much.

DaQuan Bowers said that Dunbar reminded him of Brian Maddox (USC) and Cooper at Miami on film. He ran for over 1400 yards last season. Its likely we will see Wildcat with him taking the snap. Steele said a lot of the problems in the Wildcat/Single Wing last year were with alignment, and he believes that has been corrected.

"One of the things that’s becoming more evident to me as a young coach is, the guys that haven’t been out there and done it yet, their acuity and where they’re at mentally is not where a veteran is. So you don’t know. You throw them out there, and you just don’t know what you’re going to get.

I think last year, Jaron was an example of that. He got in there and maybe dropped a ball here or there, and it just fried him. He was like, ‘Whoa, this is a little bit bigger than I thought it was going to be. I need to get myself ready.’ And then he had the whole offseason. He had those memories to base his work ethic and his focus on. Now, he’s ready.

Now there are some young men that you get here and they’re mature and they’re ready. And they’re a product of their experiences or the people they’ve been around, whatever the case may be. And they’re ready. They can play. And you can grow their role, and they’re ready in midseason. Some of them aren’t that way. Maybe they haven’t played much football or played that position. Every one of them is a little bit different. Jaron is a great example. This will be his third year on campus, and I think he’s ready to have a good, productive year."

The consensus is a big Clemson win.  ESPN has placed N Texas in this week’s "Bottom 10". The WW Leader has also laughed at Clemson for having a cupcake schedule, pointing to the Tigers' first two contests as proof of such.

Nonetheless, Dodge appears to be positive going into this contest.  The head man was pretty positive leaving the 2009 season despite the not so positive results.  Dodge hoped to put together a team that would benifit on an improving passing offense.  Injuries, however, have hampered this squad and leave a lot of questions going into the season opener.

Here is a good play by play of the Curtis Martin-like positivity followed by what has happened since with the Mean Green.