Share All sharing options for: Clemson and Auburn Recruiting Comparison

It is important to understand and realize that recruiting is one of the most critical portions of winning (or losing) football games.  This week we will get an idea of the talent on both Clemson's and Auburn's squads based solely on data pulled from Rivals and Scout.

Below, we show in Figure 1 the average annual star rankings for both squads.  Both teams give you what you would expect out of decent football schools...an average ranking that is over 3 stars and five year average exceeding 3.2 stars.  Clemson's numbers are a little skewed by the 2009 class that was extremely small but contained some extremely talented players.  What does this tell us?  The average player recruited by either school has above average talent.  Clemson may have a slight advantage from an "average player's talent" level based on these numbers but that advantage appears to be pretty small.  (more after the jump) 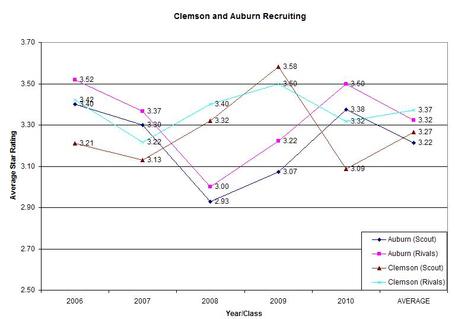 Figure 2, shown below, examines the class sizes of the past five recruiting classes for each school.  Notice that Auburn's class sizes were considerably larger than Clemson's.  While it is impossible to know how many of these players actually enrolled as Freshmen, there is a definite advantage in Auburn recruiting and signing more players.  Since we decided from the data in Figure 1 that both schools recruit comparable, above-average talent, the extra numbers provide Auburn both a better probability of players who live up to/exceed their talent rating AND more quality depth.  From a numbers basis, Auburn appears to have a sizable advantage over Clemson's Tigers. 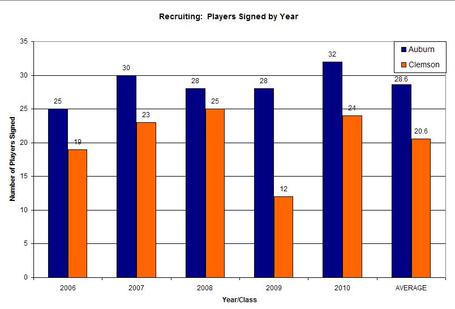 As expected from the data above and shown below in Figure 3, Auburn was consistently ranked higher than Clemson in the average Rivals/Scout overall yearly rankings.  Clemson did have the outlier year (2009) but really did not have a jam up class in this five year period save the 2008 class.  Auburn on the other hand scored top ten classes in 3 out of the last 5 recruiting years.  Subsequently, Clemson's average ranking over the past five years rests between 20th and 25th in the nation while Auburn sits averages a 11-12 ranking annually. 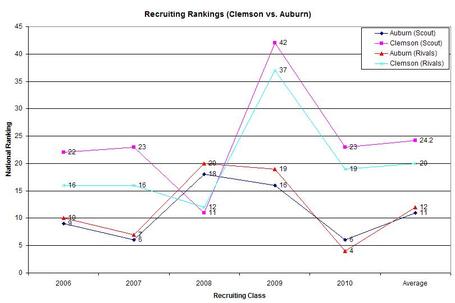 What do these numbers really mean?  These data show both teams recruiting quality players on average.  Auburn, however, has been able to sign more of these players annually.  More quality players equates to a better overall ranking.  More quality players should give Auburn an advantage with more quality backups AND quality Scout team players in practice.  Thus, Auburn should be able to get deeper game rotations and, because of the more athletic practice squad, gets a better look as it prepares during the week for its games on Saturdays.