Run Defense with the Nickel Package I

Share All sharing options for: Run Defense with the Nickel Package I

Run stopping always comes down to being able to control your assigned gap and being able to defeat blocks. That is fundamental. Its something that Clemson has not done well of late in substituted defenses like the Nickel or Dime. Here we'll look at how you can defeat the Isolation and Counter Trey within a Nickel scheme. We'll go through a couple of the primary plays that Auburn and many other spread teams run with and talk about how they are supposed to be stopped within the scheme.

We're going to start from the base UNDER front that we run the most, though here we're taking out the SAM linebacker and assuming that another corner is coming in. To fit the gaps and account for them all, however, you have to have someone in the secondary with run responsibilities. That will depend on the coverage called from the sideline in many cases. For example, a hard Cover 2 will have both Corners playing the flats, and they will have outside run support, whereas in Cover 3 Sky the Safety will drop down to one side with run support responsibility.

One of the primary reasons we have had issues with stopping the spread running game is simply the numbers problem: we put only 6 in the box with a Nickel and sometimes only 5 with a Dime. Within a primarily man/man (Cover 1/0 Robber) defense, the 7th man with responsibilties in the run may be on a receiver, making it very hard for a defense to stop a running QB or even a well-executed spread option system. This makes it doubly important for a defensive line to control their gaps and cause issues up front. We're going to discuss the gaps and how to defend a couple run plays here.

My favorite run play because its so simple, but its also simple for a defense to understand and defend. Iso and Power are both plays where the offense is trying to insert another player at the point of attack. For the Iso we assume there are 2 backs, but it does not have to be a fullback + halfback, it can be a TE leading into the hole, it can be a halfback leading for the QB, it can be a H-back/TE leading for the RB. What makes it an Iso is just the intent to isolate the lead blocker on a LB.

In defending the Iso, I'm assuming the DL squeeze the play (as opposed to spilling, discussed below).  When you squeeze, you are attempting to use your inside shoulder to defeat the blocker, keeping the outside arm free. That means when the strong End is being blocked by a Tackle, he is trying to put his body in the gap to the outside (C gap). This forces the RB to try a cutback, "squeezing" the play inside.

In a man/man blocking scheme like the Iso, the End is on the OT, so he is fitting his body outside the OT. The NG is aligned in the A-gap to one side (strongside) and may be double teamed at the LOS. The 3-tech is sitting over the B-gap, and the weakside (Bandit) sits over the other C-gap. The linemen must put their bodies into those gaps, no matter which way the play goes initially.

You may have noticed that this doesnt take care of all the gaps. The last two are for the LBs to cover. MIKE is sitting 5 yards back over the B-gap in the UNDER front, and WILL is playing behind the 3-technique (called a 30, you just add a Zero for LB alignments). If the play comes to MIKE, he jumps into the B-gap, and WILL has to come behind him. Remember that the MLB is being "isolated" on a Fullback or lead blocker, so WILL has to be johnny-on-the-spot to get the runner. 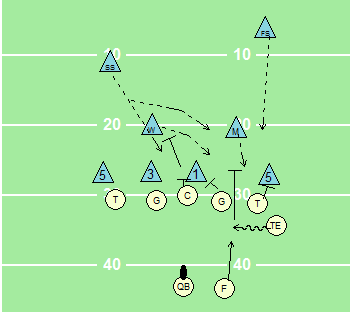 A strongside isolation on the MLB using the TE as lead. MIKE attacks with his inside shoulder and so does WILL, effecively blowing up the lead blocker with their own double team.

When WILL sees the play develop he has an additional issue to contend with, that the NG is being double-teamed, and the extra blocker will come off the NG to hit WILL and negate him, unless either the NG is dominant or WILL is too fast for the O-lineman. One of the reasons why Clemson has such success with the Iso inside is that Dalton Freeman handles the opposing NG by himself, letting the Guard pull off the double-team and hit a LB.

If either MIKE or WILL get caught inside their blocker, meaning they led with the wrong shoulder, they can't squeeze. If they can't squeeze, then the RB goes somewhere where there is no defender for a bigger play. The secondary may not make it in time. If MIKE and WILL do get position on their blocker, but can't get to the runner, the Safety (usually) has the cutback assignment. This would be why DeAndre McDaniel and Marcus Gilchrist ended up with so many tackles last season. They will fit whichever gap is necessary, but as you can see here the SS is initially aiming for the weakside A, then comes over if WILL is blocked out.

In the Nickel, one of those safeties will not be there early on the play. Technically only the SS is tied to the front, but we put him to the weak side in the UNDER shift, and he is likely on the passing strength playing deep cover 2. However the offense aligns their WRs, the safety who has multiple WRs and must play coverage has to make a call to the LBs letting them know he is not there for the cutback. This will affect how they attack the gaps. Look again at the play above, if the SS is playing deep he cannot help WILL. Now the WLB cannot just go over the double-team because there may be a cutback lane in the weakside A, he has to play that A first. MIKE will now try to spill the ball (attack with his outside shoulder, his left above) to the FS.

The whole defensive scheme is based on players squeezing their gaps. If one doesnt squeeze his gap, then thats another hole for only 2 linebackers to cover. 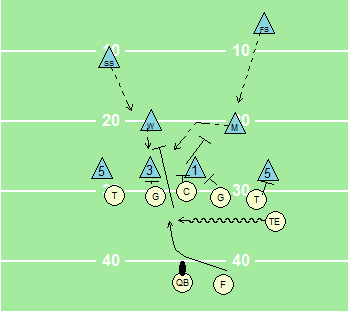 A weakside Isolation in the spread set, notice the WILL and MIKE essentially switch.

If the FS is still available in run defense, the MIKE can come over the double-team when the play is directed weakside. 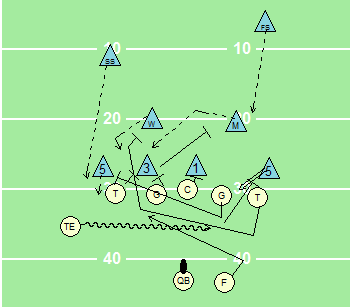 On this play, 3 linemen down block, while the backside Guard and Tackle both pull out. The fact that the 3 linemen are downblocking draws the DL and LBs to that side, anticipating that the RB will go that direction, only to be walloped by 2 pulling OL coming the other way. In most cases, the End on the playside is left unblocked, as in a zone read. This is why most zone read teams have a good counter play in the book too. The Guard pulling out traps him, attempting to push him wide, and the OT comes through the hole to hit the LB, this creates the running lane and seals off the inside. To defend it, there are two basic techniques used: Squeeze and Spill.

When you squeeze, youre effectively changing the gap assignment of the LB and having them scrape over to get into them. The two pulling linemen create 3 gaps, one between and one to each side. You have to recognize them and fill them with defenders. End must push the Guard back into the play with his right shoulder (squeezing him). He does this by using his Block-Down-Step-Down rule: If the line down blocks, you go with them. The OT is there to take out the playside LB, so he must attack with his inside shoulder while the backside LB charges in from the other side. This effectively double-teams the OT, and one of the LBs will be able to get into the running lane and stop the play. 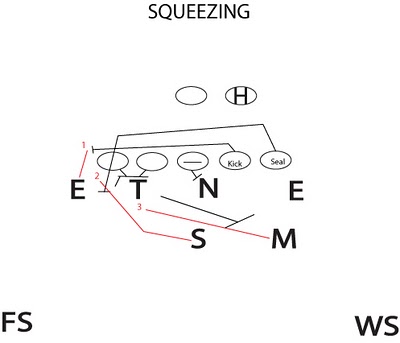 The key is the 3-technique. The play is run to his side usually. If the double-team can neutralize him, you will have a bad day. One of the linemen on the double team will release and take out the backside LB, if they can push him out of the lane. The way to attack it is to not play straight up front. If you are coming off the line without stunting the defensive linemen, you're just playing it safe and hoping that the DL will hold their gap. You may not have the good 3-tech in on that particular play either. What we want to do is nullify the play aggressively, so we'll slant the linemen. All the linemen will charge the gap to their left, for example. This is something Boston College does, and does well, to discourage the inside rush of gap scheme plays.

It is possible, as with any stunt, that you can get caught in a stunt and shoot yourself in the foot, but you have to take risks when your opponent is very good at executing a play. The only other thing you can do with the interior linemen is tell them to cut the O-Line and create a big dogpile. This is particularly true with the DE that is on the pulling Guard. If he cuts his legs out it may completely close the hole.

If you play a hard Cover 2, you can spill it out, having everyone try to force the back to the outside, where a Corner or LB should be available as run support. In that case the End tries to insert his body into the hole and WILL attacks with the other shoulder.

Spilling is a gap exchange, meaning that the DE and OLB are exchanging gaps upon reading the play. This is the type of thing a team like UNC or Miami uses, as they are derived from the old Jimmy Johnson (MIami/Dallas) 4-3 defense. They do things like this quite often for any play, not just counter. Spilling in this case means the DE charges inside, making the RB go around him to the outside, to the LBs (or Corner) waiting to make the play.