We are through the hump-day work day and getting closer to the weekend and another full lineup of football games Saturday.  I guess we will start with an in-state discussion and work our way outward.

Weslye Saunders has been kicked off of the South Carolina Gamecock football team, officially.  We have all heard the rumors.  Running up hotel rooms, bumping around with agents, and pissing off the ole Ball Coach.  Nothing like one of the best college football players in the land on the cusp of raking in boatloads of cash being a complete idiot and giving it all away.  What does this mean for both parties?  Obviously this makes Saunders' quest for lots of cheddar in this year's draft much more unlikely.  South Carolina will miss the big guy who runs well, catches well, and can block.  With South Carolina's woes up front over the past few years, I am not ready to say that they are there yet nor will I ignore how big this loss will be for this team down the stretch.

Closer to home, I have heard relatively little from our Clemson Tigers in advance of the big game Saturday night against Auburn.  Usually it is good for the underdog to keep it low key, especially going on the road.  We do know that linebacker Brandon Maye should be ready to go Saturday.  Maye, an Alabama native, apparently grew up an Auburn fan and is hearing some run from the boys back home.  Hopefully we will see a more mature and head-strong Maye after another off-season and a move to the WIL position.

Reggie Bush has given back his Heisman.  Who really cares?  Dude is a multimillionaire football player who everyone knows won the trophy.  USC is screwed and this guy got over.  USC got screwed and Pete Carroll got over.  Things like this are going to put more and more administrative controls over sports programs at major colleges.  We already see a paranoid administration here at Clemson.  With the NCAA putting the screws to guys playing outside the rules, the big question that I have is which will be first: SEC schools tighten their leash or something close to the Death Penalty in the Southeast.

Lastly, what is wrong with college football off the field?  Can these kids not act a fool constantly and pepper the news with their issues all the time?  From agents to assaults, it is simply ridiculous how often these folks put themselves in compromising situations then get hammered by the media and fans alike.  You are a college football player and probably the coolest shit on campus.  You can get pretty much whatever you want within reason.  Enjoy it but refrain from making the papers (and remember the Fulmer Cup is strictly an off-season competition).  If folks out there don't believe me, here is a snip of ESPN's college football stories this evening (thanks to www.espn.com): 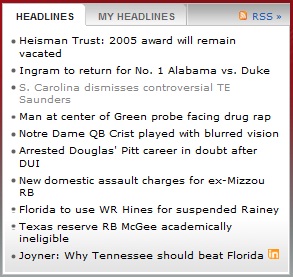