Share All sharing options for: Defending the Zone Read Option

Since it continually comes up, and everyone seems to think that every time the QB runs with it or every run play from shotgun is a zone read, we feel the need to discuss exactly what the Zone Read play is and how and why Clemson has such trouble with it, with help from Coach Huey. We'll make a separate post on how to defend the other popular shotgun/pro-set run plays later this week.

The above video explains pretty simply what the Zone read is, as do the cutups of the play below in actual game situations. There are other plays that are run inside from the Gun quite often, like the trap and counter trey/trap, and the power (though less frequently), or a simple zone play. The primary reason we have trouble defending it is numbers, gap control, and the inability for our LBs to make reads and get off blocks.

When you play the UNDER front as Clemson does most, against 21 (2-back, 1TE) personnel you end up with an 8-man front and the ability to outnumber the offense at the point of attack. When they start substituting WRs for RBs or TEs, you end up with mismatches. If your OLBs cannot stay in-step in man/man coverage with those substituted players then you have no choice but to use a DB instead (nickel or dime). Even if you do have those LBs, you have to realign them, possibly (and quite likely) taking them out of the box to matchup. Most of the time, you'll end up with only 6 in the box.  In this case you can still outnumber the offense (only 5 OL vs 6 defenders) but when one of them misses his assignment, when the back feints a pass route (taking a LB with him), the offense aligns their WRs wider, or when the back blocks for the QB Iso, you could have a bad day.

The Wildcat is a case where you have a numbers problem. Now the QB is a RB, and the back beside him blocks, but otherwise the plays they run are exactly the same as ones where the QB is handing off to a back. Zone read teams that are successful have a QB who can run, meaning there are 6 blockers and 6 defenders in the box with a Nickel set and the QB is unaccounted for. If you simply drop your FS/SS in the box, you put him at a disadvantage in pass defense. A good OC will see what you do and simply call a play action pass with the same blocking scheme as the zone read.

The typical strategy for defending the zone read is the scrape exchange between the backside End and the backside LB. The other is to have the End sit (to wait without attacking) and have the backside LB take the cutback lane from the RB, effectively making the play into the usual inside zone. I have seen Kevin Steele run both. You take the 2nd way when the QB is extremely dangerous, otherwise use the scrape exchange. Always make the less-talented runner keep the ball.

The scrape exchange is depicted here:

The QB is reading the End, as the youtube vid above explains. In the exchange, the LB comes around to cover his gap and hit the QB. But what isn't depicted is the veer block by the Tackle on that side. The End is unblocked, or barely chipped, and that Tackle goes inside (veers) to take out the LB thats coming around. What has to happen to make this work is the block-down-step-down by the End. 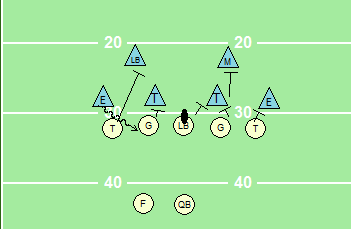 The way I've drawn this, the DTs are playing 2i-techniques on the shoulder of the Guard. There will be a double team to one side, usually on a Nose Guard. One of the OL on the double team will release to the 2nd level. The backside End is stepping down the LOS.

Block-down-step-down is a rule that defenders on the line are taught that tells them to step down the LOS (down is towards the Center) keeping their shoulders parallel to the LOS and when the OT blocks down. Thats the rule, now modify it to have him squeeze the OT, and prevent him from going to the 2nd level. If the OT gets a free release inside he's going to hit somebody and take out one of the LBs. You don't want him getting a totally free release. If the DE steps down, he can be close enough to get the RB before he cuts upfield. If he can force the QB to step back, if he pulls the ball back to his chest, he's given his LB enough time to get off that block from the Tackle. 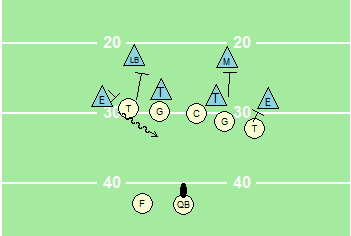 The backside LB has to attack the OT with his inside shoulder (his left shoulder here) and come off the block to make the play. He must get free of the blocker.

If you dont BDSD, the End will go for the QB sack and the RB will cut back behind the OT and go a long way.

The 2nd strategy is to have the End not move and that will dictate the Give to the RB by their QB. In that case the backside LB must attack the OT with his outside shoulder and get through the first available backside gap (though his assignment will be be the backside A in the UNDER, he must scrape to find an alley to get the RB) to take away a cutback. The frontside LB also has to get off a block and charge into his gap (B-gap here) to make the play. 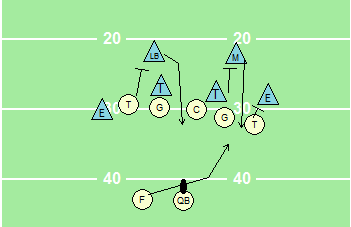 My preference is to set the front to the backside of the play. In the Under you have the MIKE LB lined up between the NT and the End and covering the B-gap, shift that End to a 4-technique heads-up on the Tackle to keep him from veering easily. The WILL lines up off the Off. Tackle, between the 3-tech and 5-tech End. What you want to do is set that side to the RB. If the 3-tech plays it right, you take away the backside cutback lane with him, and his presence just inside the backside Tackle squeezes his movement and forces a combo block (double team), leaving WILL enough time to scrape around. If they check the RB to the 1-tech side, you have to stem the front to adjust. Also, begin the alignment in a 5-2-2-5 (as in the above diagrams) and shift the tackles left/right just before the snap. 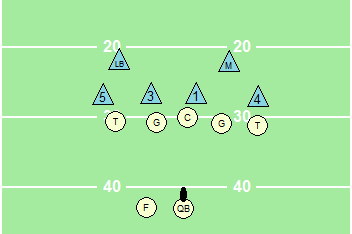 However offenses can adjust to these things, and the original zone read has been changed up by other coaches with motion, shifts (for example an end-around fake in the backfield), adding H/TE as blockers, crackblocks on the LB, or even adding a 2nd back that will break the defender's keys. Other than teaching your defenders discipline, theres not much to do about keybreakers, so how do you attack the zone read in that case? You have to muck up the QB's reads.

For example, tell the LB to keep his usual assignment. No change for him, but tell the End to run a stunt inside. Remember the whole play is based on reading that End. He squeezes the OT more, and the OT can't get inside him quickly enough to hit the LB squarely. Then the End comes down hard on the QB to force the give or if the LB has already, take the RB. Various End stunts like this, or zone blitzing the backside, will confuse the reads. 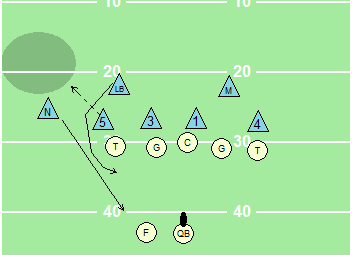 Crossread the play with various personnel - From the Dime, bring the SS down over the RB. This gives you a speedier player, namely DeAndre McDaniel, covering the same spot that WILL would cover. If the QB hands the ball out, the MLB immediately goes to the RB and the SS to the QB (not waiting for the handoff). Another way is to align the OLBs wider than the Tackles, making it almost impossible for the OT to block them, and then send them off the edge for the QB. Either way this exchange lets the DE take the RB without worrying about what he's supposed to do. 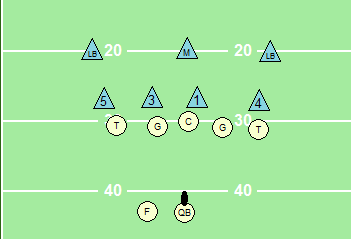 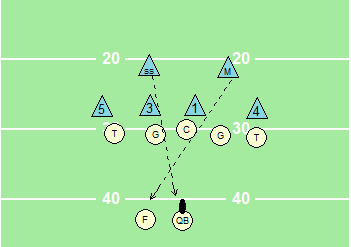 The easiest option, and my second preference, is to just blitz the piss out of them. Blitz the Nickelback or SS off the backside often enough, telling him to flatten that QB no matter what, and they'll stop calling zone reads. Youre at a big disadvantage if your defense can't cover man/man, but it'll make that QB think.

What else do we do wrong? Clemson likes to play rush games (stunts) with our Tackles, and our Ends want sacks. Basically they all want sacks, and they don't stay where they need to be, which is controlling the blocker and spilling the ball to the LB's assigned gap so he can make the play. Additionally the 3-tech can't get manhandled in the above alignment, he has to take away the cutback lane in case that backside LB does get blocked.

I stated above what happens when the End is too eager for the sack, but this hasn't been as big a problem as the LB play.

Clemson LBs don't get off blocks well, and don't charge into the correct gaps. The latter is coaching, and if you want to blame Steele for that, then by all means. You won't sound as dumb as those who say "Steele doesnt know anything".Some of the former is coaching, but also personnel deficiencies (300lb Guard vs 220lb MLB?). I've seen us try most of the above schemes, but if the LB gets blocked by that OT and can't get off, or can't make the tackle, then your scheme doesnt matter.

As always, you pick your poison. If you blitz, you have either zone or Cover 0 behind it with one less man. If you bring up the SS, you take him out of coverage. If you always crossread, then the offense could just tell the OT to block the End, and have the QB read the LB instead, or call a counter. There are always trade-offs to make.