We began discussing the Pistol formation back in the Spring in anticipation of its use here in Tigertown this season.  Now we go back for more, searching for some core rushing plays and strategies to be successful moving the football out of this relatively new look.  To recap its advantages, the Pistol is an abreviated Shotgun look with the back lined up directly behind the QB.  The QB can then utilize the positives that the Shotgun gives him without a back shading to one side or another.  Unlike the Shotgun, the QB gets the ball about a yard closer to the LOS, allowing him to make a quicker decision/play on the defense.  This setup also allows the running back to take a hand-off as he is running towards the LOS.

Chris Ault's initial basic running plays revolved around an inside zone, outside zone, and a misdirection play.  We are going to discuss Nevada's original basic rushing plays to start with because they are extremely straight forward and should give you a pretty good realization that this formation really simply gets the ball to the back faster so that he can make better (quicker) decisions.  As you read this, please keep in mind that the "Pistol" gives you the versatility to run pretty much any play you want and block in any fashion that you want.

The first two plays we will discuss involve zone blocking.  Hence, here is a quick refresher on some basic concepts.

The TE can be used in one of many ways.  If playside, he can have playside "D" gap responsibility.  If backside, he can have backside "C" gap responsibility.  The illustration below for the inside zone play shows the TE lining up playside then coming across  the formation to pick up the previously untouched backside end, effectively sealing the backside "C" gap.  I will not get too deep into the topic of zone blocking but will say that the core concepts involve gap control and combination blocks to gain an advantage at the LOS.  These two concepts allow the linemen to get temporary double team blocks AND a hat on the defender at the next level.

This play is pretty basic and is blocked in a similar fashion as most inside zone plays.  The aiming point for each blocker will be the center to inside of the defender and the linemen will follow the general rules listed above.  If there are uncovered linemen, the lineman closest to the backside will get to the next level after participating in the combo block.

At the snap of the ball, the RB takes a playside zone step as the QB opens playside.  The RB gets to the QB and the QB places the ball in the RB's gut.  The QB should then proceed with bootleg action in an attempt to momentarily  freeze the backside end and possibly a linebacker.  The running back should be square to the LOS the entire time.  The RB reads the flow of the play paying extra attention to anticipated combo blocks that could arise based on the defense's presnap alignment.  The running should also know where the "bubble gap" (gap defended a linebacker or safety and not by a down lineman) is so that he can properly anticipate where a temporary combo will be AND who will most likely be attacking the next level of the defense.

The back (after taking the hand-off) will work towards the inside of the playside tackle and will then go through his progression looking for a hole to hit.  Most backs are coached to read from A gap to B gap to C gap in this situation.  It is very important for the back to stay patient and run to the first sign of daylight.

Like many zone-based rushing plays, this inside zone play maintains the potential for the RB to cut back against the grain of the play if there is nothing promising playside.  It is very possible that the back could easily get to the backside "B" gap in his quest for yardage.

An unwritten rule that I like regarding this play is that the back should be limited to only one cut.  This rule eliminates the possibility of the back dancing to or in the hole and requires the linebackers to commit to their gaps (which makes blocking these defenders a lot easier).  ONE CUT, and this cut should not be made until the back is at the LOS.  The inside play is designed so that you should not lose yards anytime you run it.  Consequently,, I would expect the back to hit the playside "B" gap if there is even a glimmer of light there.

Obviously, inside zone plays do not work as well against teams that get good gap penetration.  It is recommended that this strategy be implemented moreso against quicker defenses that read and flow well, as this interior rushing tends to mitigate a defense's team speed by keeping the ball in the middle of the field. 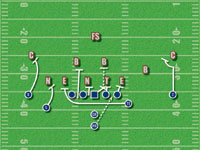 Outside zone plays follow the same basic rules listed above with a few general guidelines that should be followed.  The aiming point for the block is the playside shoulder of the defender.  Also, covered linemen who will be receiving help in the form of a combo block should attack the outside shoulder of the down lineman.  The uncovered lineman providing help in the combo block should be prepared to maintain the block to allow the outside lineman to the next level and block a pursuing backer.  In order for this to work, the uncovered lineman will need to run a wider track to execute his reach block while the covered lineman attacks the defender's outside shoulder and gets to the next level.

At the snap of the ball, the RB takes a playside zone step as the QB opens playside.  The QB gets to the RB and places the ball in the RB's gut (this may look similar to the old stretch play that the Broncos made famous in the mid- to late-90's).  The QB should then proceed with bootleg action in an attempt to momentarily  freeze the backside end and possibly a linebacker and to set up play action later in the game.

It should be noted that many coaches tell their backs to read the last man on the LOS.

Once again, the back should be limited to ONE CUT.

Outside zone plays do not work as well against teams who read and flow well.  These teams are usually very quick and have a very good front seven that can cover a lot of ground and play good fundamental defense.  It is recommended that this strategy be used when defenses commit to stopping anything that may happen between the tackles.  Offenses often try to stretch the perimeter when defenses constantly stunt and slant their linemen or put an extra DL in the game (such as a nose guard). 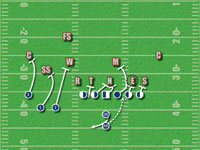 Nevada's favorite misdirection play is called "Horn".  The guys over at Smart Football did a good job of explaining this play and a click over there is well worth your time.

This play looks very much like the counter.  Here, the offense pulls a tackle and the center to try to create seams for the running back.  This also shows that you can block however you wish out of this formation and are not limited to inside and outside zone techniques if you want to run the ball.  As we describe this play, please keep in mind that Nevada only runs this one to the strong side of the formation and always utilizes a TE for this play.

The offense here utilizes a series of pulling linemen and reach/down blocks.  Against the front shown below, the backside tackle executes a down block on the DT and the backside guard will block the backside pursuit.  Playside, we get a down-block from the guard with the center pulling behind him and blocking MIKE.  The TE down-blocks and the tackle pulls behind the TE to kick out the force or SAM.

At the snap of the ball, the back will take a counter step to the backside or will delay.  Like other counter/misdirection, this will get the defenders going in the opposite direction of the actual play AND give the pulling linemen time to position themselves to make good blocks.

In this play, the QB will reverse pivot before making the handoff to the back.  The back then looks to see which pulling lineman he wants to follow.  In a variation of this play, Nevada will pull the center across the entire playside of the line and into the alley.  Here, the back will (obviously) get outside and will hopefully be the beneficiary of the center escorting him down the field.

Unlike many other popular counters and misdirections, this play does not pull a backside lineman across the formation.  By keeping these guys on the backside the coaching staff has assured itself that you shouldn't get penetration from the non-playside in a one back set as the play is developing.  This does not mean that you couldn't make a formation adjustment and pull the backside guard/tackle.

This play is pretty basic and run in all kinds of other offensive sets.  We are discussing it to show that you can do pretty much anything that you already do under center OR out of the shotgun when in the Pistol formation. 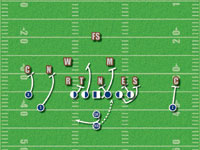 If you are still interested in some basic zone-blocking based plays, Dr. B put together a nice discussion on Clemson's 30-series plays and links to other descriptors of this blocking scheme here.  Further information on the Pistol Formation can be found over at Smart Football also.