Share All sharing options for: The "Bear" Defensive Front

A defensive front that every team has in its arsenal is the "Bear" front. Its a defensive front scheme that is utilized by all defensive coordinators with various personnel groupings depending on what they run as their base front. Clemson is a team that plays a little bit of this Bear or Double Eagle front, but here we're going to apply it to the triple option attack of Georgia Tech.

The Arizona Desert Swarm defense that was so unstoppable over a decade ago was essentially a Double Eagle with a player (an End or OLB) "flexed" backwards, and if you choose to drop the SS onto the line of scrimmage, you have something close to the 46 Defense of the 1985 Bears, where we get the name. 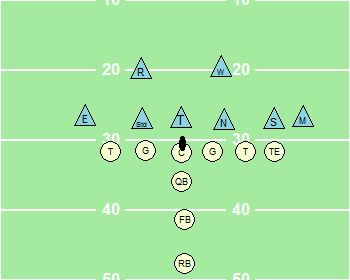 A 46 Front a la the 1985 Bears. The Stud is actually a LB/DE hybrid position and the Rover is a Weak Safety.

Clemson fans over the last year have clamored for us to play a 5-2 front like they did in the old days against mostly option offenses. We already do play a 5-2 front, its called the Under (its also called the Eagle). This front is one in our playbook that puts the OLBs up on the line of scrimmage and one End out to put extra pressure on the veer while the interior linemen handle the dive play. Like the more Stack-style front we played in the ACCCG, it has its weaknesses however. 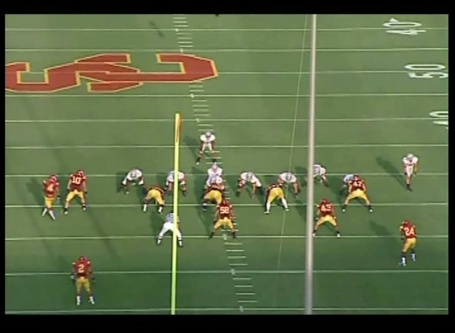 Bear looks like the Undershift (or Eagle) on the weakside of the defense, and it is mirrored on the strongside to become whats also called a Double Eagle. Its main advantage is in clogging up the middle with 3 down linemen playing head-up to outside shade of the interior 3 offensive linemen, a reason why its called a "TNT" front also. Another, because the middle is plugged up, is that your LBs are generally free to roam over the middle. Like the old 7-Diamond Defense that it is derived from (now exclusively a goalline scheme), it has problems on off-tackle run plays. There is no magic scheme to stop the option or the run in general, you must pick which plays you wish to stop and rely on playmaking ability to stop the others.

In short there are only a few fronts in football worth mentioning as a general rule of thumb for most people:

In the 3-4 Bear front, the usual way its implemented, the SAM drops to the line of scrimmage off the T/TE, playing a Heavy 5 or 7 alignment. The SS drops down as well just into the Alley, playing a 9 technique or a 3x3 (3 off the LOS, 3 yards wide of the TE). The interior defensive linemen play head-up at the NG spot, and both defensive tackles can play a 3-technique on the shoulder of his Guard (depicted below) or head-up (a 2 tech). See here for notes on what the numbers mean. 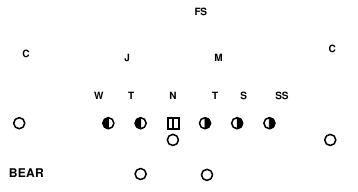 Bear front in a 3-4 defense, similar to the USC defense above.

Because of the alignments of the 'backers and the safety, its suited to more Cover 3 and Man/Man coverage here. SS will take the TE in Man after jamming him, and the JACK/MIKE LBs take the RBs man/man. The safety is free. (Note: in some schemes the WILL and JACK are interchanged, with the JACK being the rush linebacker, like Alabama). Because of the schematic weakness off-tackle, the DTs are moved over the Guard's shoulder instead of head-up, so as to give the defense a chance to attack the B-gap with a DT and stop that off-tackle play before it develops. 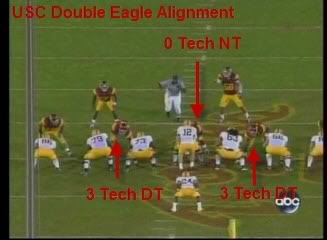 In a 4-3, both safeties are dropped down closer to the LOS to either side and effectively puts 8 in the box as well, but it is more suited to Man/Man in my opinion. Note that the SAM is now inside the End, who lines up off the outside shoulder of the TE in a 9 alignment and has the responsibility for any perimeter run play.

Up front you have the strong(side) LB that plays a 7 technique. His job is to control the C (T-TE) gap vs the run and contain the QB against the pass. To his side is your true DE, who plays a 9 technique and is responsible for anything run off-tackle. Then you have the strong(side) DT who plays a 3 and controls the B gap. You need quickness at that position, not the slow guys. Playing a 2-technique is an option left up to the gameplanning scheme of the Coordinator for that week, but he'll play a 2 or a 3. Next is the NG who plays a 0 and is usually in charge of BOTH A-gaps. Nothing can get past him. The weak(side) LB (or DE if you choose) lines up in a 7 technique and needs to be the best pass rusher. He controls the weak C gap and collapses the back against strong side runs. He is the primary pass rusher against the drop back pass much of the time.

MIKE lines up just off the line, not on it, behind the NG. He stunts quite a bit. The 3-tech for Clemson is Jarvis Jenkins, but Jamie Cumbie was also a good 3-tech. In this scheme, Bowers would probably play the other 3.

The secondary is pretty conventional with a field and boundary side corner. The field corner has to be the best cover man because he will often be one on one with the best receiver and no safety help. The boundary corner is typically responsible for jamming at the LOS and funneling the receiver to the FS. The FS lines up 8 to 12 yards from the LOS and has center field duties against the pass. He also has to get up quick against the run to play the alleys. The SS is actually a hybrid S/LB. Against the pass, he jams the TE and funnels him inside to the FS 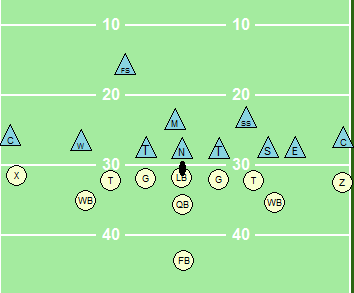 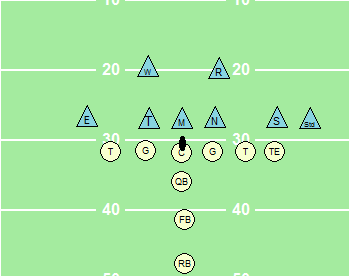 Another representative Bear front, again the Stud is a hybrid DE/LB position. Here we move the MLB onto the LOS and have him attack the Center directly. You need a larger MLB to handle this however.

Against most pro-style or spread-passing teams this is just a front for variety or in definite-run situations because its not so hot in pass coverage. However, this front takes away the Midline Option from Georgia Tech. In my copy of Paul Johnson's Ga Southern playbook, he specifically states (to the QB) to check out of the Midline play whenever the DTs are playing 2-techs; he still does it today. If you can stop the Dive as part of the OS/IS Veer option, and then take away the Midline, you force them to run the QB in the option around the perimeter. If the QB is unable to throw to take pressure off, you have forced them into their playcall of the veer. Then you tell the Ends/OLBs to knock his damn teeth in on every play.

Josh Nesbitt throws like my Junior High QB, and with Clemson's DE talent, this should be doable, but the key is in the LB corps, one of our weaknesses. The SAM is going to have to be able to attack the OT, and Quan Christian is probably not yet up to that on every down. However you can run another Strongside End in his alignment instead.

As I stated, the LBs are usually free to roam because of the interior alignment. The OLBs still have to deal with a Tackle (who may be veering to hit MIKE) or the Wing/TE. If they get pinned or kicked out well enough, either the option pitch man or the QB will be uncovered and he'll go a long long way. If the Tackle veers, the OLB is free to hit the QB (force) but the Safeties must be there for the pitch because MIKE may be taken out. Generally your MLB will expect the Tackle coming and can get out of the way, but you don't want him assigned to be the force or the pitch defender because he can't get to the LOS fast enough outside. The safeties playing outside have to be careful of crackbacks and cut blocks from the outermost WRs and the Wings. In that case the WB will cut the Corner.

Anytime that you place three of your down linemen inside the tackle box, you are doubling down on shutting down anything remotely close to the center of the field. As with everything in life, there is give and take with this adjustment. You are declaring to the offense that you will not allow them the Dive, and in this case the Midline as well (since it works off the Dive primarily). The Bear front will, by design, place more pressure on your perimeter defensive players. Because you are making it a point to take away play calls inside the formation, your linebackers and secondary players must be able to play good fundamental football, particularly on the edges of the formation. You also must have a quick, agile DE who can provide some help for the secondary/linebackers who are filling gaps they would not fill with other defensive fronts. Thus, the ability of an outside linebacker or safety to provide support on perimeter running becomes extremely important because offenses know how important, if trying to get outside, it is to get an effective seal on the outside free DL.

What you do, especially with a team like Georgia Tech, is remove one of their bread and butter plays and make this team much more predictable because of their lackluster passing attack. When running their offense, the GT quarterback essentially can change the play to any of a handfull of plays at the line of scrimmage. By playing a "conventional' front, the QB audibles in a similar fashion to a college student playing Playstation. He reads one or two keys then chooses the appropriate running play for the situation. This (the bear front) effectively eliminates the midline and (hopefully) the Dive play, forcing the QB/RB to get outside to have any shot at gaining yards. You haven't solved the entire mystery but at least you have taken an important offensive threat away.

Your defensive strategy essentially evolves around plugging up the middle and having quality support from the non-linemen. This means that making the play at the line of scrimmage is extremely important as there is at least one fewer body available to run down the offensive player should he get past the stacked front.

Clemson has already shown that it cannot stop GT simply by shading a guard or making a slight shift. Potentially covering both guards and the center is a legit strategy IF we can get better fundamental play out of our linebackers.

But no defense is going to be effective against the option if you don't put the QB on the ground every chance that you get.