This is one of those topics that really doesn't have much to do with the actual gameplay, but really gets to us here at STS.

At one point in history, the nation saw Clemson's gear and admired it.  The paw helmet with the traditional uniforms got plenty of pub and respect from folks around the country.  Over the past 10 or so years, Clemson has done its best to rival Oregon and '80's South Carolina for the greatest number of uniform combinations for one single football team.  See below, Clemson currently incorporates nine (9) possible uniform combinations which is 7-8 combos more than is necessary.

Why is this a big deal?  Perception is reality.  Good football teams follow tradition and uniforms are part of that tradition.  Quick example:  What will Alabama, USC (So Cal), or Oklahoma wear each week?  Yeah, you can bet your life that these teams don't go off the map with their fashion styles.  Thus, it is important to establish a recognizable brand.  Otherwise, it hurts my eyes (and my heart) to show up at the stadium on Saturday or turn on my television and see this crap.  Had Clemson actually won something worthwhile in purple, I may give a little more of a buffer but that is not the case.

How did this start?  In 1970 Clemson redesigned its look.  The Tigers adopted the Tigerpaw that year then sported orange shirts/white pants at home and white on white on the road.  Coach Ford, prior to the 1980 South Carolina game, brought out the special orange pants and the Tigers upset the visiting Gamecocks in Death Valley.  This uniform combination became a tradition: orange on white at home, white on white on the road, and orange pants for big games at home (if the team deserved to wear them).  The lone exception to this rule was Danny's final road game when he let the seniors beat the shit out of our fine feathered friends in Columbia in orange pants.  And yes, eveybody but Danny must obey these rules (DF has proven himself and consequently can do whatever he feels like doing).

Well, your boy Ken Hatfield decided it would be a good idea to use orange pants on the road all the time and, in 1991 against NC State, to bust out the purple shirt in a win over the Wolfpack (he chose to get his ass handed to him against Cal in Orlando in purple jerseys also).  We did not see the purple in Clemson for another decade and our biggest uniform concern was the blatant disregard for the orange pants tradition.

Then comes brother Tom, introducing all sorts of uniform combinations.  Purple on white, orange on purple, purple on purple, white on purple.  Nothing but ridiculous and almost like spitting in the face of Clemson tradition.

Tom came out and spewed some garbage along the lines of the players like purple and want to express themselves.  That is complete crap, as no one should be able to look like such in public or on national TV.  Newsflash Tom:  I like rocking sweatpants and a T-Shirt, but don't leave home or go to work in that gear because I would look like a fool.

Nothing pissed me off more than the 2004 Carolina game at Clemson.  The university president, IPTAY, the whole lot of them sent out an email to the entire student body and fan base.  They set up a huge ad campaign.  The core message was "SolidORANGE".  EVERYBODY was encouraged to wear their orange gear, well everyone but the Clemson football team.  Yes that is right, on SolidORANGE Saturday your boy Tom Bowden prances this team out in purple shirts.  Apparently Keith Kelly was pissed about this one too, as shown below:

What excuses were given for these stupid uniform combinations?  Tom said that recruits dig the wild colors.  I really think this is a load of crap.  How many times have you ever heard a recruit come out and say "I liked a bunch of schools including Clemson, but what really turned me on to the Tigers was the ability to rock out in purple on football Saturdays"?

So, for the record, this is how Clemson should dress:

National Championship and Big Game (when the team is deserving) Attire:

This is unacceptable and looks ridiculous: 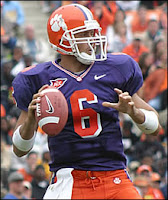