Share All sharing options for: Pistol Formation Part I: Evolution and Theory

You all probably remember the addition of a new formation to Clemson's offensive attack in the Music City Bowl against Kentucky.  This new wrinkle, known as the "Pistol" formation, allowed the Tigers to successfully run the football against the Kentucky Wildcats while not having the quarterback under center. We both like the concept used in this formation, namely that the RB has momentum when he takes the ball and that it forces a defense to play more "honest" in their alignment. Here we will attempt to describe this formation, its history, and the progression that led to the formation's popularity. 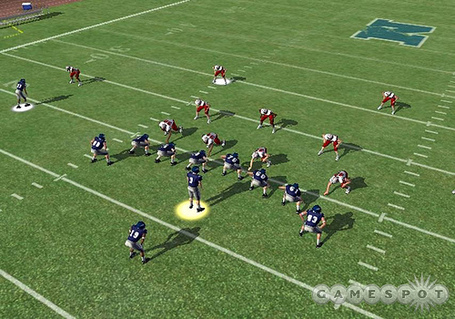 (Thanks to www.sectalk.com for the image.)

The Pistol formation is a hybrid formation that utilizes strengths from both the Shotgun and single back (ace) formations.  To better grasp this concept we will begin by explaining the strengths and weaknesses of the shotgun formation and why a team would and would not utilize the Shotgun in certain scenarios.  We will then explain how a slight pre-snap adjustment to this formation (resulting in the Pistol) maintains the shotgun's strengths and mitigates its weaknesses.

The shotgun formation, in its modern form and usage, originated with San Francisco head coach Red Hickey in 1960 (The true age of the Gun goes back far further into option/single-wing football). His version was really a glorified variation of the old double wing formation and did not originally gain popularity.  The New York Jets employed this formation after Joe Namath could not move as well due to injuries, as the shotgun allowed less mobile quarterbacks more time to set up as the qb was already lined up in the backfield.  Tom Landry popularized the modern formation by showcasing Roger Staubach and the seldom-used shotgun formation in the mid/late-'70's.  Landry's version employed a running back next to the QB to allow for a rushing threat in the backfield.  Landry and the 'Boys utilized this mainly in 3rd down situations.  The shotgun has become a common formation in all levels of football since Landry reintroduced it in Dallas.

The shotgun formation is extremely popular in passing situations because the quarterback receives the snap in the backfield and not under center.  Strengths of this formation are designed to benefit the passing game and a less mobile passer.  The quarterback enjoys having a better pre-snap view of the defense and enjoys more time in the pocket by receiving a direct snap.  This direct snap also mitigates most footwork necessary for the QB to get into position in the pocket, as he is positioned there pre-snap.  The shotgun typically puts a premium on quarterback arm strength, not mobility, when in use. The best example I can recall to illustrate this point is the Dolphins use of Dan Marino late in his career.  Here, Marino was nearly immobile in the backfield and relied solely on his rocket arm and quick release to make things happen.

Weaknesses in the formation are derived from most areas not associated with pocket passing.  Because this formation is generally used in passing situations (and benefits passing plays more than running plays), opposing defenses key on the pass and often employ 5+ defensive backs due to the high probability of a pass and limited amounts of quality rushing plays that can be run out of this formation.  Offenses have fewer rushing options for their running backs out of this formation.  Further, the position is not conducive for a "traditional" rushing game as the backs must wait for the play to develop and are not generally moving forward when they receive a handoff.  Typically, running backs are most utilized on draw plays and screens.  Overall, trap and sweep plays take way too long to develop out of the gun and are often shut down in the backfield, though some teams do manage the inside trap well, particularly the Oregon Ducks or Rodriguez's West Virginia teams. Additionally, play action is not as effective out of the gun.

Contrary to the shotgun formation, a typical single back formation utilizes the quarterback under center and a runningback in the backfield.  Such a formation requires the QB to drop into the pocket during passing plays.  This drop takes more time for the QB to get into the pocket and get a comfortable & quality read.  It also emphasizes the QB's footwork to get into position in the pocket.  On the flip side, having the QB under center assists the running game as it gives the offense more options when running the ball, both for the players and for those calling plays.  Running plays don't necessarily take as long to develop and the running back can take the handoff moving forward.  With a more valid threat of a rush, play action becomes a much bigger factor out of such a formation.

In a nutshell, the shotgun is extremely useful in passing situations, but handicaps an offense's ability to run the ball.  With this rushing deficiency, defenses do not respect the run, lessening the effectiveness of play action.  The single back formation increases the offense's ability to run the football but eliminates the advantages gained in the passing game from the direct snap.  Both offenses give the opposing defense a clear visual of the HB presnap.  The Pistol was developed in an effort to combine the passing game advantages gained from the Gun with the positives in the rushing game associated with a single back set, this is why we like this formation as opposed to just sticking with the shotgun.

The "Pistol" formation was devised by Chris Ault at the University of Nevada and made its debut in the 2004 Wolf Pack football season.  Ault was eager to find a way to run the football despite playing in the WAC conference (notorious for its passing offense).  Ault wanted to utilize basic zone blocking techniques but wanted to get the ball to his running backs quicker with the running back accelerating towards the LOS.  Ault realized that by placing the QB in the backfield the time needed for the quarterback to get to the RB was reduced.  He did not, however, want to utilize a traditional shotgun look in which both the QB and RB were positioned 7 yards in the backfield because such a formation caused the play to develop slowly.  The Coach also wanted his back running downhill when taking the snap and consequently positioned the QB directly in front of the back (QB 4 yards behind the LOS, RB 3 yards behind the quarterback).  The result was the "Pistol" formation, shown below in a 4-wide spread formation that is very similar to a typical ace formation. 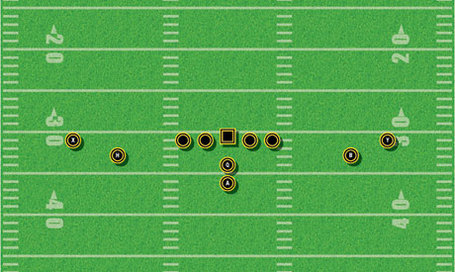 (Thanks to www.americanfootballmonthly.com for the image.)

Ault wanted to maintain a spread look out of its new offense.  His offense also utilizes a variety of formations out of a base 3 WR, 1 back, and 1 TE (often flexed) set.  By spreading the field, the offense maintained distinct advantages in the passing and running game.  One of these advantages is spreading defensive personnel to help an undersized offensive line.  Another utilizes the position of the hidden back (placed directly behind the QB) to keep the backers--who commonly key on the RB--honest as they cannot get a good look at him at the snap of the ball.

The original Nevada offense's rushing attack was designed around core zone blocking principles.  This attack consisted of three base running plays executed out of a couple of different looks.  Ault utilized a basic inside zone, an outside zone, and a misdirection play.  From these plays, the use of spread formations, and hiding the RB behind the QB, Nevada was able to implement successful play action out of the Pistol.

This offense has evolved into a scheme used in both high school and in a limited role by the pros and has evolved to utilize more spread concepts.  Teams with true athletic quarterbacks have adapted concepts of read option and various counter plays.  Once again, the design of the formation allows flexibility and keeps the opposition honest while implementing these newer plays.

A newer offense that has been developed utilizing the Pistol formation is the Ski Gun (or Skee Gun, as it was originally developed by a High School in Muskegon, Michigan).  The core idea behind this "Ski Gun" runs a version of the triple option as its base play.  From the looks of it, it is the Wing-T with the QB in the backfield.  Hence, the Pistol formation can be unitlized with almost any existing scheme.

In a future installment, we will focus on core plays run out of this offense then dabble into some unique aspects that this formation opens with individual player types.