Now that we know some of the basics of the 4-3 defense, we can address other aspects of defensive game play including defensive play calls, coverage calls, and various in-game adjustments. The first two questions that many of you are probably asking is what is a base defense and why would you choose the 4-3 as your base defense? A base defense is a defense that is utilized in "normal" conditions and the standard platform (i.e., identifies positions, quantities of such positions, and core alignment strategies) by which the defense will operate. All of these items are important when creating strategies as well as evaluating need areas to be filled in the recruiting process. Normal conditions can be thought of as 1st and 10, 2nd and 6, 3rd and 4 scenarios that are common during a football game.

A base defense is chosen based on a team’s personnel and its coordinator’s defensive philosophy. Clemson, for instance, utilizes a four man front instead of a three man front (often used in a 3-4 defense) because the Tigers have a really good group of down linemen (DT’s and DE’s). Further, the Tigers have more quality depth at the down linemen positions when compared to the linebacker spots, so it makes a lot more sense to employ such a look.

How does a defense know what formation to line up in and where to go? As mentioned earlier, the 4-3 will be utilized in "normal" scenarios. During the course of a game, however, an offense may get into abnormal situations (for instance a 2nd and 20 spot, goal line/short yardage situation, or at the end of the half/game where the offense needs to gain yardage quickly to set up a field goal before the clock expires) that may dictate changes in on-field defensive personnel. A common occurrence would be 3rd and long situations where the offense will more than likely pass the football to try pick up a first down. In such a situation, it is common for the defensive coordinator to play a defense that incorporates more defensive backs than linebackers to try to cover the highly likely forward pass. Here is a general overview on how this process is completed from an administrative stand point.

During the week, coaches do several things to prepare for upcoming games. The initial portion involves watching film, understanding the opponent’s strengths/weaknesses, and identifying patterns/tendencies. The defensive coach then comes up with a strategy to mitigate the opponents weaknesses and anticipate game play based on what an opponent has done previously in similar situations. While all the coaches contribute to this process, generally the defensive coordinator pulls together a total game plan and dictates strategies for individual situations. This strategy is then conveyed to the players at practice and through meetings.

As part of this strategy, the coordinator will create personnel packages (differing from the base package) that he will use for different scenarios. A common example of such that effects the defensive backfield is the "nickel package". This personnel package involves the use of five defensive backs. During the week, players will be briefed on typical situations that will warrant the use of this "nickel package" during the week’s game, and will thus be cognizant during the game of such scenarios. When the coach wants to change the personnel on the field, the coordinator or another coach can usually be seen running up and down the sidelines screaming the name of the new package to players on the bench and on the field. The players then know who should be on the field and shuffle on/off accordingly. It should be noted that the defensive coordinator makes this change in anticipation of what the offense will do and what formation/personnel he thinks the offense will utilize.

There are several ways that a defensive coordinator may get the play to the players on the field. Teams that constantly (mostly) utilize base their package may huddle (note, it is common for just the front four and linebackers to huddle, as DB’s often have further to go to get into position and often base their coverage on the offensive look given). The middle linebacker usually gets a signal from the sidelines and relays the defensive call to the defense while in the defensive huddle. Otherwise--if no huddle is utilized--the entire defense will look to the sidelines and get the defensive call. Items included in this call could include blitz schemes and basic (man or zone) coverage calls. Once this information is communicated, the defenders line up and await the offense.

The defense will make further adjustments once they see the offense line up. The free safety usually dictates the defensive coverage adjustments. The FS looks at the offensive alignment and the offensive personnel package and will then call out the coverage to the secondary (and possibly the LB’s). When the safety makes a call, he repeatedly looks around and yells out a coverage scheme. It is the responsibility of the other defenders to ensure that they know the coverage. You will often see a corner call back or signal to the safety the call to ensure that the correct coverage will be in place. These coverage calls are dictated through basic defensive philosophy and through the research that the players/coaches have done on the opposition prior to this play.

Adjustments at the LOS can be extremely simple. If the offense shows a simple "Twins" formation (an alignment that utilizes two WR’s on the same side of the formation), the FS will first identify the formation and may call for Cover 3. With this coverage call, the defenders will recall previous instruction from the coaches and move into the appropriate postitions.  Please keep in mind that the core zone concepts will not change and will remain consistent with our last discussion on zone shells.

This position adjustment will push the SS closer to the LOS and roll the corner deeper into the defensive backfield (essentially another safety). The FS will realize that he may need to provide more help on the Twins side of the field, and will shade (or slightly cheat) to that side of the field. In the example below, the TE is located opposite the Twins. The corner then lines up on the TE’s outside shoulder 10-15 yards off the LOS. In this scenario, the rolled up corner will be responsible for approximately ½ of the field (the area from the center of the field to the boundary on the TE side. The FS and the other corner each be responsible for deep coverage on the other half of the field, with each defender effectively taking ¼ of the total field each. 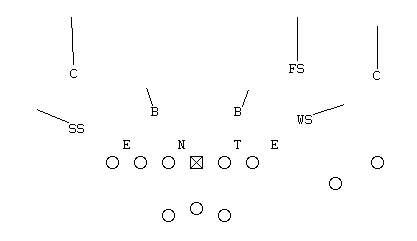 Scenario 1: The defense is in a "normal" down and distance situation. There is no blitz called by the defensive coordinator. The defense is trying to make the QB stay patient and work for a completion through his progression. The FS will call a Cover 2 defense, causing the formation to remain the base 4-3 look with each defender having zone responsibility. 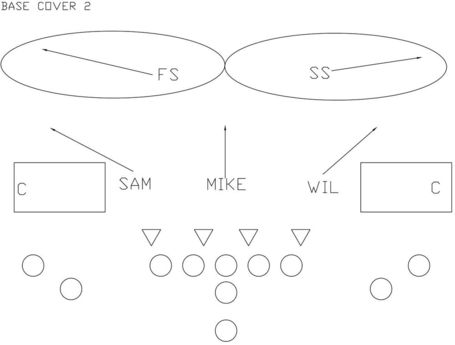 Scenario 2: The defense is weary of a deep threat, but still wants to take away intermediate routes. There is no blitz called. The safety calls a Cover 4 defense and the defensive formation remains base 4-3. 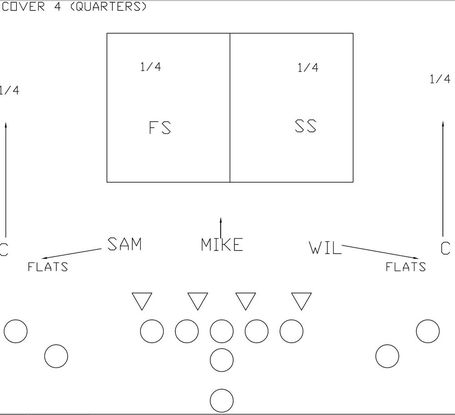 Scenario 3: The defensive coordinator calls an inside blitz. The situation makes the FS weary of a deep pass. To free up one of the inside linebackers to blitz, the FS calls a Cover 1 defense. The corners are both man up on the split receivers (located on the outside of both sides of the formation), and the SS and WILL in man to man coverage on the slot receivers. The non-blitzing LB will have man coverage on the back and the FS will be playing centerfield to give help on deep routes. 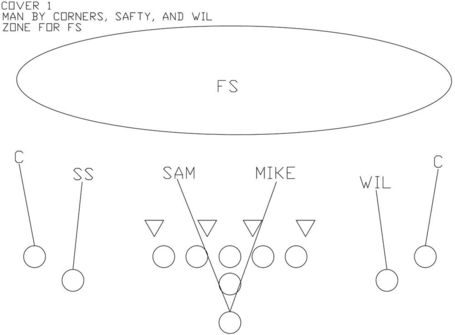 Scenario 4: The defensive coordinator calls a blitz coming from the QB’s blindside (we will assume the QB is right handed), so the pressure will come from the left side of the formation. The safety sees the need for extra support on the "Twins" on the right, but is confident he and the corner can play man to man defense on the blitzing side. The safety then calls a combination coverage--man on the left side, zone on the right. The FS will cover the slot receiver on the left and the corner will cover the split receiver on the left, both in man coverage. The corner, WILL, and SS will play zone on the right. MIKE will drop to provide support on receivers running underneath crossing routes. 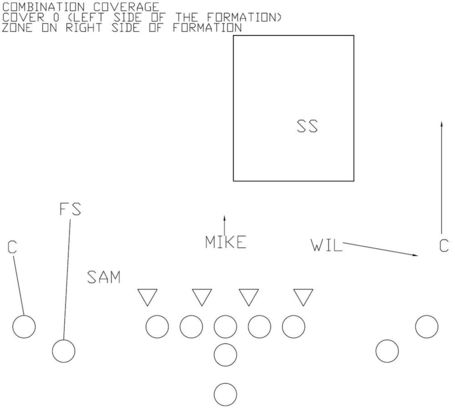 Scenario 5: The defense is backed up close to its own goal line. There is little need for deep help, and the defensive coordinator wants to utilize the linebackers for run support or to blitz the QB. The FS calls a Cover 0 defense. This defense employs all the defenders in man to man coverage, with one of the LB’s having responsibility for the back. Both the FS and SS will creep up to the LOS and leave the linebackers free of zones and WR responsibilities. 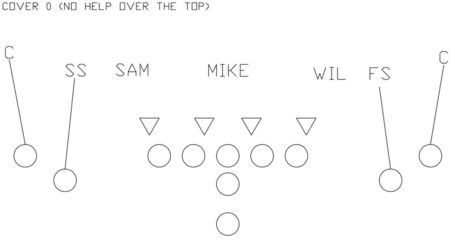 As shown above, the defense has various looks that it can give the offense from its base personnel package.  This also shows how a defense can respond to different situations and scenarios during game situations and how the coverage call can be made at the LOS.

This post is designed to give the reader a better idea of how a base defense is chosen, how/why players are being shuttled into the game, how the defenders know where to line up for a play, and how the defenders know the coverage that will be used for a particular play. We will get into more complex scenarios and individual situations that will arise during a game, but felt that these administrative topics were worth exploring first.