Alignment, Coverages, and Basic Wrinkles for a 4-3 Defense

Share All sharing options for: Alignment, Coverages, and Basic Wrinkles for a 4-3 Defense

We discussed basic fundamentals for defensive back play earlier, and now want to get into some base formations and base coverage schemes. Here we will discuss a base 4-3 look and some wrinkles and adjustments that a defense will show based on various offensive looks. Pay attention to the secondary strategies because we will refer to these looks as we progress. This is meant to be a foundation topic, and we will expand these basic strategies in future articles as we discuss wrinkles and combinations utilized in basic in-game strategies.

Let’s begin with the absolute basics, what does the 4-3 entail? A 4-3 defense is a defense that incorporates four (4) down linemen and three (3) linebackers. You will also see two (2) cornerbacks, one strong safety, and one free safety. Generally, the four down linemen consist of two DT’s and two DE’s. You will see a SAM (strong side) linebacker who will be positioned on the same side of the position as the TE, a WILL (weak side) backer playing on the opposite side of the position as the SAM, and a middle (MIKE) LB who plays between the two. SAM is usually lined up head up or on the outside shoulder of the TE. WILL is usually lined up outside of the tackle. Corners will flank the perimeter and typically line up 5-7 yards off the ball, and safeties behind the WILL and SAM at a 10-15 yard depth. See the base 4-3 look below. 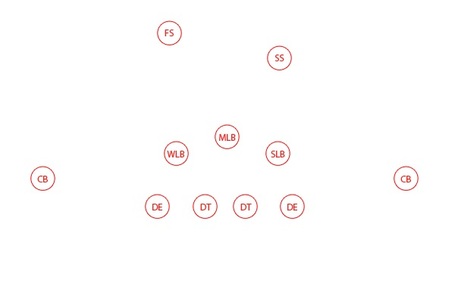 One of the simplest and most common looks that you will see out of a 4-3 defense is a two-deep zone, or Cover 2 look. The defense is called a two-deep zone because there are two defenders (the safeties) who ultimately are each responsible for deep threats (areas 12 yards or deeper from the LOS) on ½ of the football field. Other defenders are responsible for areas underneath. The cornerbacks have responsibility for the flats--the area outside the tackle box within 5 yards of the LOS. The linebackers fan back to cover the areas between the flats and the deep halves. The MIKE backer here has a critical job of rapidly dropping into his zone to protect the middle of the field (what is known as Tampa 2 is actually Cover 3, the MLB drops considerably deeper). 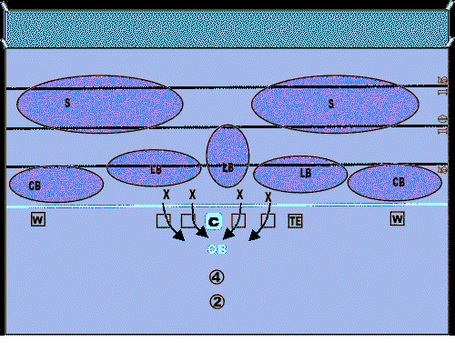 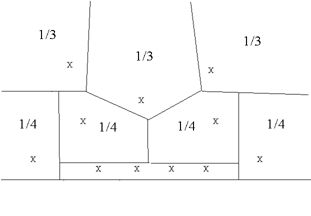 A variation of the zone look employs both man and zone coverage schemes in the same defense. This defense, known as cover two man, requires the two safeties to continue to each have deep ½ responsibility while the underneath players (the corners and linebackers) play man to man coverage on the receivers. Lots of teams like to play this with twin sets to one side of the field, as it minimizes some confusion involved with receivers running in and out of multiple defenders’ zones. You must be careful employing this defense because you could very easily have a slot receiver being covered one-on-one by a linebacker (this is why Steele often chooses to go Nickel). While you have safety help, the receiver clearly has an advantage in this situation. Further, offensive coordinators will recognize this advantage to optimize their personnel in such scenarios.

The cover two defense gives the cornerbacks a lot of options and allows these players to help with perimeter run support. It also takes away the short passes and forces an offense to challenge and stretch the zone to be successful. The weak spot of this zone is the middle of the field (also why Tampa 2 was invented, it helps this deficiency). If you can get the safety to shade (or drift during the play) towards the boundary to cover a deep receiver, another receiver can easily attack the middle of the field (also known as the seem). The safety is then forced to choose which receiver in his half of the field he will cover. You often will hear folks discuss the soft spot of a cover two zone and now know they are talking about the center of the field over 15 yards downfield of the LOS.

Another common defensive zone strategy is called quarters coverage (or cover 4, as this is a four-deep zone). Quarters coverage, as the name implies, has the defensive backs each having responsibility for ¼ of the deep coverage, with the linebackers being responsible for underneath coverage. As shown below, the both corners and both safeties have deep responsibilities. At the snap of the football, each of the corners (again playing approx 7 yards off the ball) will immediately drop into a backpedal to get into position to defend his zone and read the patterns. Likewise, the safeties will get a little drop, with each player keeping keen observation of what is going on around him. Both SAM and WILL have underneath flats responsibilities and MIKE will get a small drop and cover the middle underneath routes. 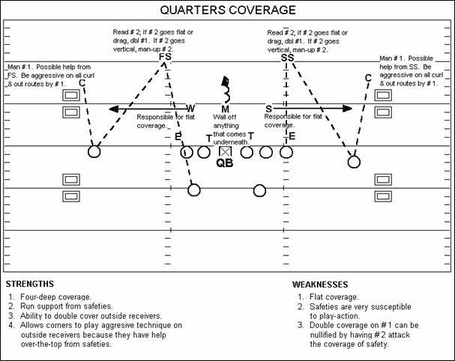 We'll have more on C4 later when we get into pattern recognition.

There are many variations and wrinkles that can be thrown into this defense to confuse offenses and respond to individual scenarios. A common and popular wrinkle to the base 4-3 Cover 2 defense is known as the Tampa 2, which is a specialized hybrid 2/3 deep zone look that relies heavily on specific player types. We don’t have enough time to get into this detail or wrinkle today, but may investigate this item in the future after we have exhausted the basics.

As we mentioned earlier, the 4-3 defense is less suited for run support than other schemes because of the lack of (LB) bodies in the middle of the field. Thus, defensive coordinators saw this issue and began sliding their strong safety closer to the LOS to help with run support, effectively turning the SS into an outside linebacker (OLB). By moving the SS closer to the line (either in a pre-snap set or creeping him up at or just after the snap), the defense essentially shows a look that is extremely similar to a 4-4 (four DL and four LB’s) and consequently will utilize most of the coverage techniques used in a 4-4 defense. For this exercise, I may refer to certain sets as a 4-4 set when, in fact, the personnel is derived from the 4-3 with the SS lined up at linebacker depth.

Commonalities between the two looks include four down linemen (two DE’s two DT’s) and two corners on the perimeter playing 5-7 yards off the LOS. You will have a free safety (FS) positioned about 12 yards off the LOS. Since the SS will be moved out of the deep position, the FS will need to shade (or position himself) more towards the strong side of the offensive formation. The safety will cheat a little this way because there are more eligible receiving targets there and thus more potential passing options to this side of the field. The position of the linebackers is the real difference here, as the SS will typically move to LB depth (around 3-5 yards off the LOS) on the strong side of the field. He lines up on the strong side of the field because he is a better pass defender than SAM on the most eligible receiver side of the formation and gets run support from SAM who is lined up immediately inside of the SS. SAM will essentially be shifted inside and play head up on the offensive tackle (OT). MIKE will also shift to play head up over the offensive guard (OG) and WILL typically plays about 3-5 yards outside of the OT. 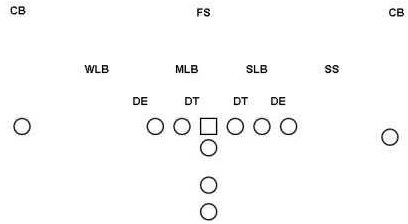 At the snap of the ball, the corners (starting around 7 yards off the LOS) will immediately drop to try to get in position to cover the deep third. The SS/WILL will probably first read run, then move out to the flats with each player keeping his head on a swivel. The MIKE and SAM will fan to cover the middle of the field. The safety will also get some depth and should be mirroring/shading the QB (this can be done by watching the QB’s head/shoulders and cheating to one side of the field or another to try to make a play on the football should the ball be thrown down field). 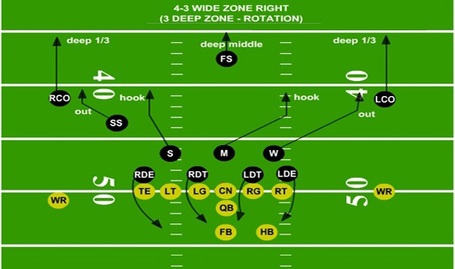 It is also common in some scenarios to have the linebackers playing inside to have back out responsibilities. In a quad WR set, it is common for teams to play man-over, with the corners covering the outside WR’s, WILL and the SS covering the slot receivers, and the FS playing center field. We have covered Cover 3 itself in the past.

Other common base defensive coverage schemes include cover 1 and cover 0. Both of these involve man-to-man coverage. In cover 1, the everyone is in man coverage except (usually) the FS. Corners and the SS have man coverage on the receivers and the LB’s have man coverage on the back(s). The FS is the deep man and provides support over the top for the other defenders. In cover 0, only man coverage is played, with no help over the top by the safety. These defenses are common in short yardage scenarios (defenders--usually LB’s--are not involved in coverage and can focus on the running game), in blitzing scenarios (again, LB’s are not in coverage and are free to blitz), or in four WR sets. Since the defenders will not receive as much help from deep zones, the defenders must be sound fundamentally and be able to match up well with the receivers. Cover 1 and C2-Man are the two primary coverages Clemson runs.

It is extremely important to remember and understand these basic formations and defensive strategies. These will be the core concepts that we build upon to understand how coverage sets work in game situations. From these basic concepts, defensive coaches have developed wrinkles to counter individual situations and offensive player combinations during game situations. These wrinkles involve combinations of these coverage schemes as well as ways to disguise what the secondary is actually doing. It is also important to remember that these pass defense strategies (both zone and man techniques) are utilized with different formations and player combinations. We will discuss how defenses communicate their coverage schemes and how they adjust to different scenarios in a future article.