The 4-out 1-in Motion Offense

Share All sharing options for: The 4-out 1-in Motion Offense

We decided to look at one component of Clemson's motion offense and explain it so that folks could understand just what the Tigers are trying to do out there when they look totally lost on offense. I'm not going to go into that many set plays of the 4-out/1-in set, but will try to give a few to get a flavor of whats going on. Those that know a lot about basketball probably won't get much out of this, and I'm not going so far in-depth that we lose the forest for the trees.

Basically the term 4-out means that there are 4 players playing around the perimeter, with one post player inside. It works much better for teams without great size or those that don't have 2 guys with post ability, or a team with alot of guys that can play the 2G or 3. Think Duke, not Georgia Tech or FSU. It works better if the PF, who will be playing outside, can pass and hit an occasional shot. With Booker's ability to make an occasional shot outside and his athleticism, the 4-out offense can work quite well. I'm surprised Clemson doesn't run this set as much as they could, but it is in our repertoire. What we run more of is the 3-out/2-in (32), with 2 guys posting, but the point I want to make is that we don't have enough variety in our offensive scheme to beat good teams.

Advantages of the 41 offense

Nuts and Bolts of the 41

Start with P1 bringing the ball down the court, while players P2-P4 are all set up outside. P2 and P3 will be over on the wing or in the corners, while P4 will usually set himself at the 3 point line opposite the P1. P5 will start at the high post on the ballside.

Posting up with P5

As the ball is passed around, the P5 must move with the ball and stay on the strongside (ballside), and if the ball goes to the corner, then he drops down to the low post. If the ball comes to P5 up high, then the backside offensive players have to look for a backdoor cut to the basket if the defense triest to prevent the Center from passing it to them outside.

At any time he receives the pass, as this offense tries to make the defense switch through him, the P5 player must make a decision. Either he looks to score or finds somebody that is already running towards the basket, and only if those aren't available does he pass it back out to one of the two men near the top of the key. If its a Guard, then he cannot stand still, because that would let them reset the defense. He has to dribble or look to pass it off quickly.

There are variants on the 41 where you can dictate that the P5 stays down low, or in the high-post all the time.

Say for example they play very good interior defense and the X5 is extremely good in the low post at snagging balls and rejecting shots, for example. In that case, you may choose to play 4-High and take him out of the low post area altogether, and opening up the inside for your guards to attack the basket themselves. Here the P5 would act more as a screener long range shots or drives from the wings, but if they front him up (A-B below), he may be able to cut around behind his defender for an over-the-top pass and easy basket.

Conversely you can play a 4-Low to open up the lane from the top if you have a strong or quick post player. If their defender is also strong, you can back your P5 off and have him take a slightly longer shot, or if he's quicker, then he should be able to fake a shot and dribble around him. It also puts real pressure on X5 if he's in foul trouble because he's isolated down there. If they try to double-team, then someone outside is open for a shot.

The play "Big" on the left is very simple. Notice the arrows first. P1 brings the ball down, while P4 steps to the top of the key. P5 then makes an aggressive move and the pass from P4 must be there. After the P1-P4 pass, P2 screens for P1, and they switch places. IF the pass inside is denied, P4 throws it over to P1 for a long range shot, baseline drive, or a pass inside to P5.

If the defense adapts and denies the P4-P1 pass, you go with "15". In other words the pass inside to P5, one of the two should be open. "Big Left" on the right diagram is the same thing but to the opposite side of the court. If your offense times their passes properly, a defense cannot defend all 3 of these simple plays.

Notice the choice between 4-High and 4-Low really depends on the matchup in the game between the post players, not as much what your outside guys can do because both sets are made to allow for dribble penetration.

Motion offense allows for a lot of quick screens because the offensive players must always be moving. Handoff screens/pick & pop works well in this system. For example, say P1 dribbles to P2's position, screening X2. If P2 steps aside and the screen is made, he'll have an open shot or can drive inside. This is a weave-screen. Diagram A is the simplest example. Eventually the defender on 2 will try to jump into the handoff, so you run Diagram C.

While P1 is running towards P2, the other outside players should be rotating. If he doesnt set the screen then P2 can exchange positions with P1 as he drives along the baseline to the basket. At the same time, P4 can cut and exchange spots with P3 on the wing, who then switches spots with P2 at the top. They could all just rotate as well, as in the diagram below. All of this happens while looking for the ball to be thrown back outside if the dribble-drive fails. The key here is that whenever a dribble drive happens, you relocate yourself. 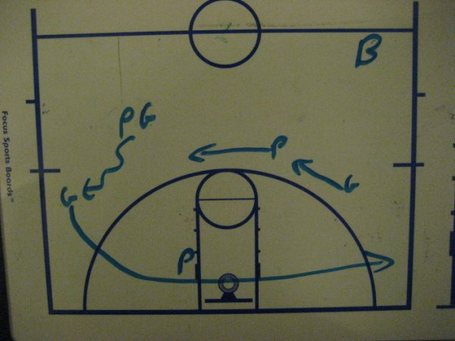 Resetting to the play design again, say the ball is passed to P2, who passes across to P4 at the top. P2 immediately cuts to the basket along the baseline, and looks for the ball back from P4 for a jumper or layup. This is called a give-and-go.

Another quick and easy concept out of this 41 set is the Triangle. Its what the Phil Jackson teams run, though in a much more developed form. Basically the P1 and P2 are forming a triangle with the post player, and then they make a scissors cut around him and there are lots of options for the post player. 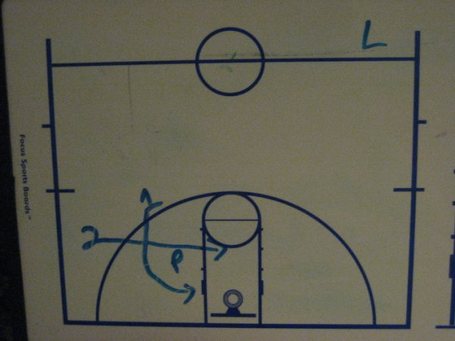 Finally, this offense is based on reads. We have to teach our players where the ball can go and what they must look for from the defense....a pass denied means another is open, a fronting defense is vulnerable to a high-low play, or a team that likes to double the Center leaves open a long shot.

The offensive players with the best talent tend to play well in it, and its not strict about where the ball has to go, so they can adapt easily to anything. But, they still need time to learn the options for where it could go. Once its drilled into their heads their true talent will come out, which lends some hope for the fabulous 4 freshmen.

This is one of the better explanatory videos I could find.