Share All sharing options for: Clemson/USF vs. Miami 2010: Individual Stats

We decided to look at the individual statistics to compare Clemson and USF vs their common 2010 opponent, Miami.  Again, I am having a tough time putting the data out in a good, presentable fashion on the web.  We are working on improvement, so bear with us as we are trying to put programs in place to better display the data.

You will notice that Miami utilized both Jacory Harris and Shephen Morris in the game, with Morris starting and Harris entering the game in a relief role.  The two combined for 2 interceptions and no touchdowns, a stark contrast to Harris' success against Clemson.  Harris tossed 4 touchdowns and 2 interceptions in his game in Death Valley.  The flip side of the quarterback comparison saw Eveld and Daniels avoid throwing any picks while Kyle Parker accounted for three turnovers through the air against the 'Canes.

Miami ran for 171 yards (4 ypc) against Clemson but did not score a TD.  Also their longest rush against CU was a 33 yard scamper by Berry.  USF gave up a 71 yard scamper by Johnson and 2 TDs on the ground.  This accounted for 165 total rushing yards, 4.2 ypc.  Clemson's Andre Ellington had a fine day against the Canes, rushing 17 times for 107 yards and three touchdowns.  Clemson also gave the ball to Jamie Harper 18 times for 57 yards.  USF's Plancher carried the ball 24 times for 101 yards, not a bad day there.

Neither Clemson nor USF had a big day receiving the ball.  Clemson's leading receiver was RB Andre Ellington.  Nuke Hopkins was able to pull in 3 grabs on the afternoon.  USF's Miller had a respectable 4 catches for 60 yards.  Miami's Leonard Hankerson, on the other hand, had big games against both CU and USF.  Hankerson had 7 catches for 147 yards and 3 TDs against the Tigers and 9 grabs for 127 yards against the Bulls.

Turnovers were the big factor in this one, as Clemson gave the ball away 6 total times, losing the turnover battle by a -4 margin.  USF was much more fortunate in this area.  It should also be noted that key Miami turnovers including the late game Harris interceptions keyed the Bulls upset victory.

Gilchrist had a nice kick return and Dawson Zimmerman averaged almost 48 yards per punt on the afternoon.  Fortunately for the Tigers, Clemson did not attempt any field goals.

USF and Miami (sans a missed XP by the Canes) were both good placekicking.  The two squads were a combined 4/4 in the field goal department although it should be noted that the long kick out of the 4 was a mere 29 yards.

Stats After the Jump 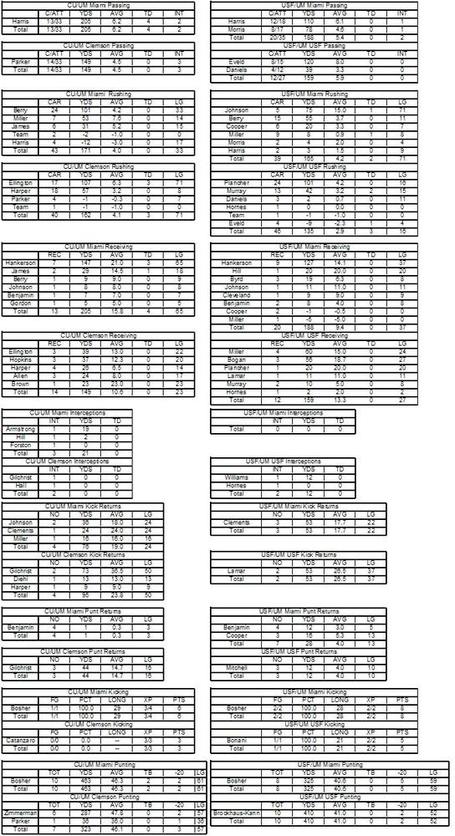