Share All sharing options for: Pre-Bowl Conversation with Voodoo Five

We caught up with the guys over at Voodoo Five as they prepared for their bowl junket from Tampa to Charlotte. They were kind enough to answer a couple questions that we had regarding the South Florida football program, the school name, and coaching situation. I encourage you to visit their site for all things USF.

STS:  As everyone knows, this is Skip Holtz's first season at USF and he followed the successful Jim Leavitt as the Bull's coach. How does Holtz compare to Leavitt and who do you prefer as South Florida's head football coach?

Voodoo Five:  With where the program is right now, I think Skip Holtz is the man for the job. Coach Leavitt did a fantastic job building this program up from scratch, and if he didn't allegedly strike Joel Miller, he would probably be coaching USF for the next decade at least.

The biggest difference between the two regimes is in game planning. Jim wouldn't stray to far from the basic offense and defense from week to week. This was great for our non-conference games against teams like Auburn and Florida State, but when we got into conference play, everyone knew what we were going to before we even did it. This was reason why we always went on a 3 or 4 game losing streak in October and November. The fact that teams had to adjust to what we did instead of the other way around was the biggest change, and I'm happy that its for the better.

How would you rate the season so far for USF, particularly as a transition season? We see some positive wins (particularly against Miami) but also see the 3-4 conference record. Could this season have easily been much better/much worse for the Bulls?

7-5 was right around what we expected this season. This was the least talented team we've had since we've moved up to the Big East, and to compete the way we did was amazing and a testament to our players and the coaching staff. Beating Miami was just the icing on the cake. This season in particular was trying on my nerves. We could have easily gone 11-1 or 3-9 if the breaks went one way or another.

You could see from the beginning that the team was adopting a bend but don't break mentality this season. Time and time again our opponents would get inside the 20, and our defense would make them settle for a field goal or cause a turnover. If it comes to a 4th and 1 to win the game, I feel confident about our chances.

Bobby Eveld became the main man at USF when B.J. Daniels was injured towards the end of the year. I don't know much about Eveld other than he is a walk on and played a critical role in defeating Miami. What does he bring to the table and how is this offense effected (both positive and negatively) with Eveld starting instead of Daniels?

Eveld did a great job playing within his abilities, and didn't try to do too much when he did play. He was drafted by the Mets in the 50th round as a catcher, and he shows his arm on short and intermediate routes. I haven't seen anyone that accurate on those passes since Marquel Blackwell. Eveld has a nice touch with the deep ball, but he keeps it in the air a little too long.

He definitely isn't the athlete that B.J. Daniels is, but Bobby will run if its open, and he is deceptively fast. I'm shocked that he wasn't offered a scholarship somewhere. Tampa Jesuit is a highly regarded school in the state, and at the very least FIU or FAU would have offered.

B.J. Daniels played most of the year and struggled this season compared to last (2009: 14 TDS, 9 INTS 2010: 9 TDS, 12 INTS). What has caused this statistical inversion? Is this a product of a new offense, personnel turnover, injury, etc...and do you think that a new signal caller can improve these stats?

There were a couple of things that held B.J. back this season. First was B.J. getting comfortable to the new offense that OC Todd Fitch brought over from ECU. It's more of a west coast spread, and it took Daniels and Fitch a while to feel comfortable with each other.

Second were a couple of injuries that B.J. acquired throughout the season. Daniels picked up a turf toe injury after during the Rutgers win, and then he injured his quadriceps against Louisville, and then aggravated it at the end of the first half against Miami. He has said he will be 100% for the bowl game, so I would expect him to get the start next Friday.

Lastly, our receiving corps was decimated by injuries and Carlton Mitchell declaring early for the draft. A.J. Love destroyed his ACL during our spring game, and our other starting WR Sterling Griffin dislocated his ankle during summer workouts. We had converted running backs, quarterbacks, and conerbacks thrown into the rotation to stem the bleeding. Lindsey Lamar and Evan Landi did better as the year went on, but for a while it was Dontavia Bogan and everyone else at WR.

Clemson's offense has struggled at times this season. What areas of the USF defense will Clemson need to attack? What areas are the strong points of this defense? Is there any player or player groupings that Clemson fans should focus on?

We play off at corner, so if you throw a lot of slants or 10 yard outs, you'll be able to move the ball down the field pretty quickly. Other than that, we are pretty solid on defense.

I understand you guys have a roadie to Charlotte planned for this game. How reckreckless will this trip be and what do you expect out of your crew on this trip? How well do you anticipate the South Florida faithful traveling to CLT for the bowl?

I'm going to let the leader of the roadtrip Toro Grande take over for this one.

Why yes some of our students will be making the sojourn. And I'm happy to report I'll be chaperoning some of them. How reckreckless they might be... actually, I hope not THAT bad because I'll be accountable for anyone that ends up behind bars, sleeping in a desolate alley, or worse, the Panthers locker room or training facility.

If I recall correctly, we brought a few over 6,000 for our first-ever bowl game in Charlotte in 2005. As I wrote previously, we were just happy to be there during that stage of our development, so we could have been playing Omaha Community College and we would have been thrilled.

I think we'll for sure be under that number this time, as it'll mostly be our diehards, the player families, and of course staff and band. Our attendance has been down all season, and there's no reason to think it won't be for a bowl game in colder weather than we very soft Floridians enjoy. But there is a group of us that plan their holidays around the bowl trip. I'll set the line at 3500 butts in our allocated seats.

Off football topic but I have to ask: South Florida is located in the Tampa area. I am no geography whiz, but Tampa is central to the state of Florida. Where did the name South Florida come from and is this part of a larger dream to rid the state of the greater Miami area?

We get this one a lot, and as far as we can tell, there are four real reasons. 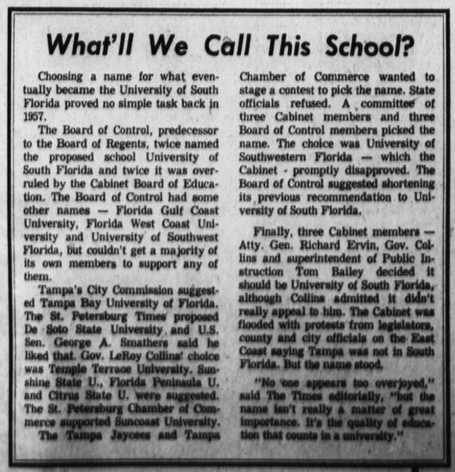 See, I disagree with that last paragraph. The name is really a matter of great importance, because there's NO FREAKING WAY we're in the Big East with a name like Sunshine State University. I think they banish you to Division III for a stupid name like that.
There you go -- that's why it's South Florida. It looks dumb now, but like that drunken Taco Bell run at 1:30 in the morning, it made sense at the time.