We wanted to observe the raw statistics between the Clemson Tigers and the South Florida Bulls to give everyone a comparison of how these two teams performed over the course of the 2010 season.  The numbers show two teams that are similar in many of the overall data categories.  Data were pulled from Rivals.com and ESPN.com, so thanks to those guys for the data.  If you have to squint your eyes to read the tables, I appologize as there was a lot of data and a little space in which to show it.

Overview:   The statistics discussed later show two good defenses, two bad offenses, one decent placekicking unit, and one poor kicking team.  The stats put up by both of these defenses were good enough to expect 8-9 wins for either team.  The reason that these teams are 6-6 and 7-5 are the offensive numbers.  Both teams struggled moving the football.  Neither team threw the ball terribly well, per the numbers.  South Florida had much more success with its place kicking than Clemson, particularly with its best kicker, Maikon Bonani.  The data show that Clemson's kicking efforts were nothing short of pathetic on the season.

We'll begin by looking at the defensive data.  As shown below in Table I, both teams, on average, give up under 20 points per game.  Clemson gave up 51 more yards through the air on the season but held opponents to two fewer yards than USF did through 12 games.  From a YPG standpoint, it does not get much closer than this.

Table II shows overall team offensive statistics.  This data, like the defensive numbers, indicates the two teams have performed similarly on the offensive side for the season.  Clemson averages 23.8 PPG, USF 23.5.  Clemson gets the edge in passing yards and USF holds a slight edge in total rushing yards for the season.  A figure that may play a critical part in Friday's game is the 3rd down conversion success rate.  Clemson averaged right at 40% on the season while USF was just under 29%.

Individual rushing numbers can be seen below.  While the total yardage comparison between the two is extremely similar, the fashion that each team collected its rushing yards is not.  Clemson gained over 1400 of its total yards and 16 of its 18 rushing TDs through two running backs, Jamie Harper and Andre Ellington.  South Florida used two running backs to gain 1251 yards and their QB, B.J. Daniels, to gain another 237 rushing yards for the Bulls.  Each of those players contributed 4 rushing touchdowns on the season.  Because of injuries to Clemson's Ellington and USF's Daniels, how each team responds without an integral portion of its offense will be a key to this football game.

The passing numbers have South Florida trailing Clemson in total yards through the air but holding an advantage over the Tigers in yards/attempt.  The two schools have nearly identical completion percentages and passer ratings.  The item of interest is the TD/INT ratio.  USF's top two passers maintain a 3:4 and 2:3 individual ratio.  Clemson's main two passers individually rocked a 6:5 and 1:1 ratio.  Needless to say (as shown below), neither of these teams has been overly successful throwing the ball this season. 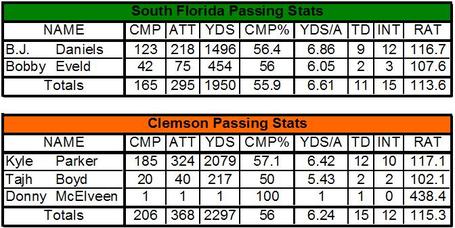 The receiving tables below indicate South Florida utilized two main receivers on the season while Clemson spread the ball out to more receivers.  Dontavia Bogan led the Bulls with 45 catches for over 650 yards and 5 TDs.  Clemson's DeAndre Hopkins had 43 grabs for over 500 yards and 4 scores.  Clemson's Jaron Brown, Dwayne Allen, and Jamie Harper each had over 300 receiving yards on the season and combined for 7 TD grabs for the Tigers.  Evan Landi was the only receiver other than Bogan to account for over 130 yards for the Bulls on the season.

USF had a decent year placekicking.  Maikon Bonani converted 16/19 on the year with his only misses coming over 40 yards out.  Eric Schwartz was not as successful for the Bulls, converting only 20% of his attempts.  Clemson struggled in the field goal category.  Catanzaro was 12/19 on the year and Richard Jackson was unable to convert either of his attempts in 2010.