We are moving forward to better and more deeply analyze recruiting data from the Clemson Tigers and the South Florida Bulls.  STS earlier this week reviewed recruiting classes for each school over the past five classes.  This data, however, does not often reflect the talent that is actually on the field on each given week.  To answer these concerns, we have acquired the two-deep roster for both Clemson and USF.  We then married up two-deep roster players with recruiting data.  All recruiting data were gathered from Rivals.com and Scout.com player rankings.

Please keep in mind that, as shown in Tables II through IV, only players who were officially signed were given a "Star Rating".  Players who were not signed could not be quantitatively assessed a recruiting rating.  Such players get a "NA" rating and were not included in the averaged data.  Players whose Scout/Rivals data was not available but were signed were assigned a "NR".

The data clearly indicate that Clemson has a decided average star rating per player advantage on both the offensive and defensive sides of the ball.  The Tigers are, on average, a full point higher than the Bulls on offense and are 0.60 higher than USF on defense.  Special Teams specialists were a lot closer, with Clemson an overall average of 0.3 higher yet dead even in the Scout rankings. 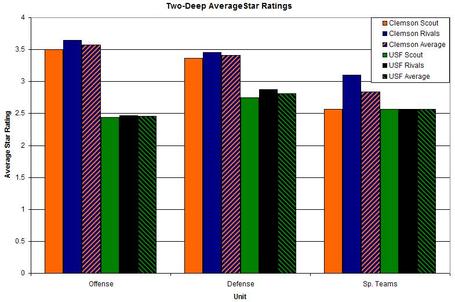 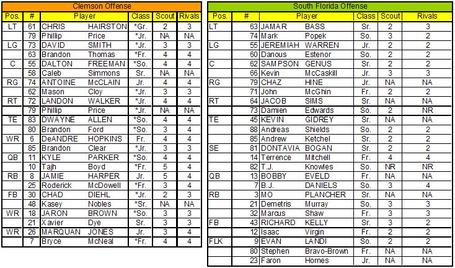 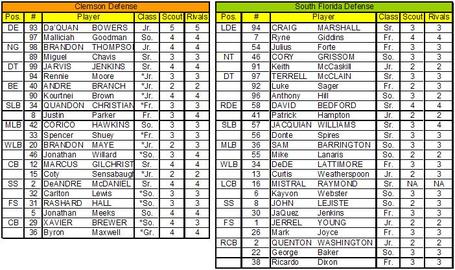