Here is an overview of the game this weekend (thanks www.espn.com) 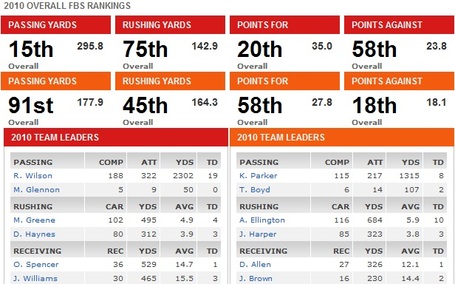 We all remember Tom O'Brien from his days as the top man at BC.  O'Brien was able to lift the Eagles from Big East mediocrity to a viable contender year in and year out.  Tom was a defensive end at Navy in the late '60's and became a Major with the Marine Corps, and that is how his teams typically play.  I have the utmost respect for Coach O'Brien, 1) He served our country, 2) He is a very good football coach, 3) He has taken the discipline he gained from the military and instills those attributes in his football teams. The Major has proven over time that he can take a group of guys who were not necessarily the most highly ranked athletes and can mold them into a good football team.  He believes in fundamentals and wins because of his beliefs.  I am not making excuses for him (he would not accept them in any fashion) but his tenure at NC State before the '10 campaign was troubled by injuries that have reflected in his record to date at the school. Long and short, you should respect O'Brien because of his character (he takes no crap and will not hesitate to get rid of a player if he doesn't live up to his expectations) and demands that his guys do all the little things correctly ALL THE TIME.  He demands discipline and we appreciate this attribute and genuinely respect Coach O'Brien.

NC State Offensive Coordinator Dana Bible is one of college football's best stories this season.  Coach Bible, who is experienced in the game at all levels (including a stint as the Phil. Eagles' OC) and has done a fantastic job with this offense this season.  NC State is a pass first offense and Bible has done a great job (obviously utilizing Russell Wilson) to pepper a variety of receivers over the course of the season.  NC State's rushing offense has been adequate, but look for this group to try to pull in most of their yards through the air.

In one of the best stories of the past year in college football, Coach Bible was able to defeat leukemia in the offseason and has not missed a beat since completing cancer treatment for the disease that was diagnosed almost a year ago.  Congratulations to Dana as your story is an inspiration to many people world-wide.

Expect Clemson to be in mostly nickel sets this weekend, and more zone than man. NCSU does have a prostyle system, but they prefer to run 10/11 personnel groups quite often. They have an exceptional TE in George Bryan, who we do not think our LBs will be able to consistently cover. We'll need to bracket him with a safety like the opponents this season have done with Dwayne Allen.

Last year the biggest impression we took from NC State's offense was that they did not run the ball enough with Wilson. CU had issues with the zone read all year, and they got yards when they tried it, but did not stick to it. Other than big plays and huge mental mistakes on defense, we handled the injury laden pitwolfies last year.

Mike Archer is the DC at NC State.  You will probably recognize his name as he was the head coach at LSU in the late '80's, following Bill Arnsparger's rebuild of the program, and taking a share of the SEC championship in '88.  Archer has a nice resume, coaching at Virginia, Kentucky, and with the Pittsburgh Steelers before coming to NC State.  Archer is a distinctly defensive guy and has coached on that side of the ball exclusively since leaving Louisiana State.  NC State also has another household name on its defensive staff in Jon Tenuta.  Tenuta, former GT and Notre Dame defensive coordinator/assistant coach, joined the NC State staff this past offseason and currently coaches the Pack's linebackers.

Archer's philosophy is similar to John Chavis or Vic Koenning, in that he plays a 4-2-5 with 4-3 personnel and he likes to play C3 zone, the same zone that BC ran all day. Tenuta sucks as a DC, but as a LB coach he excels...similar to Reggie Herring. He has whipped their group into shape, and his influence on the scheme is showcased in their higher number of Fire Zone blitzes with the LBs than in the past.

Talentwise, NCSU is not great on the front line and the secondary, but their LBs can make up for some of those deficiencies against both the run and pass in this type of coverage scheme.

Overall, Clemson will absolutely have to run the football this week to win and cannot deviate too far from the running game. While the Tigers will not have Andre Ellington on the field, and probably not for the rest of the year, we should be prepared to run this week with Jamie Harper and Roderick McDowell. We have chronicled Harper's shortcomings this season but has done a better job the past few weeks of running harder. The guy who I will be looking at will be Hot Rod. McDowell has had a few injuries to date but showed great promise in his limited playing time earlier in the year as well as in the preseason. Hot Rod is a smaller back who ran hard the few times I have seen him in the past and I want to see exactly how deep this team is at the RB position and should get to witness a good dose of Rod as Harper's backup. We do not expect the redshirts to be pulled off Buice or Howard.

The big item that most Clemson fans will be watching is the NC State offense and dual sport star Russell Wilson. Wilson has shown that he is an excellent athlete and a good leader to date. Wilson has largely relied on his arm this season especially after suffering injuries in past seasons when he spent many plays trying to make things happen with his feet. Wilson has spread the ball around this season and has established himself as a threat with the forward pass.

Despite his ‘10 dedication to moving this offense with his arm, the Clemson defense cannot fall asleep and let Russell lose containment. As Florida State learned last week, Wilson can and will beat you running the ball if you let him. Wilson torched the FSU defense last week in critical situations by scampering for critical first downs and three TD's on the ground.

While NC State will rely heavily on Wilson, they will be able to get yards on the ground running Mustafa Greene. While Greene has only 102 carries on the year, he is averaging 4.5 ypc. Clearly the Clemson defense has its work cut out for itself against a very capable Wolfpack offense. Perhaps had Clemson offered Greene instead of Buice, we'd have a 3rd back right now, but neither in-state school showed much interest in Greene.

Clemson will face a big challenge in the Valley Saturday.  NC State sits in the catbird seat in the Atlantic Division and can attain their first trip to the ACCCG by winning out.  We have noted the coaches comments all week and know that they will need to get it together, particularly on the offensive side of the football, if we are to pull out another win in Tigertown.

On a side note, Clemson will be attempting to extend its 6 game winning streak in one of the Crew's favorite series, the Textile Bowl.

From this week's Presser:

Steele: "This week we've got a big challenge. These guys are averaging 438 yards per game, right at 35 points per game. They're very-well coached. They spread it around a lot. The tight end is a special player. He's a very good player and he is a very effective pass-runner as well as blocker. Running backs have done it by committee. No. 33 comes in, a young guy from Columbia. Runs like an all conference player. But it all starts and ends with the quarterback. He's probably playing his position as good as anybody in the league now. Very effective and can beat you with his legs. They're not a Q-power, Q-iso, power-running team with him. He does run the zone read some but not a lot. I'm sure we'll see it. But the big thing is his ability to evade the rush and pick up big yards on scrambles. He makes people pay in a major way. He had two red zone touchdowns last week right up the gut. He can run and is a very accurate passer. We have our hands full to say the least."

Is a big difference with them this year their offensive line and how that's come together?
"I've only been around it since coach O'Brien has been there since from last year. I know their offensive line is playing very well. Seems like for the most part they're keeping the same guys in there. But make no mistake about it, when you have a trigger man who makes things happen like that, everybody else around him gets better. That's not to take anything away from their line. The o-line and Barry Sanders was better than they were when it was them and his backup."