Phil Steele's Analysis of the past 13 meetings 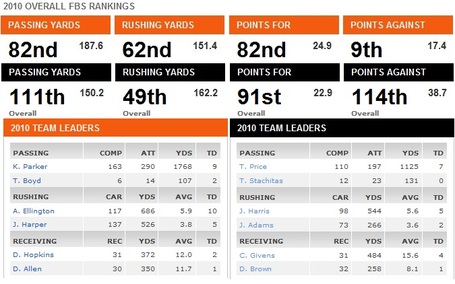 Jim Grobe is a former Virginia football player, graduating from UVA in '74. He began his coaching career as a graduate assistant in Charlottesville. He moved around for a couple of years coaching linebackers at Marshall then at Air Force. Grobe stayed at Air Force for 11 seasons before landing a head coaching job at Ohio University. JG was the head man at Ohio from ‘95 to ‘00 when he left to take the Wake Forest job. Grobe built the Demon Deacons in a methodical fashion, eventually reaching the apex of his career to date in 2006. The ‘06 season saw Wake win 11 contests, an ACC crown, and the Deacons play in the Orange Bowl to culminate this season. This achievement should not be discounted as the growth of this program was incredible considering the state of WF's program when Grobe took over.

Grobe's mid-‘00's teams were noted for their ability to play good fundamentally on both sides of the football. Specifically, Grobe's teams were known for misdirection offenses and their athletic and well coached offensive lines. These offensive lines troubled the Tigers as Clemson struggled to tame pulling linemen and an unconventional and unique blocking scheme.

Steed Lobotzke was a player and grad assistant at the Air Force then joined Grobe' staff at Ohio in ‘97 after fulfilling a tour of duty in the military. Lobotzke followed JG to Wake, eventually becoming Wake's offensive coordinator in 2003 when Troy Calhoun left for the Denver Broncos. Clearly Lobotzke was around and was a critical part of the development and implementation of Wake's ACC Championship winning offense.

In this season, due to a lack of speed and experience at many positions, WF has reverted back to the style that gave Clemson fits in the mid-00s with misdirection and option.

Defensive Coordinator Brad Lambert is a Kansas State graduate who spent time as a UGA assistant before coming to wake in ‘01. Lambert was promoted to defensive coordinator in 2008. Lambert originally coached the linebackers but moved to become the defensive back's position coach after becoming the DC in Winston-Salem. Defensively, the Deacons feature a 4-3 base attack but since their bye week have thrown in a substantial amount of 3-4 fronts.

For whatever reason though, Wake's defense has quit on themselves in our opinion.

Looking solely at past statistics and recruiting numbers, Clemson should have a distinct advantage. NCAA Football Picks shows as much. Wake Forest has given up a ton of points this year and, conversely, has been largely ineffective on the offensive side of the football all season.  Wake will feature a couple of youngsters on offense.  The Deacons are young at the offensive skill positions.  WF's quarterback (Tanner Price) and leading rusher (Josh Harris) are both Freshmen and their leading receiver (Chris Givens) is a Sophomore.

"As far as this week, it's a typical Wake Forest team. Extremely well-coached. Not always the biggest players or most heavily recruited, but they play hard and have a very good scheme. You watch the tape and you see that they have 240+ rushing yards against Virginia Tech and that right there in itself is enough to get your attention. They're very well-coached. It's a magic puzzle because they came out against Maryland and were in four WRs the whole game ... 38 snaps. They came out against NCSU and they were in 29 snaps of two TEs/one WR. Then they come out against us last year and they were two backs and one TE basically 40-something times. It's where do you throw at the dart board? There's a lot to prepare for. But at the end of the day it still comes down to alignment, assignment, technique, eyes and effort. We've been getting that. We have to keep ratcheting it up. We had a good practice yesterday."

Not sure how this squeezed in, but it's here so it's here: