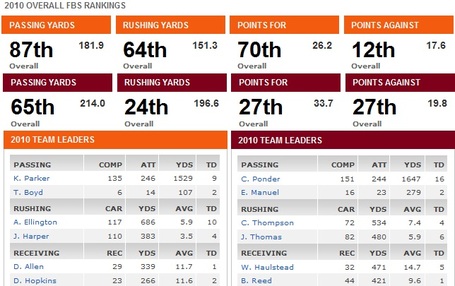 FSU Head Coach Jimbo Fisher has been around the college football game for many years. Coach Fisher played quarterback at under Terry Bowden at Samford and was named NCAA Division III player of the year in 1987. Fisher became Samford's QB's coach in the early ‘90's then quickly moved on to reunite with T. Bowden as quarterbacks coach at Auburn during the mid ‘90's. JF spent a year at Cincinnati then was able to catch onto Nick Saban's staff at Louisiana State and was retained at LSU by Les Miles after Saban's departure for the professional ranks. Fisher was then united with another Bowden (Bobby) at Florida State in ‘06 and has been in Tallahassee since, first rejuvenating their offense, then being named "Coach in Waiting", and now leading the ‘Noles as the Head Coach.

Fisher's legacy as an assistant is two fold. First, he is an incredible quarterback developer, coaching and improving the likes of Josh Booty, Rohan Davey, Matt Mauck, JaMarcus Russell (who was quite good in college at least), Matt Flynn, as well as current FSU signal caller Christian Ponder. Jimbo was also able to develop into a very good offensive coordinator over his time at LSU and .really showed his talents there fixing a very bad offense at Florida State over the past four years.

Jimbo Fisher is an excellent offensive mind and has shown that his offenses can adjust not only to the team that they play but also to their own talents.  He was not scared earlier this season to up the tempo and run no-huddle at times to try and take advantage of the talent he has on offense.

Christian Ponder makes this whole thing go and is an excellent passer.  Ponder is a rhythm guy and, for the majority of his throws, will put the ball exactly where it needs to be.  However, being such a rhythm guy he needs his receivers to be in position as the play is drawn up.

Obviously Ponder has been fighting an elbow injury that has really reared its ugly head the past month or so.  If Ponder cannot go Saturday, look for backup E.J. Manuel to come in for the 'Noles.  Manuel is no stranger to the field as the Sophomore played a lot after Ponder's injury last season.  Manuel is not the passer that Ponder is but can make things happen with his legs.  Look for more designed quarterback runs with him in the game as the Seminoles offensive gameplan should shift in a "more conservative direction" if Ponder is sidelined.

Dr. B saw a lot of Fisher's offense in his time at LSU and I would highly encourage you to check out his post from last season on this topic (click here).  The following is a good summary of what to expect out of him

The Fisher offensive system is a pro-style spread, in that sense its the same as Clemson's, but this is a catch-all term. It is a system that uses considerably less pre-snap motion and more personnel groupings than what Clemson does. It is more multiple in formations: I-formation, offset I, Ace, Jumbo Ace (2TE-1RB-2WR), 3/4 wide shotgun, pistol...with liberal use of the H-back or a 2nd TE. Its not a system that is designed to dink & dunk you in a West-Coast style like Miami, but attacks all levels of the defense. He always took what the defense gave: if they can run, he'll run it. They'll throw it deep, intermediate, and short. Fisher did not run quite as many screens at LSU in my recollection, but it has been developed into a heavier screen offense to keep pressure off Ponder and force the defense to make plays in space.

James Coley got his collegiate start as a graduate assistant at LSU in the early '00's, dabbled around as an offensive assistant then quality control coach with the Miami Dolphins before returning to the college ranks as Florida International's offensive coordinator. He has been with the Seminoles since '08. There is little doubt that Jimbo Fisher has his hand on the pulse of this offense at all times, as he should.

Last year Clemson showed FSU matchup Nickel 2 Zone all night, and they took the quick hitch passes the entire game. Eventually they did turn it over and we blew the game open. Our defense will probably show them the same things, and very little man/man coverage again. FSU's backs and TEs are agile enough, and their slot WRs speedy enough, to cause serious problems with shallow crosses and flat routes against our LBs and Nickel corner. It may depend on what Jimbo gives Manuel, or whether Ponder plays, as to what he decides to go for. What is more worrisome to us is that since Clemson will be in Nickel most of the game, FSU will run against 6-in-the-box sets, and they have run the ball really well so far.

Mark Stoops is the big name on the defensive side of the ball. Mark is obviously from a football family with his brothers being the top men at other BCS schools. Mark bounced around a little bit before getting on board with his brother Mike at Arizona. Admittedly, I was surprised to see Stoops leave the desert to become Mickey Andrew's replacement at FSU but maybe he felt that he needed to get out and make his own name at another school. Maybe he thought that he needed a big challenge and he certainly got one at Florida State. Stoops instilled discipline that was lacking on the defensive side of the football at Florida State for years.

This is a different looking FSU defense than what we were all used to seeing out of Mickey Andrews and crew.  Stoops will mix everything up on defense.  He has shown over the course of his career that he is not afraid to use multiple fronts as well as a variety of coverages.  No longer is FSU's secondary a straight man group.  Stoops likes to show zone looks and make the opponents earn their way down the field.  Stoops is also a stickler for the details so we have not seen a championship defense out of the Seminoles to this point, Stoops has improved this squad and instilled a lot of discipline and fundamental improvement that was desperately needed in Tallahassee.

This post from our friends at Tomahawk Nation details everything that goes into the FSU defense, and is an extensive read. Thus far this season, it is a defense that bases out of a stacked 4-3 set, and is predominantly Cover 3-based. In that sense, its similar to Boston College's system, but these are very different defenses. FSU runs alot of Over and Undershifted fronts, but they do not do alot of blitzing like Andrews' teams did. We have seen a good bit of Man/Man coverage in blitz situations, but they prefer to play back and keep things in front of them. In the offseason DrB figured they could improve to a Top 40 defense (from one of the worst) and thats about where they are. They have talent but the LB corps needs a ton of coaching in coverage and run support. Their DL has played very well all season and they rack up the sacks to help the pass defense considerably, but the back end of the secondary also is vulnerable to seam routes. However they don't give up the big play like they did so much of last year. There is youth across the board here.

Whether Clemson's WRs can take advantage of it is a different matter entirely, and Parker has not shown great ability at reading zone coverage. NCSU did, however, play mostly zone. Parker must take the checkdown route against this defense, and if we do that we can be successful enough to win. Though we think Ellington would have a good day against FSU, we think they'll run blitz enough to keep Harper at his usual 3ypc.

From this weeks Interviews:

People talk about Florida State’s pass game but they’re a very good team running the ball. What do you see out of their run game?
Steele."It’s very effective. 5.4 yards a carry and nearly 200 yards a game. That’s impressive."

Do they pass to set up the run?
Steele."I don’t know what that means anymore. It is what it is. Everybody throws it on first, second and third. Everybody runs it on those downs too. Just when you think you’ve got it figured out, you’ll figure out you don’t. I know this, they do a very good job of calling their plays, a very good offensive line, a good group of receivers and a very talented quarterback. The running backs, obviously, they’re good players. This is a steep challenge for us, now. A steep challenge. This team has a lot of offense. A lot of offense. Lot of plays. They have something new every week."

There are reports out there that Ponder’s status for this weekend is unknown. What do you do in preparation with that and for Manuel who may play some?
Steele."First of all, he played pretty well with that the other day and he hurt it in the game. He’s had care and treatment now and he didn’t have that after the first quarter. We fully expect to see him. The backup is a talented QB and was the Gator Bowl MVP last year. When you break down the Gator Bowl game, probably 85-percent of that was their normal offense."

Are they going to be the most balanced offense you’ve faced?
Steele."Most everybody is pretty balanced. They’re very efficient and have big-play potential. They have as many long runs and long passes as anybody. They’re the most effective on third down in this conference. That’s a big, big key."

What do you think of Hudson, their top guard?
Steele."He and the center, you’re talking about starts. Very well-coached offensive line. Very athletic."

Asked about FSU's pressures this season:

Napier : "I think it’s all down-and-distance, field position-based. I think they’re a little less of a pressure team than they were last year. Mickey (Andrews) was pretty aggressive. Depending on that scenario, they’re going to bring some pressure. When that field gets condensed, in the red area and green zone, certain third downs, you’re going to get some heat. They’re trying to create a pass rush. He’s implementing his system. They’re in their first year. They get more comfortable every week. They’re young, but they’re also talented. A lot of these guys we played against last year."