Depth Charts for Both Squads

Basic information for both squads (thanks www.clemsontigers.com):

Basic stats (thanks to www.espn.com) 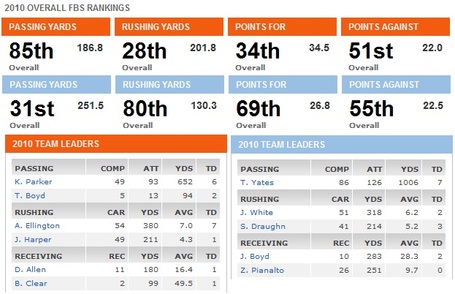 North Carolina is coached by Butch Davis, a man with an extensive resume. He is tremendously respected around the nation and especially around the Southeast. I’ll admit that I wanted Clemson to make a serious run at getting Davis to Clemson once we all realized that he had a real interest in returning to college football. There is no doubt that Davis can coach and his past glories reflect this.

A bit about Coach Davis. Davis attended the University of Arkansas where he was a defensive end who’s career was shortened because of injury. Davis gained national notoriety after he joining fellow Arkansas alum, Jimmy Johnson. Butch teamed with Johnson at Oklahoma State, then at the University of Miami, then with the Dallas Cowboys. Coach Davis followed his time as defensive coordinator for the ‘Boys by taking the head coaching job at the "U" in 1995. BD took over a program in complete turmoil and turned Miami into a powerhouse in five years before leaving to coach the Cleveland Browns in 2001. Davis put in all the work necessary to set Miami up for its championship run in 2001, essentially "giving Larry Coker the keys to the Porche" in the same fashion his mentor gravy trained Dennis Erickson into half a decade of success nearly ten years earlier.

Clemson's trip to North Carolina will likely be the Tigers' lone contest this season that focuses on so many things that are happening off the field.  It is no secret that the North Carolina football team has had many, many off the field distractions this season based on allegations of inappropriate contact between players and agents.

Out (IR / Out / Suspended / Physically unvailable)

North Carolina's lineup shuffling will continue against Clemson this week.  The Tarheels appeared to catch a break with the return of Senior Deunta Williams at the safety position.  Williams, who was sidelined by the NCAA for the first four contests to start the year for receiving "preferential treatment", will team up with Da'Norris Searcy to restore the starting group of UNC safeties (pre NCAA investigation, of course).  Searcy regained his playing eligibility last week.

As UNC gets Williams back they lose fellow Senior Greg Elleby to a season-ending injury.  Elleby (whose injury was not shown above) tore both his ACL and MCL in last week's contest against the East Carolina Pirates.  Elleby started his career on the defensive line, playing end in 2007 and 2008.  Last season he was moved to the offensive line then moved back to the defensive side of the football after the LSU game.

The UNC faithful will be watching the health of Quan Sturdivant this week.  The senior linebacker was held out of last week's contest and is still recovering from a thigh injury.

North Carolina will, like Miami last week, utilize the old Jimmy Johnson 4-3 scheme.  If you haven't done it already, do yourself a favor and read up on the 4-3 Over that both UNC and Miami, FL utilize.  UNC and Miami are similar defensively in many ways.  Like Miami last week, don't expect the 'Heels to be too aggressive defensively.  They will attempt to put pressure on the Tiger's quarterback via their front four.  You will also see a good bit of zone coverage this weekend.

Offensively, UNC is led by offensive coordinator John Shoop.  Shoop played football at Sewanee and built a pretty substantial resume as a coach in the NFL.  Shoop spent 12 years in the pro game and served as the offensive coordinator for both the Chicago Bears (2000-2003) and the Oakland Raiders (2005-2006).  While his teams' offensive performances may not have been too impressive with the Bears and Raiders, the experience surely is.  Shoop is a guy who demands execution and can be conservative with his playcalling (if you have not seen much of him at UNC, just think back to the early '00's Bears teams).

I highly recomend reading our Q&A session with www.IntheBleachers.net for an insightful view on the Tarheels.

They've lost a couple good players, but they're replacing them with good players. They've recruited extremely well. Their linebackers are NFL guys, a couple first-rounders there in that linebacker core. All of them are going to be drafted. Two safeties are no doubt NFL guys. No. 90 is as good a football player as we've seen all year. I mean, he's a first-round draft pick if I've ever seen one in the defensive line. No. 95 is a young guy, a guy we recruited, thought highly of him. Same thing with ZNo. 98, another guy we recruited. All those guys are NFL-type players. Again, they lost a couple of very experienced guys and replaced them with talent. But now these guys have played four games, gotten better, and played against competition. You're not in the game with LSU and Georgia Tech if you don't have good players. These guys had a chance to win both of those games. I know they're getting another safety back this week. We feel like they're as good as anybody we've played. Offensively, No. 34 I think is as good a back as we've played all year. I don't think there's anybody out there that is more impressive than this guy. He runs extremely hard, finishes plays. 20 is a good back, too. They're skilled. Numbers 83 and 88, 87, those guys could play for anybody in the country. They’ve got a veteran offensive line. The quarterback is playing outstanding. He's got one pick, thrown for over a thousand yards, and is making good decisions. This is a very talented football team. Again, everybody wants to talk about a couple guys they don't have. We're more interested in what they do have, and they've got more than most.

More on the UNC defense:

Defensively, they're big across the front. Quinton Coples makes a lot of plays for them. All those linebackers are NFL-caliber guys and they like to keep them in the game as much as they can. They have plenty of talent on the defense. We have to run the ball effectively. We have to throw and catch better, but the main thing is we have to have ball security.

Swinney on the receivers:

The four guys you'll see are Nuke Hopkins, Bryce McNeal, Jaron Brown, and Marquan Jones. Those are the core guys right now. The other guys will play some, but the majority will go to those four guys. We've hoped that the receiving core would play out by now. Guys earn opportunities. Even where we are right now, nothing's final. Guys have to go play. We have to create opportunities for certain guys based on what we've seen, but guys have to play well.