This week we will get an idea of the talent on both Clemson's and North Carolina's squads based solely on data pulled from Rivals and Scout.

Below, we show in Figure 1 the average annual star rankings for both squads.  Both teams give you an average ranking that is over 3 stars.  Clemson's average player star rating over the past five years is significantly better than UNC's.  This difference, however, is largely due to a poor 2006 recruiting class by the Tarheels.

Clemson's numbers (again) are a little skewed by the 2009 class that was extremely small but contained some extremely talented players.  Ignoring the '06 data, it is apparent that both teams have recruited above average talent and that North Carolina's player quality has dramatically improved under Butch Davis' watch.

What does this tell us?   Like Auburn and Miami, the average player recruited by either school has above average talent, especially if you ignore UNC's 2006 numbers.  Thus, the average core player (everyone other than 5th year seniors) for each team is an above-average player, per these numbers.  (more after the jump) 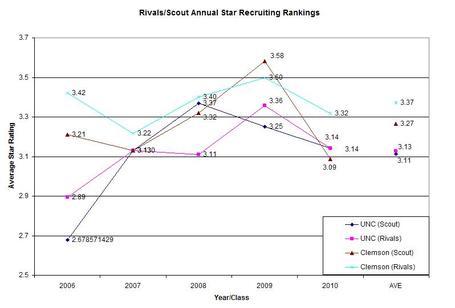 Figure 2, shown below, examines the class sizes of the past five recruiting classes for each school.  These numbers differ a little (at least from my perception) from the past couple weeks' opponents.  Clemson actually signed more players than an opponent in several classes.  The '08 and '10 classes for the Tigers were larger than UNC's.  While the '10 class may not make as big of a difference in this week's football game (we have not really seen a true frosh getting after it this season), the RS Soph and Juniors will see lots of action this weekend.

These data indicate that both teams will be playing with above average talent.  With the delta in recruiting class sizes seemingly decreasing from past weeks, quality depth may not be as big an issue between these teams as in the past few weeks. 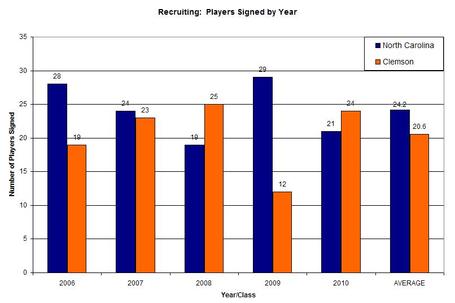 The overall recruiting rankings give Clemson a lead in the average class ranking over the past 5 years.  Clemson did have the outlier year (2009) which hurt the Tigers when compared to the 'Heels.  UNC pulled in two really nice classes over this time period, 2007 and 2009.  The data are interesting as Clemson and UNC seemed to alternated on who had the better class year after year.  The two teams look pretty even based on these three figures.  I was a little surprised about the 25-30 ranking of UNC based on the information from Figure 1.  After doing a little more research, it became apparent that UNC some quality athletes (per Scout, four 4-star players and a few 3 stars) but filled other available scholarship positions with 2-star recruits.  Hence, the average star rating was a little low but the class ranking reflected the talented players recruited. 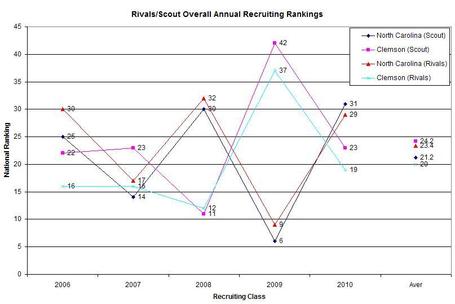 What do these numbers really mean?  Both teams have recruited above average talent.  On average North Carolina brought in about four more players per year than Clemson but this is largely skewed by the numbers from Swinney's first class.  The average class ranking indicates that, overall, these two squads should be pretty close from a pure talent and recruiting standpoint.