Share All sharing options for: "All In" to "All Done" 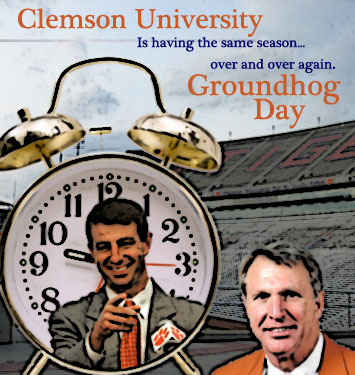 This post sponsored by Sleepy Don and the Clemson Athletic Department
If we had won, there would be two ways to look at that game. The optimists would say we fought hard and overcame adversity to win a game where we clearly got outplayed and outphysicaled. The pessimists would say that we still don't use the talent on the team, that Kyle Parker played awful, and that Dabo Swinney is clearly in over his head.

But unfortunately for the optimists, the Tigers lost. The pessimists are right about this game. Now the axe should start swinging. I know it won't midseason, but it should. 4 losses at this point in the season is unacceptable, especially with one coming to a team as bad on offense as Boston College. When Dabo was hired, I said I'd give him 3 full seasons, but if this team loses two more games then he doesnt even deserve that. 7-5 with this team, with Parker returning, is unacceptable. 8-4/7-5 is what I expected with Tajh taking snaps.

You the fans must let the Administration know this, and if you want people gone, then you should keep in mind that the axe needs to start swinging at the top, in Sikes Hall, before it makes it over to McFadden and the WEZ.

The only really good thing I can take away from this game is that the defensive staff can make an adjustment, but I already knew that much. Steele has always made (other than the ACCCG) good halftime adjustments, so I was confident that BC wouldn't continue to pound us up front. We didn't miss tackles and we played gap sound defense and good coverage, which you'd get from an experienced defensive staff.

But the Head Coach is responsible for the whole team coming out flat. You cannot argue this point with me.

Whether or how much Dabo interjects in offensive playcalling is debateable, but we think he is behind the rise of the shotgun/4-wide spread offense we're trying to run, which is against our current strength. We do have talent at WR, and they do need reps, but you have to play to your strength and what you're best at. When you deviate from it too far, good teams will make you look stupid. You can always work on the passing game within the system while staying true to your strengths, but getting away from establishing your identity wherein your strengths lie leaves you with no identity on offense whatsoever.

BC has a good defense. They have always played very sound, but rarely flashy against us. They stick in their gaps and make tackles, and they play very good zone. They did so today. What Clemson did not do, which we alluded to in the game preview, was just take what they give you with that coverage. Kyle Parker played bad, and I would've pulled him at one point in this game to shake him up. I would've put him back out there for the simple fact that he still gives the team the best chance to win now. After looking over his whole performance, he did not give them a great shot today.

Kyle Parker had happy feet today, and all season to be honest. He does not stand in the pocket and deliver. He feels rush where there is none, and then doesn't plant his feet to throw. That makes him throw weaker balls at times. He also rolls out to his right, and the best we usually get on that dumb waggle pass is a 4 yard pass to the TE. The 2nd and 3rd routes behind him are always covered or Parker just waits too long to deliver and they end up at the boundary and covered. He still throws across his body, back over the middle, which I'd expected him to quit doing with another year of coaching. Also, and this was most disappointing, he doesn't read all his receivers. He locks on one side, and doesnt look backside. He thinks he's going to get one guy open, and doesnt see that the D gives him something that will just move the sticks underneath that. Today he even forced some that should've been thrown out of bounds.

For those who don't know defensive X's and O's, there is one thing you have to understand: when you will just take what the defense gives you, they will eventually give you the game. Every defense makes a tradeoff, deep for short, field for boundary, inside vs outside runs, etc. You may have to out-athlete them to take advantage of it but they give you something. Most defenses use disguise to hide their tradeoff, and some like Saban do it so well that you don't see what they are giving you. BC gives you short checks over the middle with the backs, and they give you underneath routes. They go in with the idea that you won't beat them deep, so they give you short. The checkdowns for Parker were open, and he didn't have them every play (bad design), but he didn't take them when they were. He didn't read their zone coverage any better than last season against them. Thats a lack of coaching.

Then the running game, which we didn't try much of in the 1st half in part due to limited success, and didn't stick with in the 2nd. When Ellington went out I knew we'd go pass mode, but we didn't run the ball when he was in there. We still don't feed the ball to the best player, which has been the story of the last decade or so.

Special teams was bad, and now I'd have to let Richard Jackson have it. We missed two FGs and lost 16-10. Bad offense or not, you have to hit the FGs under 40. Catanzaro is just missing too many easy ones.