With the exception of last season's football game, games in this series have been pretty close since BC joined the conference.  Boston College simply whipped Clemson up front in the first couple of games the teams played as ACC foes.  I can remember watching a few of these contests (the 2005 game really sticks out) where you just knew that Boston College was going to find a way to be a tougher team than our Tigers and win in the end.  Clemson has committed its fair share of blunders against the Eagles over the years including missing key extra points and dropping game winning passes.

Here are the results for the games between these two schools since 2005:

2009:  BC-7 @ Clemson-25 - One of the most dominant defensive performances in Clemson history.

Frank Spaziani is in his second full season as head man at Boston College. Spaz, if you will recall, took over after Jeff Jagodzinski was given the boot for chatting with the New York Jets about their then-vacant head coaching position without permission (actually defying) from BC's athletic director and effectively turning the Boston College head football coaching position into a revolving door (if you remember, Tom O'Brien left BC prior to the '07 season).  After Jagz left, Coach Spaziani was promoted from the defensive coordinator position to become the head coach in time for BC's 2009 season.  It is also of note that Spaz led BC to its 2006 bowl victory over Navy (following O'Brien's departure) before being passed over for JZ as the Eagles' head coach.

As mentioned, Spaz is a defensive guy. After an early/mid-career stint at Navy, Spaz got his recognition as defensive coordinator at the University of Virginia in the early '90's.  He then moved to the Canadian Football League from '92 to '96 before signing on with Boston College in time for the '97 season. FS became defensive coordinator in '99 and held that position until he was elevated to the top job in '08.

Spaziani was the root for the good defensive efforts that we saw out of BC during the Eagles' Atlantic title runs over the past half-decade or so.  His defenses have traditionally been fundamentally sound AND physical.  Spaziani was also referred to as the "Mad Scientist" (not to be confused with village idiot former Clemson offensive coordinator Rob "Mad Scientist" Spence) and had a reputation as coordinator for trying many, many things.  I would encourage you to read Dr. B's piece regarding his 3-5-3 concept to see how innovative this guy can get on the defensive side of the ball.

Bill McGovern, BC's current defensive coordinator, has been at the New England school for quite some time.  McGovern has been at BC for over a decade, serving as the Eagles' linebackers coach before being promoted to his current role.  McGovern has been credited with molding quite a few players into stud linebackers including 2008 ACC defensive player of the year Mark Herzlich and last year's Freshman of the Year Luke Kuechly.  With McGovern and FS working together for so many years, expect Boston College to continue to show a multitude of defensive alignments based on situations.  Also expect this group to put an extra body or two in the box and/or run blitz to make the Tigers try to throw the ball this week.

As far as scheme, its a 4-3 and its actually quite simple, which is why they always execute it well. They do not change up the front too much. It is Slide and Undershifted for the most part. They do stunt, and they run blitz quite often, but pass blitzes have been few and far between over the years. Usually Spaziani drops back 8 men in coverage and would rather make you execute than risk a big play. Its somewhat similar in philosophy to Koenning coveragewise in that its almost entirely a spot-drop Cover 3 with strong/weak rotations. The blitzes they do throw at you are usually Fire Zones. Their pass rush has been almost non-existent from the down 4, and the extra time this has allowed opposing QBs is displayed in their poor pass defensive statistics.

What BC does best, and this is why they are always stout against the run, is gap control. We preach it here, but BC does it quite well every year, and it makes up for the lack of talent they sometimes have up front. Their line tends to slant quite a bit, and they put those big guys right into gaps and make you move them. That keeps the OL occupied so the LBs can make plays and get the headlines.

Expect Clemson to try more inside zones and stretch plays against this type of front. Gap scheme plays tend to be taken away by a front like this. Parker did not have the greatest day against their zone defense last year, but we do have a talent advantage in the air. We should be able to pick this defense apart some and use that to set up the running game.

Offensive Coordinator Gary Tranquill is no stranger to the game of football.  The '62 Wittenberg graduate has been all over the place, including a stint as Navy's head man, Virginia's offensive coordinator in under Welsh in the late '80's/early '90's, the Cleveland Browns' quarterbacks coach, a couple more college jobs, UNC's OC (2001-2004), and a slot in NFL Europe.  Tranquill joined this staff prior to the '09 season after a four year hiatus from the game.  Under his watch, the Eagles have not been successful on offense and have struggled to find any sort of rhythm to date.

One issue that BC has had is inconsistency at QB.  BC has given three quarterbacks (Chase Rettig, Dave Shinskie, Mike Marscovetra) substantial playing time and seem to have settled on the true freshman Rettig as the signal caller.  We expect to see Rettig exclusively this week and also expect to see some growing pains as this young man gets more PT at the college level.

Expect BC to shift their formation all day long. Its multiple to the extreme and they do it to get better pre-snap reads on coverage and set up favorable matchups, for example. Unfortunately it seems this may be a factor in their inconsistency on offense. They are not well-coached on film, but they don't have a passing threat either, and nobody can win by being totally one-dimensional. If you think our WRs are bad, you may be surprised this weekend.

We think you see Montel Harris run the ball all day, if it works against our defense. He's good, and though the OL is inconsistent, they are big and strong up front. Its rare to see a team with this much beef up front struggle so much, and they couldn't handle our DL last year at all.

Clemson will probably play it pretty basic against a team that shifts so much. It'll be Under front with man/man coverage, 2 man and Robber. These receivers do not instill any fear on tape. If they do end up having any success, we think Steele dials up the blitz on the freshman. 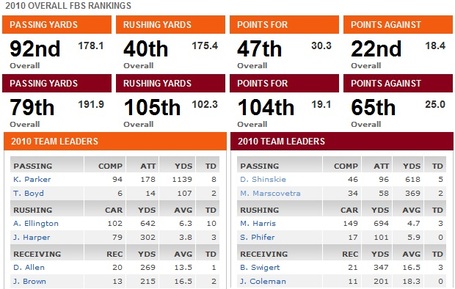 Boston College's record is less than impressive to this point.  The Eagles have, however, shown signs of improvement over the past two weeks in two close losses to ACC Atlantic division competition.  BC led FSU at several points in their game and had a chance to pull one out against a team that many think is the class of the ACC.  Last week BC got into an early hole before putting up two touchdowns in the fourth to fall just short against Maryland.

The long and short of this story is that this game is on the road and BC has shown signs of life in their recent losses.  The BC defense is good, especially against the run.  If Clemson comes out with no emotion they could be in for a rude awakening as BC's defense can keep this one close. See the college football odds for the current lines.

On the flip side of this coin, Boston College's offensive line has not been overly impressive.  Clemson's defensive line--and Bowers in particular--is good enough to have a big day if they come ready to play.  This is an important contest for the Tigers as a dominant effort could be a springboard for the balance of the season but a poor performance could easily deflate this squad and the fanbase.