This week we will get an idea of the talent on both Clemson's and Boston College's squads based solely on data pulled from Rivals and Scout from 2006 - 2010 recruiting classes.  Clemson's average star rating was consistently much better than its opponent the past few weeks and it appears as though this trend continues again as we prepare for the BC Eagles.

Clemson has, over the past 5 years, brought in more talent on an average star rating each year than Boston College.  This means that if the experts are correct pegging talent coming out of high school, the Tigers should be much more talented when you compare starters.  This also means that if depth is not a factor, Clemson should be able to win one on one matchups based on average talent per player alone.  The item that disturbs me here with this data--and I have seen this a couple of times before--is the difference between the Rivals and Scout rankings, particularly with the 2006 numbers.  I went back and double checked the BC numbers and the two services had full point differences on many of the players BC recruited which drove the Scout rankings down when compared to the Rivals numbers.  As this process is an opinionated process, this stuff happens each year.  (more after the jump) 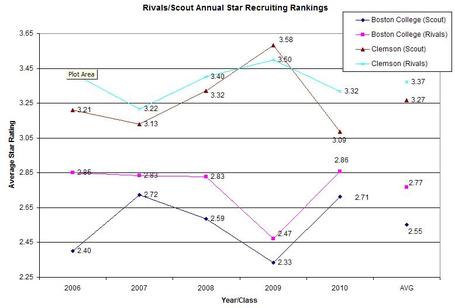 Figure 2, shown below, examines the class sizes of the past five recruiting classes for each school.  The average class size between the two schools were very close in sizes, with BC holding a slight advantage from a numbers stand point.  BC had a big class in '08 and Clemson had an extremely small class in '09.

This comparison shows that quality depth should not be an issue for the Tigers as we prepare for the Eagles.  We have brought in/signed (from a numbers standpoint) comparable quantities of players when compared to our friends from New England. 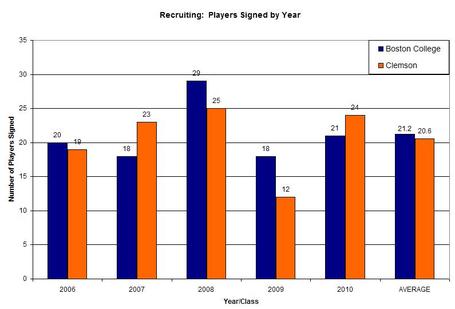 The overall recruiting rankings show Clemson having a huge lead in the average class ranking over the past 5 years.  Clemson has been dominant when you look at the overall national recruiting rankings year after year.  BC has a pretty good year in 2008 but has lagged behind Clemson in terms of bringing in highly ranked recruiting classes.  Clemson should have a big advantage from an overall team talent standpoint come Saturday. 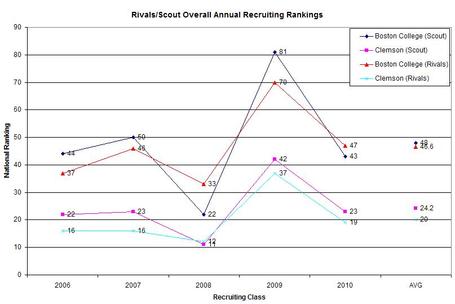 Clemson has done a superior job--according to the "experts"--recruiting over the course of the past half decade.  The data in Figure 3 shows a combination of the two items we saw above:  Clemson has consistently done a better job on the recruiting trail than BC over the past decade.  With this apparent talent gap and comparable depth, I have to give Clemson a definite edge based solely on this data and nothing else.