This week we will get an idea of the talent on both Clemson's and Maryland's squads based solely on data pulled from Rivals and Scout from 2006 to 2010 recruiting classes.  Clemson's average star rating was consistently much better than UMd.  These numbers show that Clemson, over the past 5 years, has been able to reel in better quality talent than Maryland.

This is the first week since PC and North Texas that Clemson's average (recruited) player's rating is far superior to their opponent's.  This also means that if depth is not a factor, Clemson should be able to win one on one matchups based on average talent per player alone.  (more after the jump) 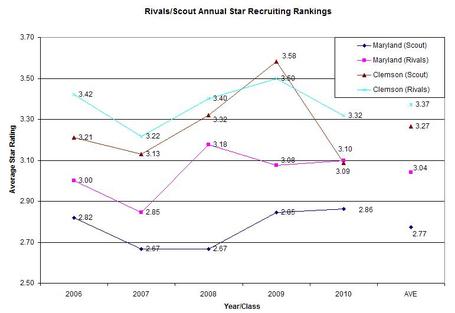 Figure 2, shown below, examines the class sizes of the past five recruiting classes for each school.  Clemson and Maryland went back and forth over the past decade when you compare who signed more players every year.  Maryland was able to bring in slightly larger classes and, when you remove each team's smallest signing class (numbers wise), UMd still signed on average more than one player per year than the Tigers.

The data comparison here shows less of a difference between Clemson and its opponent this week.  Maryland does have a slight advantage in the numbers game, especially over the past four classes but the weather should be nice in Clemson this weekend and I do not expect depth to be as big of an issue this week as we thought it could have been the past few weeks. 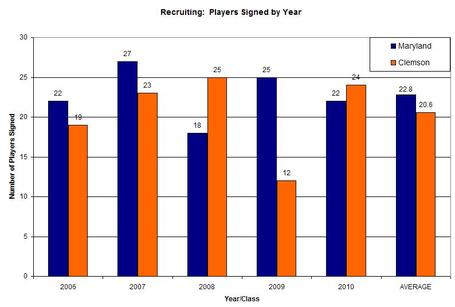 The overall recruiting rankings show Clemson having a huge lead in the average class ranking over the past 5 years.  Clemson did have the outlier year (2009) which hurt the Tigers when compared to the Maryland's top 30 class.  Maryland had two pretty decent classes over this time period, one mentioned earlier in '09 and one in '06. 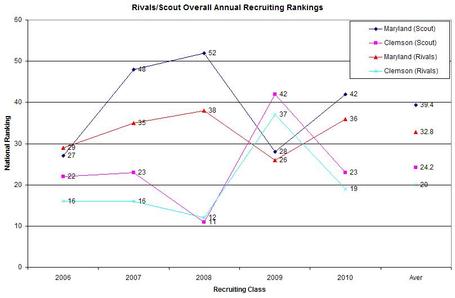 Clemson has done a superior job--according to the "experts"--recruiting over the course of the past half decade.  The below data shows a combination of the two items we saw above:  Clemson and Maryland had comparable class sizes but Clemson's average recruited talent was rated much higher than Maryland's.  Hence, the overall ratings give the Tigers a big advantage heading into the game Saturday.