Share All sharing options for: Countdown #2: Clemson at Miami 2009 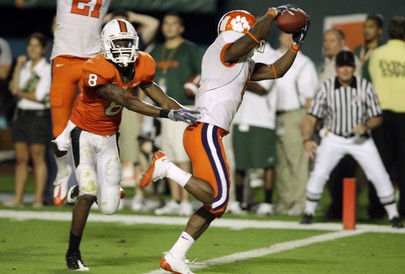 This game was easily the biggest game of the year for Dabo Swinney.  Clemson was just getting going after some struggles earlier in the season with losses to Georgia Tech, TCU, and Maryland and was 3-3 coming into this contest.  A key open date after the Maryland game allowed the coaches to regroup and simplify the Clemson offensive attack.  This strategy paid off immediately after the open week when the Tigers throttled Wake Forest in a contest that finally saw Clemson's offense come alive.  This new strategy focussed on getting CJ Spiller the ball more on the ground, Jacoby Ford more touches at the WR position, and tossing the ball to Michael Palmer in tough situations.

Miami, meanwhile, entered this contest as the #8 team in the land.  Previously in the season, Miami defeated #18 Florida State, demolished #14 Georgia Tech, lost to #11 Virginia Tech in a monsoon, and defeated #8 Oklahoma, not too shabby for the first four games of the year.  Needless to say, Miami appeared to have its swagger back and was poised to make a run towards a potential ACC championship (with an outside national championship shot).

This game started with the Tigers receiving the opening kickoff, driving to the Miami 23, and Richard Jackson missing a 41 yard field goal.  This opening drive looked nice and featured a 30 yard pass to C.J. Spiller and a nice pass to Xavier Dye.  After the miss Miami and Jacory Harris drove dovn to the Clemson 20, but was intercepted by  DeAndre McDaniel deep in Clemson territory.  McDaniel was the benificiary of a tipped pass and Clemson was extremely fortunate to hold the 'Canes without a score here.

Clemson's next drive was marred with penalties.  Clemson suffered from intentional grounding, holding, and personal foul penalties.  These miscues resulted in a 5 play, -14 yard drive and a Clemson punt.  The period ended in a scoreless 0-0 tie, with both squads squandering opportunities deep within each opponent's territory.

The ensuing Hurricane drive went 33 yards and was capped by a Matt Bosher 49 yard field goal to put the "U" up 3-0 early in the second period.  Clemson was able to drive down to the Miami 26 yard line, but a rare C. J. Spiller fumble ended this Clemson possession with the Tigers in striking range.  The Clemson defense was able to force a 3-and-out possession and put together a great touchdown drive on the following possession.  Dwayne Allen and Michael Palmer both had clutch catches on this drive that ended with a juggling 15 yard reception and subsequent dive to the pylon by Palmer.

The Hurricanes immediately responded, reaching the endzone on a 10 play, 80 yard drive.  Spiller was able to counter this score with one of his own on the Miami kickoff, scampering 90 yards for the score.  By the response of the Miami coaching staff, I don't think they had planned on kicking the ball deep to Spiller for this very reason.  Rashard Hall was able to pick another Jacory Harris pass deep in Clemson's territory, and the teams went to half with the Tigers leading 14-10.

The 'Canes opened the second half with an 80 yard drive, moving right down the field for the score.  The two squads then traded 3-and-out series with the Tigers getting the ball at their own 27 yard line.  Three plays later, Kyle Parker hooked up with Spiller for a 56 yard touchdown.  On this play, Clemson successfully ran play action and had CJ run a wheel route, smoking the Miami defense.  Clemson then forced another Miami turnover on the 'Canes next posession, and had a chance to really break this one open with the fumble recovery at the Miami 26.   Unfortunately, Kyle Parker made what is questionably the worst decision he made all year.  Parker, pressured by the Miami defense, did not properly secure the ball and really tried to do too much.  The "U" then sacked Parker and forced the freshman to put the ball on the ground.  Marcus Robinson scooped up the fumble and returned it 53 yards to put Clemson behind 21-24.  A Richard Jackson 43 yard field goal left the teams tied at 24 going into the 4th quarter.

Miami opened the 4th with a 51 yard field goal and forced a punt on Clemson's next possession.  Clemson's DeAndre McDaniel was able to step in front of a Harris pass and weaved his way into the endzone for a pick-6.  Harris and the Hurricanes responded on the next play from scrimmage, scoring on a 69 yard pass reception by Travis Benjamin.

Clemson immediately moved the football to the Miami 4 yard line (drive keyed on a 48 yard carry by Spiller early in the possession).  Parker proceeded to press on a 3rd and goal from the 4 yard line, tossing a pick in the endzone.  Clemson kept its composure, forcing a 3-and-out and getting the offense the football back with a little over 3 minutes left in the game.  Clemson was able to get to the Miami 12, allowing Richard Jackson to punch a 30 yard field goal through the uprights and tie the game at 34 to end the 4th quarter.

In overtime, Clemson was able to stop Miami at the 5 yard line, forcing the "U" to settle for a Bosher 22 yard field goal.  On CU's third offensive play in the OT period, and facing a 3rd and 11 scenario, Kyle Parker found Jacoby Ford with a strike on an improv play.  Ford was able to find the end zone, and the Tigers pulled off an improbable victory in South Florida.

What makes this game so memorable for me is the amount of improvement that Clemson was able to make from week to week.  This game saw Clemson fight until the very end, overcoming adversity throughout the contest.  Clemson was able to fight back after two poor decisions by Parker to win this one.  This one is important because it gave the team the confidence it needed to run win the remainder of its regular season ACC games and earn a spot in the ACCCG.  IF Clemson and Dabo Swinney can get over the hump, and Swinney sees championship success at CU, we will probably point to the improvements and maturation from the UMd game to this one as the turning point.

We were pretty jacked up about this win here at STS.  Here is Dr. B's posgame thoughts, coaches interviews, and film review.

Dabo Swinney addresses the team after the victory: