Game Thread for Clemson at Duke

Share All sharing options for: Game Thread for Clemson at Duke 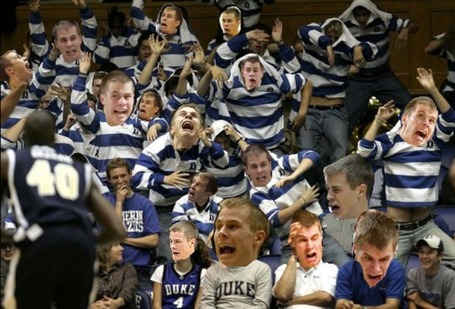 Last year, the Tigers handed Duke its worst ACC loss in 25 years: a 74-47 raping at Littlejohn Coliseum that was also the largest margin of victory by a Duke opponent since a 30-point loss to UNLV in the 1990 National Title game. However, we've lost 56 of 60 trips to Durham and most of this team has never played there.

Tanner Smith, the team’s second-leading scorer at 10.8 points per game, said he’s consulted both teammates and players from other ACC teams about the Cameron experience.

"It’s all the same stuff: it’s a crazy atmosphere where you’ve got to make sure you keep you’re head in all the situations, in the good times and the bad," Smith said. "The adrenaline is just really going to go there, so just make sure we keep our head. But you can’t simulate it in practice or even on film." (source)

Theres good and bad to this matchup. I think Scheyer and Singler are great players, and Coach K is the best coach in the country in my opinion, so Duke won't lay an egg in this game. I could see us looking like Gonzaga against them. Have the Tigers looked consistent mentally so far this season? I dont think so.

The full court press has not be as smothering so far, but the variety in defensive strategy has been encouraging and the half court trap has been effective. Jon Scheyer doesnt turn the ball over, but I think Smith and Dawkins can be forced into it. Stitt will need a great game defending Scheyer but Singler I'm afraid will score all over us. They are big inside, but I dont think theyre really any more talented in there.

Duke will drive the basket and kick out, and either they'll be shooting FTs all day or draining perimeter shots.

But honestly I dont think this Duke team is really any different from last year's team. While certainly we benefitted from having Duke in Littlejohn last year, and were not really 30 points better, we can still defeat them. If the Tigers rebound better against a tall Duke team and play perimeter defense, we can win this game.

"One of the areas that I’ve been concerned about is our blocking out and rebounding," Purnell said. "We’re going to have to block out their (bigs) in order to keep them off the offensive glass. You don’t want to give Duke easy baskets by turning the ball over at half-court — a play you can’t guard — or a lot of offensive rebounds."

And one important point, Duke doesnt have a deep bench. They will generally not play many guys after the starting 5, who will probably get 28-30 minutes each. Duke will have played their 3rd game in a week when they face Clemson. If the Tigers DRIVE the basket from the point, we can force fouls and put them in deep trouble.

Lets hope we can get a tough road ACC win, please keep all game comments below.