Share All sharing options for: Countdown #3: Clemson at Georgia Tech--2001

The Tigers went into Atlanta with a #25 ranking and coming off of a tough last second loss at home to Virginia.  Previously, Clemson struggled through relatively unimpressive games against Central Florida and Wofford.  Clemson really needed a win (and specifically an ACC win) to keep the season on track, and Georgia Tech (#11 USA Today, #9 AP) stood in the Tigers path.  This game was dramatic and featured senior Woodrow Dantzler making plays all over the field.  This one is particularly remembered because of the amazing effort put on by Dantzler put together all afternoon. 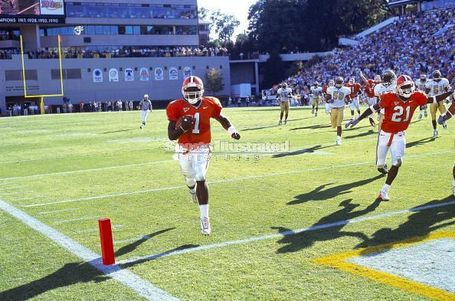 This game is well-remembered because of the effort given by Clemson's Woodrow Dantzler.  Dantzler was a tremendous athlete at Clemson, and this game highlights his elusive running skills and ability to throw the ball when necessary.

Georgia Tech came into this game featuring Joe Burns at tailback and George Godseyunder center, withthe latter being the candidate for many college football quarterback awards.  Georgia Tech came into this contest witha 3-0 record, with wins over Syracuse, Citadel, and Navy.  This was a potent offensive squad and featured one of the hottest names in college football coaching at the time, George O'Leary but many were concerned how this offense would perform without their longtime offensive coordinator (Ralph Friedgen) who left for UMd following the 2000 season.

This one started fast and the excitement never really let up.  Georgia Tech opened the scoring with a 22 yard TD.  Clemson was able to follow up the GT field goal with a T-Zach touchdown, and GT polished off the first quarter scoring with yet another field goal to trail the Tigers 7-6 after one period.

The second quarter was dominated early by the Yellowjackets.  GT bothpassed and ran for a touchdown and led 19-7 late in the first half.  With time running out, it appeared as though this would be the half time score barring some strange miracle.  With just under 15 seconds to play in the first, and the ball at the GT 38, Dantzler dropped back, and was immediately pressured by the Tech defense.  Dantzler escaped the rush and took off down field, zig-zagging through the Tech defense and scoring with no time on the clock.  I remember thinking that the half was surely over (actually screaming for Dantzler to throw the ball), but Dantzler kept running and kept running, finally getting into the endzone and taking the Tigers into half with a 19-14 deficit.

This was a precursor for the excitement that would be present in the second half (and subsequent overtime period).  The two squads combined for 58 total points in a second half effort that not many Tigers will ever forget.  Dantzler was able to connect with Matt Bailey for a 55 yard TD early in the third period which gave Clemson a brief lead to open the period.  Tech was able to counter on a 35 yard TD completion.  Clemson responded, and was able to put together a nice 13 play, 80 yard drive propelled by a Derrick Hamilton 18 yard reception to get the Tigers deep into GT territory.  This drive was capped by a Travis Zachary TD (2pt conversion failed), and the Tigers began the fourth with a one point lead.

Clemson was able to open the fourth quarter with another Tiger TD, with Zachary again capping an 18 play, 80 yard drive to put the Tigers up 34-26.  As was typical for this game, GT answered with back-to-back touchdowns and, after a failed two-point conversion following each TD, Clemson trailed 38-34 late in the contest.  Clemson looked to have lost all the momentum built earlier and had one possession left to try to catch the Jackets.  Facing a 4th and 14 scenario from its own 36 yard line, Dantzler was able to find a streaking JJ McKelvey for a late touchdown and keeping the Tigers in this game by putting them up 41-38 with around two minutes left in the game.  Unfortunately for Clemson, GT was able to move down the field and set up a Manget 20 yard field goal with 6 seconds left in regulation and putting this one into overtime.

The overtime period worked out well for the Tigers.  Clemson was able to hold Tech to a field goal and would win with a touchdown.  Receiver JJ McKelvey was able to keep the Tigers' drive alive with a nice 3rd and 5 reception to keep Clemson moving.  Fittingly, Woodrow Dantzler's11 yard scamper won the game for the Tigers, and Clemson got out of Atlanta with a nice win over a highly ranked team.

Overall, Dantzler played awesome, rushing 25 times for 164 yards and completing 18 of 32 pass attempts for 254 yards.  Dantzler also ran for two scores and threw for another pair.  The McKelvey pitch and catch was unbelievable, as it came late in the contest and was executed on 4th down.  This one was truly an offensive shootout, and Clemson had a little more firepower than their ACC foe.

Woody Dantzler scores for the Tigers in the first overtime period:

Overall game highlights seen below, and start at 2:25.  I had a tough time rounding up only video of this game, so included highlights of the 2000-2001 seasons also: