Share All sharing options for: Requiescat in Pace, Gaines Adams 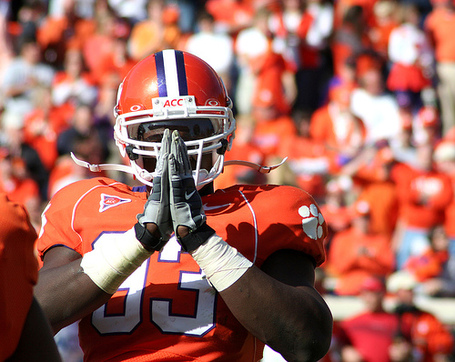 This morning we were struck by news that shakes all Tiger fans to the core: one of our own has died.

Gaines Adams signed with Clemson in 2002, coming from Fork Union Prep in Virginia. His High School, Cambridge Academy, played 8-man football and he got little interest at that time. His coach, Steve Taneyhill, tried to get people to notice him to no avail, despite winning the state championship. Taneyhill called USC, and they declined. He then called Tommy Bowden. He wasn't able to sign out of Cambridge and went to Fork Union. During his season at Fork Union, he finally got the nation's attention for his former star player.

At Fork Union, he lit up scoreboards as a TE and terrorized QBs with 22 sacks as a DE. He was committed to UNC for a short time, but John Bunting could not hold onto him and he committed to Clemson in 2002. He was a tall lanky kid who had to put on weight to play, so he redshirted in 2002. My first recollection of him is watching him fly into the Florida State backfield in 2003 as a freshman, sacking Chris Rix; his speed off the edge was so phenomenal that he ran right by some of the best left tackles in the conference even then. He broke up a pass against Tennessee in the Peach Bowl and played nearly half of that game and he gave the Vols fits off the edge.

But 2005 was his breakout season. Finally named a starter, he registered 9.5 sacks and 56 tackles. The team strung together wins and Gaines was unstoppable in each of them. He again ripped apart the Seminoles' offensive tackles. The game against Colorado in the Champs/Tangerine Bowl reminded me much of how the defense ate up Major Harris in the Gator Bowl, and Gaines Adams led the way. After the year, he called Steve Taneyhill and asked him if he should go pro. Taneyhill asked him what he wanted to do after football, to which Gaines replied, "I want to coach with you". Steve said he'd need that degree and that the pros can wait til next year, so Gaines stayed for his last year.

In 2006 he removed the stigma that had been over his head previously, namely that he "took plays off" and was stellar all year, even as the team collapsed down the stretch. One play saved the Tigers from an embarassing loss to Wake Forest. On a cool dreary day the Tigers looked lethargic and got themselves down 17-3 at the start of the 4th quarter, and Gaines picked up a fumbled FG attempt and ran it back for a TD that ignited the team to a 27-17 win and we rode a wave that continued through the night game against Georgia Tech. Gaines capped it off by being the 4th pick in the draft by the Tampa Bay Bucs.

It never mattered that Gaines didnt play for my team, I pulled for him anyway. He is a Clemson boy, Clemson is family, and we are Tigers for life.

But this morning Gaines was taken from us. We don't know why, but God has a plan and now Gaines is home. As bad as we feel for ourselves and his family, we should rejoice for him, because now he's with Our Father in a place where no shadows fall.

"I remember his smile. He never complained about how long practice was, how much hitting we were going to do. He always had that smile on his face." - Tommy Bowden

Where the Blue Ridge yawns its greatness;
Where the Tigers play;
Here the sons of dear Old Clemson,
Reign supreme always.

Dear Old Clemson, we will triumph
And with all our might
That the Tiger's roar may echo
O'er the mountain height.

Your roar will not be forgotten Gaines. You now have the ultimate triumph in His presence.