When putting together this list, there was really no doubt in my mind what the most memorable game of the decade was.  The 2003 season as a whole was out of control.  This one started off with an embarrassment to Georgia at home to the tune of 30-0.  CU looked to have it back together at several times during the season, only to get beat up by the likes of Maryland and blown out at Wake Forest.  Following the Wake debacle, Clemson hosted the #3 Florida State Seminoles.  T. Bowden, after the aforementioned epic failures, was widely viewed as a lame duck who would surely be replaced at season's end.  Florida State, on the other hand, still had legitimate national championship hopes coming into this November contest with an 8-1 record.  Somehow, someway, Clemson came out and absolutely dominated this game from the opening kickoff.  I was there, and will admit that this is the most shocked (in a positive fashion) that I have ever been with a Clemson football team.  This game was the catalyst that caused the late 2003 season run that included four straight dominating victories to close out the 2003 campaign.

That cool Saturday night was electric in the Valley, as a stadium full of fans showed up for what we all thought would be CTB's last game.  Instead, this was one that the Tigers were somehow able to dominate throughout.  FSU could not get anything going and Clemson made them pay for it.  Clemson moved the ball pretty well all night and hit a few long strikes.  The defense played extremely well and was after Chris Rix's tail the entire game. 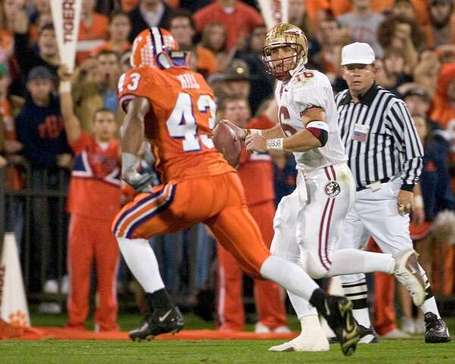 (thanks Bruce A. Kennedy)

Obviously, this one was huge for many reasons (some still reverberating to this day).  The Tigers knocked off the #3 team in the nation at home at night to begin a run that saved Bowden's job for a few years.  Was this ridiculous and exciting when it happened?  YES!  Would Clemson have been better off in the long run without the killer run ending the season?  That one we will never know.

The night started with T.L. Hanna HS celebrity Radio running down the hill:

The Tigers followed.  Here is some footage of them running down the hill and some stills from the evening:

Clemson's D started off with a bang, forcing a three and out from the Seminoles, then marching down to the 6 where Aaron Hunt was able to deliver an opening-game field goal to get Clemson on the board and roaring early.  Clemson again was able to make it happen defensively, as Tye Hill picked off a Chris Rix pass stalling the 'Noles and giving Clemson the ball on their own 28 yard line.  Hunt again capped a Clemson 53 yard drive with a 35 yard field goal to give the Tigers an early 2nd quarter 6-0 lead. 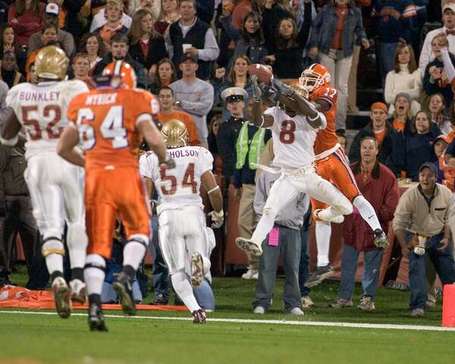 After trading punts a few times again, with penalties keeping Clemson out of FG range on one drive, Clemson was again driving but was thwarted by a Charlie Whitehurst interception near the FSU 1yd line. The highlight of the drive being a late cheap shot by Darnell Dockett on Kevin Youngblood, and him being ejected. Clemson was able to force a quick three and out and took advantage of the excellent field position by punching this drive into the endzone on a Whitehurst scramble and dive as the half drew to a close.  The highlight of the TD drive was the bomb hauled in down the Clemson side line by Kevin Youngblood.  This 51 yard grab put Clemson in prime position and was really a key blow to FSU's game.  Much to everyone's surprise, Clemson went into the locker room up 13-0 and dominating the first half of the game on both sides of the ball. Clemson's LB corps of John Leake, Leroy Hill, and Anthony Waters completely shut down the FSU running game. When ESPN reporters asked Bowden about Dockett's loss, he seemed to have no clue that he had been ejected from the game.

FSU was able to stop the Tigers to open the half but could not capitalize as a Xavier Beitia 40 yard field goal missed the mark.  Some swift running by my main man Duane Coleman coupled with a Florida State penalty helped the Tigers extend their lead over the visiting 'Noles after a 32 yard Aaron Hunt boot. A wide open Kevin Youngblood had a roughly 30yd TD pass skirt just off his fingertips immediately prior to the kick. Up until this point of the game (5min in the 3rd) Clemson had run over 50 plays for 300+ yards, while FSU had only 30 for less than 150 yards, and Clemson fans were doing the Chop.  Chris Rix was able to lead FSU down the field and cut the Clemson lead back to 13 on a Beitia 46yd field goal. After each FSU conversion or big gain, a Tiger defender would make a critical TFL or sack, and Chris Rix was hit on nearly every play of this game.  Clemson though would not be denied as Charlie Whitehurst was able to hook up with Derrick Hamilton for a 58 yard touchdown and the signature play of the game.  I still am not sure why the officials threw the unsportsmanlike flag on Hamilton in that situation.  The young man just finished off a back breaker against a top-5 team at home and really didn't show out too bad, there were no white jerseys around there at the foot of The Hill. A Leroy Hill interception on a zone blitz left the Seminoles down (and out) 23-3 at the end of the 3rd quarter.

The final period was pretty bland, with Clemson content to pound it out on the ground while the Death Valley crowd taunted FSU fans with the Chop, particularly with their Band only knowing 2 songs and incessantly playing it. FSU started the quarter and was able to move the ball better against a softer zone coverage, but another blitz and hit by David Dunham forced Rix to cough up the ball and it was recovered by DeJuan Polk. Aaron Hunt was then able to connect on a 38 yard field goal midway through the 4th.  FSU brought in Fabian Walker for mop up duty and was able to finally score a TD with the game well out of reach.  Final score:  Clemson 26 FSU 10.  Obviously T. Bowden, just days removed from the famous lip-quiver, was thrilled to see the goal posts being torn down in this historic win.

Clemson dominated this one (thanks ESPN for the stats below).  The real key was the rushing stats by FSU, the time of possession and relative lack of penalties by the Tigers and turnovers by the 'Noles.  Much of FSU's passing stats were put up at the end of the game.

Here are the games from this series in ranked order below.  I know that I may have missed a game or two.  What does everyone think about the order?  Which games did you like best?  You could certainly make a case that the 2000 UNC game (aka, the Willie Simmons game) should be on this list.