We are about halfway through the bowl season, and I would like to get a few housekeeping issues out of the way.  These are pretty much random, quick thoughts from bowl games so far as well as the debacle we saw unfold at Texas Tech and spurred on by Dr. B's earlier Leach video.

First off, the Idaho/Bowling Green game was ridiculous today.  The only thing better than the game's finish was hearing the dude from the Adams Family talk up his team.  Nebraska is almost Bammer-like genius in its coaching hire:  Bo Pelini.  These guys are doing a number on Stoops and Arizona this evening, and look to be the class of the Big 12 North for the near future.

Otherwise, Clemson pulled out its first bowl in in four tries and has shown improvement (this topic as well as an evaluation of the program as a whole and its components will be examined in great detail later on).  I hate that Georgia was able to dust off a Texas A & M team that looked to have Jack Hines as its special teams coach.  The youngbucks may not hate UGa anymore, but i still do.

After what seems like a solid month of the "U" infomercial being broadcast on the Tebow-family of networks, Miami comes out and lays an egg in their loss to Wisconsin.  The overall lack of "swagga" and thug-life behavior coupled with their loss in the Champs Bowl indicates the "U" needs to bring back some alums for a dance class.  And completely off-target, Howard Schnellenberger may be the biggest badass in the history of college football.  I completely suspect that when I make it to heaven, the voice I hear will sound something like ole Schnelle.  Not only is this guy as pimp as it gets, but dude also brought Joe-Willie to the Bear. 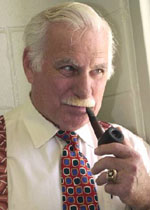 How pimp is that?

--By the way, my opinion on the "U" video is pretty simple:  this is the most mesmerizing documentary I have ever seen,  While I think ESPN over-glamerized the Miami program (and does not talk about Gene Stallings disassembling Erickson and crew), the entertainment value of these guys combined with the recklessness of this program in general is outstanding television (and for the blogsphere...this live reaction is entertaining in itself).

Yes, I understand that college football is a high-stress situation.  Yes, I know that a dead coach cannot help you win many games, but couldn't it wait until next week Urban?  While I definitely understand Meyer's issues, and think that he would be foolish not to get his life/health in order, the way this went down is crazy.

We will continue to watch the other ACC teams (try to gain some respect for the conference), the Gamechickens, and all the BCS games--particularly watching Bammer's defensive line eat Colt McCoy's lunch in the championship game.

Here is a little piece put together by Dr. B about Mike Leach.  You all probably remember the DawgSports article that pondered Danny Ford and Les Miles being crazy like a fox (seen here) and the Shakin the Southland (formerly Clempsonfootballblogspot) response (here and after Lester's poor clock-management here).  Well, I think Mike Leach is definitely fox-like crazy, and really don't know what to think of Craig James' kid.  This guy (Leach) comes off as a complete nut, but is definitely entertaining, intelligent, and the guy can flat out win football games.  T-Tech is losing the best coach in their history and will regret firing him when they return to their old 6-7-loss selves soon.  Below, see some of my favorite Leach clips (including tips on dating, a weather report, and fat girlfriend takes).

...and yes I do know this is a Clemson site, but some of this stuff is just too good not to share.

Need tips on dating?  Chuck Woolery's got nothing on Leach:

I love to think this is actually Leach sounding like Georgiafan after downing a handle of cheap burbon: