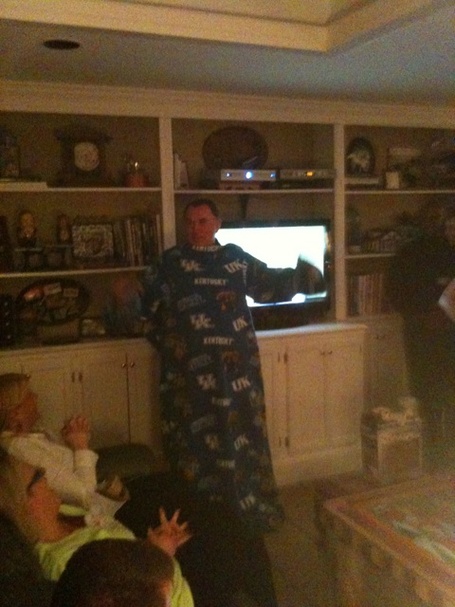 Who: Kentucky Wildcats (7-5, 3-5 SEC), with wins in 5 of their last 7 games. Schedule results are below, with a few links to the bigger games with the Kentucky and rival blogs.

Kentucky is not a bad team, while certainly not on par with Floribama, they did get big road wins at Auburn (who were 5-1, though I predicted this after Arky burst Auburns bubble) and an unexplicable win at Georgia, their first in Athens in 32 years. Their SC loss I saw most of, and Kentucky had every chance to win that game. If Hartline had not been injured, I believe they would've. When they have lost, it has been because of average play on the front line on both sides of the football. When they've won, its been because their running game was unstoppable and their defensive front played disciplined football.

Offensively, they are a heavy Wildcat-formation team. Randall Cobb is a Percy Harvin-do-everything-type; a very talented RB and receiver and Kentucky runs him to death. He has 84 carries for 537 yards and 10 TDs, and 37 receptions for 427 and 4 TDs. He's tied for 3rd in the SEC in punt return yardage. Their primary RB is Derrick Locke, with 177 carries for 843yds and 25 receptions for 254, as well as a 29.6 yd average on kickoff returns. After their regular season, they average 193 yards per game on the ground.

Freshman QB Morgan Newton, a former Clemson recruit, will start in the bowl game. He has been a servicable, though not at all stellar, backup to injured QB Mike Hartline down the stretch. He's more of an athlete than Hartline, who is a true pocket-passer.They average 142 yards per game in the air, so for the most part, he'll be throwing to Cobb or  Locke, or those two will be running the ball in Wildcat.

How has Mike Hartline's knee held up?

Brooks: "He has no swelling. He's back to where he could go in the game physically and play. At some point I'm sure he'll have an opportunity to do that."

How similar are Randall Cobb and Spiller and do you think Spiller is a once in a lifetime player?

Brooks: "Spiller is faster than Cobb, I believe. He's a running back whereas Cobb is a receiver, slash quarterback. They both return, but Spiller has had a remarkable career returning seven kickoffs for touchdowns. The guy is a threat every time he touches the ball. It's one of those deals where you hold your breath every time he touches it. It's a combination of speed and elusiveness. Sometimes when you think you have him, all of a sudden that burst of speed will separate him from the tackler. He can run through and break tackles as well."

Personnel-wise and schematically, what team resembles Clemson the most?

JOKER PHILLIPS: "Alabama without question. The similarities are there with what they did. Plus, there's some of what Tennessee did in the past, not this year, but in the past. You can tell the influence Kevin Steele and Dan Brooks have had on their defense."

The Kentucky defense, led by DC Steve Brown,  is fairly average, and hasn't shut down the run all season against major competition. They rank 11th in the SEC in rush defense. However, they do very well against the pass, ranking in the top 20 nationally. The inability to stop the run should mean that a finally healthy C.J. Spiller has a big day. Kentucky has also lost its best LB, Sam Maxwell, due to shoulder surgery.

Steve Brown: "Pretty. They've got a lot of good looking players. They have SEC talented players that are not only big and fast, but athletic. They are a good-looking team. They look like what you should look like.

What is the key then to stopping such a versatile and explosive offense?

Steve Brown: First and foremost, you've got to try to win on first down. If we can get them to make a couple of mistakes, interceptions and things of that nature, and maybe force them to rely on their running game. Our best bet is to control the ball on offense and keep those suckers off the field. It's going to take a team effort in all three phases to win this game. We've got to attack them and create turnovers and get off the field on third down.

Does Clemson's offensive style put pressure on any one area of the defense?

Steve Brown: Our corners are going to have to tackle well because they do a really good job of scheming things to where your corner is the guy making the tackle on the back. We have to defeat blocks. It's really all positions. If we do stop them from running the ball then we've still got to be really good at stopping the pass because their third-leading receiver is a running back and the second is a tight end. It's going to take all 11 men out there to stop them.

Who TF would say "pretty" about a tough, hard-nosed Danny Ford team I wonder.

Can you talk about Kentucky's defense, what impresses you?

Dabo: "They're really good inside. Their tackles create problems. I see Wake Forest and Florida State in the way they pursue the football. It's obvious they're coached extremely well. They don't get out of position very often. They play man coverage and do a super job of challenging you at the line of scrimmage. The thing most of all, they lose one of the best players we've seen on film, No. 50. No. 4 has been extremely active. No. 91 also has been good. He'll probably play on Sundays sometime in the near future. Schematically they know what they're doing. They know how to get after the quarterback. We'll have to do a great job of trying to counter their pursuit."

But the biggest intangible? Disappointment. Kentucky's season ended well but the loss to UT took the wind out of their sails a bit, and they hoped for a better bowl.  They've been to Nashville 3 out of 4 years now.

It's no secret the players were hoping for a Jan. 1 Outback Bowl. Has that been softened some and the team's interest piqued by the fact you're playing the ACC runners-up in Clemson?

Steve Brown: I would never have thought that at Kentucky we'd be worried about which bowl we're in. We're in a bowl. I asked the guys on defense, how many of you have been in bowl games. They all raised their hands. How many of you have lost a bowl game? None. We are not going down there to lose. We're not going to rest on the glory that we're going to a bowl. No ifs, ands or buts. They'll forget all about the year's accomplishments when it comes down to winning or losing the bowl game.

Clemson's administration asked for the Car Care Bowl in Charlotte, knowing that fans would make the shorter trip there instead of Orlando (Tangerine) or a cold Nashville 2 days after Christmas when they'd just been to Tampa. Its unlikely we'd have done well with tickets to the Gator (which I feel like we deserved) either. Last time we went to Nashville, we didnt want to be there, and got spanked.

I dont know if it'll turn out any different this time, but 9-5 is a shitpot better than 8-6 if you ask me.