Q & A with Kentucky's Sea of Blue

Share All sharing options for: Q & A with Kentucky's Sea of Blue 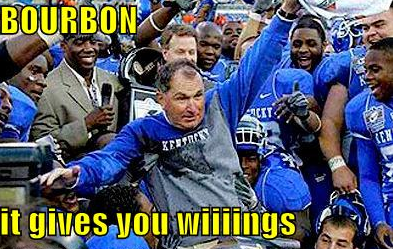 Kentucky's SBNation Blog A Sea Of Blue was kind enough to do a Q&A with us this week, we'll put this up and our game preview tonight or in the morning. Our answers to their questions will be posted later.

When you beat us a few years ago, it seemed like Rich Brooks was really turning the program around and that you could make a run at the big boys in the SEC East, but it hasn't materialized, why do you think that is? Can you grade Rich Brooks' performance as a coach (recruiting, preparation, and in-game decisions)?

Making "a run at the big boys in the SEC East" is a pipe dream most seasons.  Seriously, Florida, Tennessee and Georgia are far superior programs to Kentucky in football, and that really matters.  I'm not saying UK can never wind up at the top of the division, but it takes a very long time to grow a program from the depths that UK had sunk to, and it's even tougher in the stony desert that is the SEC.  The SEC East is a brutal place to play football.

UK is gradually becoming more and more competitive in the SEC, which is the way it has to be done.  We would have hoped to break through to a .500 season or better in conference, but that is a difficult thing to do with the competition there.  Rich Brooks has done a very good job overall, but like all coaching staffs, they have made mistakes in-game that have cost us.  Brooks & Co. continue to recruit well, and the Wildcats are poised for a breakthrough.  But that breakthrough could still be a couple of years away.

I would give Brooks an overall grade of B- for this most recent year, a B+ for recruiting, B for preparation and a C for in-game decision-making.  Part of that is the staff seeing the team do things in practice that they just cannot deliver in games, and part of it is probably an attempt to protect our small runners for getting beat up from too many carries.  This year, perhaps more than any other recently, the fans have questioned Brooks' in-game decisions, with some justification.


We both have watched UK play a few times during the last few seasons, but could you tell us about the offensive and defensive schemes you run?

We run a fairly straightforward pro-style offense.  Randall Cobb will run several sets per game from the Wildcat formation, which is essentially a read-option set.  The 'Cats will run occasional spread-type sets with either Cobb or Newton at the QB spot.  Our standard setup is two backs with two WR's and a slot receiver, but UK uses numerous other offensive sets but almost never runs an empty backfield.

The Wildcat formation features a tailback crossing-motion read option with one option being the tailback who lines up in the slot, usually Derrick Locke.  When properly executed, this formation is particularly deadly and is responsible for a disproportionate amount of UK's offensive yardage on a per-snap basis.

Defensively, the 'Cats run a fairly conventional 4-3 for most downs, with a nickel package for passing downs and relatively few blitz schemes.  Kentucky is pretty talented in the defensive backfield and will be man-to-man 90% of the time.

Are you anxious for Joker Phillips to take over the program when Brooks retires? How has he evolved as offensive coordinator since the last time these teams played?

I am fine with Brooks staying as long as he will.  I am interested to see how Phillips will do as head coach, but I am willing to wait for Brooks to make the call.  Unlike some other coaches, he is unlikely to try to coach until death.

I think, but do not know, that Phillips would prefer to run more non-conventional offense than Brooks does.  Brooks is very dead set against many of the latest innovations such as the spread option attack.  Brooks understands that some of that is necessary to maximize the ability of our talent, but I don't think he wants to run any more of it than absolutely necessary.

The evolution of Phillips is hard to gage, because André Woodson was a straight, drop-back passer ideal for Brooks' offense.  Mike Hartline is also, but he has a relatively weak arm and that makes downfield throws for him more difficult.  Newton is a dual-threat quarterback that does not fit neatly into any offensive scheme that UK runs, and Brooks would prefer that he develop into a pro-style passing quarterback.  It remains to be seen if he is able to do that, but I think he can.

The problem is, UK has not had a good fit for the pro-style offense for the last two seasons, and Randall Cobb has been called on to add extra punch to the offense.  But he is too short to be a full-time QB, and far too good with his legs to be forced into pro-style sets.  He is a great fit for the spread option, but UK doesn't run that.  So what we see now is Phillips trying to get the most out of what we have, and what we have right now does not fit our preferred offensive scheme.

I (Figurefour) was at the USC-UK game and Alshon Jeffery really killed UK.  Is this a function of poor CB play or just a breakout game for the freshman?  Has this been a recurring problem for UK all year?

Jeffrey hurt us because our starting cornerback, Trevard Lindley, was out.  Jeffrey is an outstanding talent, but a high ankle sprain the game before forced us to play a freshman at one corner and a sophomore at the other, and Jeffrey just ate them up.

Lindley's absence has really hurt our pass defense all year, and even the games he has played he hasn't been 100%.  Lindley will be back for the MCB, as close to 100% as he has been all year.  We should be much better in the defensive backfield than we were against the Gamecocks.

Kentucky is coming off of a disappointing loss to UT and really hoped to be in a bowl other than Music City.  Do you expect this team to play flat because of this?

I hope not, and I don't think so.  Kentucky had higher aspirations, but everybody including the team knew that this spot was a real possibility when we dropped that tough game to the Gamecocks and the one to Tennessee.  So yes, we are disappointed, but unlike Clemson, we didn't get the screws put to us outright like the Gator Bowl did to Clemson.  So in sum, the 'Cats will be ready, willing, able and excited.

Hartline and Morgan Newton have split time all year, with Newton seeing the majority of playing time since the Auburn game.  Can you compare and contrast these guys and is there a scenario that might put Hartline into the game against CU?

Hartline is a pure pro-style quarterback with average arm strength and a really good understanding of Kentucky's offensive sets.  As a fourth-year junior, he knows the offense inside and out and is able to effectively read the defense and audible to the play.  Kentucky has a very complex offense that takes years to learn, and Hartline has almost mastered it.

Morgan Newton is far more physically talented than Hartline, has a much stronger arm, and has a very limited grasp of the UK offense.  As a true freshman pressed into duty because of Hartiline's injury, he does the best he can with a limited package of offensive sets and leans on the coaches a lot more than Hartline needs to.  But Newton can throw the ball deep fairly easily where Hartline struggles to do so.  Netwon is capable of running the football and is a big, strong player who is a load to bring down if he turns it upfield.  He has tight-end size and can really throw the ball when given time.

Hartline is recovered enough to play, and we may see him if Newton is ineffective.  But I am hopeful that this extra month of practice has really been valuable for Morgan Newton, and hope  that it will be unnecessary for Hartline to be pressed into service.