Share All sharing options for: Countdown #4: USC at Clemson--2000 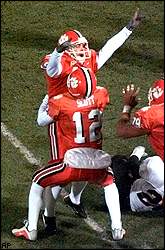 This game would have been one of the most exciting finishes in the history of this rivalry even if Clemson had not been able to drive down the field and win the game in the final seconds.  Forever known as the Catch II, the 2000 Carolina-Clemson contest featured two ranked teams (the Tigers ranked #14 and Gamecocks #25 in the USA Today poll) for only the fourth time in the history of this rivalry.  Both teams had legit shots at conference championships, but came up short earlier in the month (Clemson got drubbed by Florida State in Tallahassee, Carolina beaten handily by the Gators).  Needless to say, this was a highly anticipated game and the first in which both teams were decent since the late '80's.

Woodrow Dantzler headlined a good Clemson offense that featured Rod Gardner at wide receiver and Travis Zachary in the backfield.  Clemson's defense, under the direction of Reggie Herring, had played pretty well all season and featured some good players, particularly Keith Adams.  South Carolina utilized Derek "Squeaky" Watson at tailback and Phil Petty under center.  Both teams were dramatically improved from their 1990's woes, as a young Tom Bowden had his team ranked in the Top 5 at one point in the year and Lou Holtz improved on his initial lackluster 0-11 campaign.  Clemson's seniors, with a win, would be perfect for their Clemson careers, as the Tigers had won the previous 3 contests against the Gamecocks going into this one. 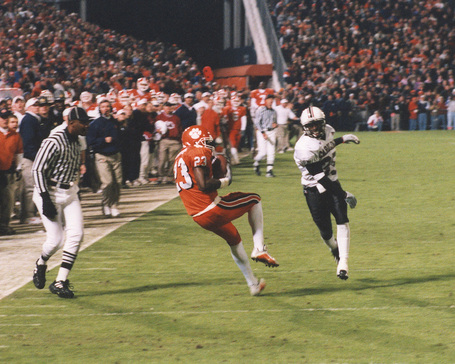 This was really a great weekend to be in Tigertown.  Thanksgiving was coming up and the Tigers had the opportunity to make it four straight victories over the in-state rival Gamecocks.  The weather going into this weekend was cold and promised to get colder (in fact, it snowed Sunday morning after the game).  Like I said earlier, the weather was crisp and seemed appropriate for this matchup between two top-25 teams.

Ultimately, my main man JD (Gardner) broke Lou Holtz and the Gamecocks off for a second straight year (see 6:10 in clip of '99 game below).  I can distinctly remember sitting there in the VIP section (we referred to the VIP section as the rail at the bottom of the grass hill just outside the Clemson locker rooms before the WEZ) hearing Cockfan crowing and somehow still having the confidence to know that Clemson would win that one.  What happened next was amazing and was truly one of the most memorable experiences I have ever had.  As the Tigers went Duane Coleman and knocked the Gamecocks out just when they thought they had this thing wrapped up.

The game started out well for the Tigers.  South Carolina received the opening kickoff and was able to drive on the Clemson defense, yet missed a makable field goal.  Clemson took the ball and drove down the football field in a drive capped off by a T-Zack touchdown.  Dantzler had a nice drive there, running well and completing some nice throws to get the Tigers down the field.  I believe that T-Zck's 1st quarter plunge for a  TD tied a Lester Brown record for Clemson touchdowns in one season.  The 1st quarter ended in a 7-7 tie, after Squeaky Watson broke a 61 yard run for a TD to tie things up.

The second period was pretty bland, with the Tigers scoring on an Aaron Hunt field goal attempt.  The highlights for the Clemson offense included two big passing plays near halftime--one to Youngblood to get the Tigers going, and a bomb from Woody Dantzler to Gardner to set up a short Hunt field goal attempt right before half.  All in all, both defenses played well in the first half and would continue this play over the course of the game.

The 2nd half started poorly for the Tigers, who were forced to punt on the opening drive.  The play that gets no run from this game was the punt after this drive.  The punt definitely touched a Carolina player and was recovered by Clemson, but somehow the Gamecocks were granted the ball.  Clemson fortunately was able to get the ball back on an Ardley interception.  Later in the period, Ardley again was able to pick off a Petty pass, although I do question the decision to lateral the ball to Robert Carswell after the int.  Clemson forced yet another interception by defensive lineman Terry Jolly on a defected ball.  The Tigers were able to tack 3 more points on the board to begin the 4th off of a 31 yard field goal by Hunt.  Tigers lead 13-7 going down the stretch.  Ultimately, South Carolina was finally able to take advantage of the great field position that they enjoyed all afternoon, scoring with less than a minute left on a Watson fumble recovered by TE Thomas Hill in the endzone to take a late 4th quarter lead of 14-13 with little time for the Tigers to respond.

Clemson took the ball and looked to be in deep trouble, especially with a 3rd and 12 scenario from its own 40 with 19 seconds on the clock.  Then it happened.  It was truly a play that seemed to take forever.  Dantzler takes the direct snap and half rolls to his left.  Protection was fine, and WD draws back and heaves the ball as far as he can.  The ball floated for what seemed like forever into an open Rod Gardener's arms.  Clemson gets the field goal team on the field and Aaron Hunt was true from 25 yards out, capping an amazing last minute for this contest.

I will admit, this is one that you are really glad to have been at, and is one of the most amazing finishes anyone could have asked for out of any game.  Thoughts on the Gardner catch are simple:  Goodman says the play was clean, and I agree.  Both guys faught all the way down the field, with Goodman grabbing and pushing Rod early in the play.  The separation was already gained and Gardner focused and pulled the ball in.  There was no question in my mind that this one was a classic, and one amazing afternoon in Death Valley.

On the note of getting robbed, South Carolina fans deviate from the obvious...USC and Watson ran the ball well early on (Watson I believe had over 100 yards in the first half) but could not get anything going later on.  I also remember South Carolina having excellent field position for most of the second half, yet the Gamecocks could produce only 7 points with so many excellent opportunities.  The real reason USC lost that game was not Dantzler or Gardner, but their inability to drive 30 yards and kick a few field goals when given such great field position.  T-Zach even helped them early by throwing an interception early on (halfback pass at the 15) with Clemson in striking position.  On top of all of this, Clemson burned the SC defense late in the 1st half with Gardner on a similar play.  Consequently, I believe the South Carolina coaching staff left the door open for the Tigers all night (and obviously did not make adjustments at the end of either half), and Rod Gardner was able to capitalize on USC's inability to close to win that one for the good guys.

Aaron Hunt
On how the win feels
"It feels great."

On being called a hero
"I am not a hero - it was a team effort."

Rod Gardner
On the last drive
"I just told the coach to throw it downfield and let me make a play."

On the closeness of the game
"It was in front of 85,000 fans and it was just unbelievable."

On the catch
"Once they scored I knew I had to make a play and once I made the catch I knew it was over. There was no way (Hunt) was going to miss the kick."

Keith Adams
"We never thought we would lose the game."

On the rivalry
"It is a great rivalry. South Carolina played hard. They played a great game. We knew we were going to have to come out and play hard. I am thrilled for our seniors because this was their last game at home. Since it is an in-state rivalry, you have got to live with the game 365 days. For our seniors to come out and win with a bang, that was great."

Robert Carswell
On the defense
"We had one breakdown but we fought hard. Our main goal of the day was to send our seniors out with a win and this makes four straight wins over South Carolina."

Chad Carson
On the win
"What a win! It has been a long time coming for us. We have lost games like this on the last play. South Carolina made some great plays and we did as well. It was a real hard-hitting game."

On the field goal
"Aaron really had the eye of the tiger. He has had a tough year, but he really stepped up today. I was really proud of him."