Clemson came into this game riding high.  The Tigers were coming off of three consecutive victories, including a win over then-#3 Florida State and a 63-17 drumming of in-state rival South Carolina.  The Tigers, who thought Tom Bowden was out the door after the horrific loss to Wake, had a new lease on life.  Tennessee, on the other hand, came into this game ranked #6 in the nation.  The Vols felt slighted about slipping down to the Peach Bowl, and many were not sure how this game would turn out for them. 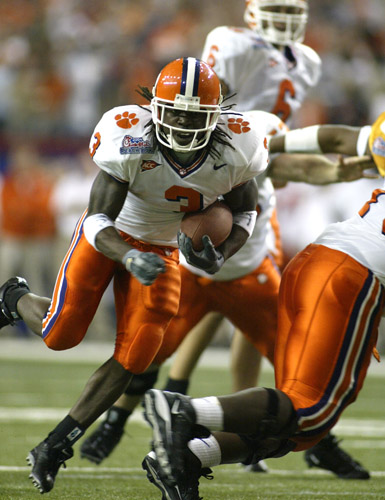 The Tigers were jacked up from pregame through post-game.  My main man Duane Coleman set the tone for this night by getting in the Vol's face early proceeding to slap the taste out of a UT player in pregame and then damage the SEC foe during the game.  Clemson received the opening kickoff and marched 80 yards.  A long (27 yard) Whitehurst to Derrick Hamilton completion, a long (35 yard) completion to Kevin Youngblood, and a 9 yard Duane Coleman scamper for a TD highlighted this possession.  It was pretty obvious that this was a statement drive and that this offense was picking up where it left off a few weeks earlier in Columbia

Eric Sampson was able to recover a fumble around midfield on UT's first drive, but the Tigers could not take advantage of the turnover, as Clemson ran three plays before being forced to punt.  Clemson's defense then forced a Vol punt, which was returned 57 yards by Derrick Hamilton and gave Clemson the ball at the Tennessee 17 yard line.  After moving the ball to the UT goal line, Clemson committed a 4th down penalty and settled for an Aaron Hunt 23 yard field goal.  Casey Clausen and the Volunteers answered with an 87 yard drive to cut the Clemson lead to 10-7 and end the scoring for the 1st quarter.

Clemson again was able to reach pay dirt to open the 2nd quarter.  This time Chad Jasmin capped a 7 play, 80 yard drive witha 15 yard TD scamper.  Tennessee followed with a punt and Charlie Whitehurst was intercepted by Gibril Wilson, giving Tennessee the ball and good field position.  The Volunteers took advantage of the Tiger miscue, scoring a touchdown to bring them within a field goal of the Tigers via a 4 play drive.  Clemson again started on their own 20, and again was able to drive 80 yards for a TD, this time capped by an 8 yard rush by Kyle Browning.

The two teams then alternated punts on three consecutive possessions, with the Tigers ending up with the ball on their own 20 and less than a minute left in the half.  After driving 65-70 yards, an Aaron Hunt field goal miss leaving the halftime score Clemson 24 UT 14.

The second half was not nearly as exciting as the first, as each defense came out and limited the other team's offense for most of the half.  The third quarter saw two punts by each team.  The real excitement in this period was UT's second offensive series of the half.  The Vols started this drive on their own 20 and moved the ball methodically down the field, relying on Casey Clausen's arm for most of the yardage.  UT eventually got down to the Clemson 3 before missing a short fieldgoal that would have made this a one possession football game.  This was really the last time all night that Tennessee was able to threaten, as the Tigers cruised through the 4th, highlighted by a miss by Aaron Hunt (20 yards) and a successful attempt by Hunt (28 yards) to close this one out for the Tigers.

Overall, this was a great win for this team.  While I will agree that Tennessee was disappointed they were not chosen for a BCS bowl and playing in the Peach as the #6 team in the country, you have to give it to the Tigers for coming out and playing extremely hard.  Somehow (i.e., the threat of getting fired) Tom Bowden was able to get this team to play excellent football down the stretch and even perform in a bowl game.  The win over Tennessee was a fun night in the Georgia Dome.  Clemson and its fans were riding high as this team could seemingly do no wrong after getting punked by Wake on Nov. 1.  Clemson finished the '03 campaign 9-4 with two wins over top-6 opponents.

Chad Jasmin had another huge game to cap off this season, rushing for 130 yards on 15 carries and scoring a TD.  Charlie Whitehust was able to manage the game well, having the lone pick and throwing some nice passes to both Hamilton and Youngblood.  Overall, the Clemson defense was able to limit the Vols to only 2 scores, despite giving up 422 total yards, 384 of those through the air.  It is noteworthy that UT was penalized 10 times for 119 yards, with many of those mistakes occurring at costly times.

All in all, shutting down Fat Phil and his crew was pleasing.  I personally don't care for Tennessee, and really enjoyed laying the pipe to them.

This game really capped a great end of the season run for the Tigers, as shown in this highlight reel that focusses on the FSU, USC, and UT games to close out an incredible run of football (note CU vs UT highlights around the 1:36 mark):

Postgame quotes from the Clemson players on this game:

"This is a terrific win for our program. Tennessee was a top 10 team, our second top 10 win in the last four games. We did something only the National Championship team did at Clemson. It has been a great season.

"You can't say enough about the job Chad Jasmin did. A senior in his last game, he ran so hard at the end of this season. He was a difference maker.

LeRoy Hill - "We are a team that likes to play defense against a I-back team. It is just easier for us because we are an aggressive attacking defense. The teams with misdirection give us the problems. I said earlier in the week that Tennessee reminds me of Florida State because of the way they play offense.

"It feels good to be on top in this game. We played hard, we practiced hard.

"Coach Lovett made some adjustments at halftime and it made a difference. They came out in some different formations that gave us problems in the first half. But, we made them one dimensional. They like to run the ball more and we took that away from them.

Chad Jasmin - "This is a great way to end my career. It really is a dream to get my first 100 yard game in my last game. But, it was a team effort all the way. What a job by our defense in the second half.

"I was confident we could run on them. Our line has really improved over the course of the season.