Share All sharing options for: Countdown: #6, Clemson at Miami  2004 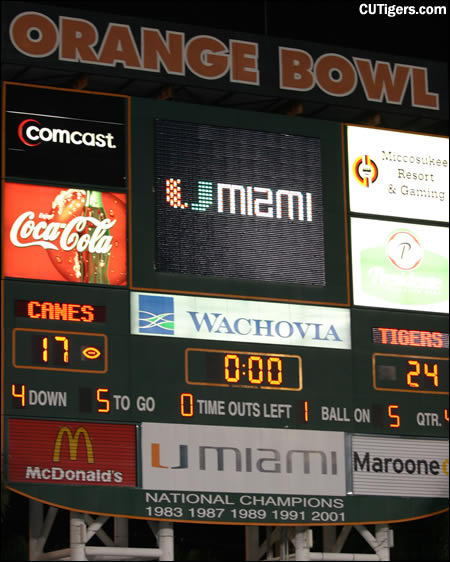 This game was one that you would not have expected from the Tigers until it was actually over.  Clemson was the underdog and facing a Miami team who hadn't lost a game in the Orange Bowl in years.  The 'Canes came into this game ranked #10 in the land and coming off of a loss at North  Carolina the previous week.  Clemson entered the contest with a 4-4 record, 3-3 in conference.  This includes a drubbing by Florida State, Virginia, and Texas A & M , and a loss to GT because we cannot a)convert a 2nd and 1 or b)snap the ball IN THE AIR to the punter.  Obviously, I was not really optimistic headed into this game, and the 1st half reaffirmed my concerns about this football team.  However, the Tigers fought back and were able to make it happen in an overtime effort.  This second half recovery was absolutely unbelievable at the time, and ending the Orange Bowl home night game win streak was a nice notch on the belt. 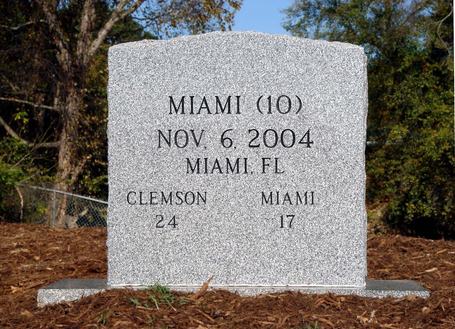 This contest did not start out well for the Tigers.  Miami received the opening kickoff and drove right down the field for a touchdown, keyed some nice carried by Frank Gore.  Clemson went 3-and-out and Miami was able to drive nearly 50 yards and successfully attempted a field goal, putting Miami up 10-0.  Clemson was able to get a field goal of its own on a Jad Dean 47 yard boot, with the score being 10-3 at the end of the first period.

Both teams' offenses struggled through the majority of the second period, with Clemson QB Charlie Whitehurst tossing an interception and each team missing a field goal.  Miami was able to put up a touchdown on another Frank Gore run to end the half with the score Miami 17 CU 3.  The first half was not a good one for the Tigers.  Clemson missed several long field goals and could not seem to click offensively.  Miami looked to be in control of this one, specifically with Brock Berlin and Frank Gore leading this team to three first half scoring drives.

The second half started out with each team punting on its first possession.  Clemson was then able to put together a steady drive, keyed largely by a Whitehurst to Airese Currie pitch and catch for 37 yards.  Reggie Merriweather capped the drive with a 27 yard TD scamper following the Curry catch to narrow the 'Cane's lead to a touchdown, which is how the third quarter ended.  The opening drive of the fourth quarter provided the only points of the period as the Tigers were able to  get down to the Miami 9 yard line and were facing a 4th and 2 deep in Hurricane territory.  The Tigers called a timeout and looked to be settling for a field goal.  The snap came and instead of kicking, holder Cole Chason flipped the ball to kicker Jad Dean, who scampered for a gain of 7 yards.  Reggie Merriweather was able to stuff it in following the fake, tying the ballgame.

Neither offense could get much going in the fourth period, with the sole scoring opportunity coming off of a 36 yard punt return by Justin Miller that gave the Tigers the ball at the Miami 33 yard line.  Clemson advanced to the 27 yard line, but Jad Dean missed a 44 yard field goal that would have given the Tigers the lead.  The game ended knotted at 17 and would require an overtime period.

Clemson took the lead on the first possession of overtime on a Merriweather touchdown run.  The Tigers benefitted from a pass interference call on a toss that was intended for Kelvin Grant, giving Clemson the ball at the Miami 2 yard line.  Clemson's defense was able to hold the Canes and deflect a fourth down pass from the 5 yard line to preserve the victory.

Charlie Whitehurst had a pretty good afternoon, completing 21 of 37 passes for 258 yards and an INT.  Reggie Merriweather ripped it up rushing for 114 yards on 20 carries.  Merriweather also scored 3 TDs on the ground.  The Clemson defense played well on the afternoon, with Tye Hill making some nice plays on the football and denying several Cane completions.  This really was a tale of two halves, with the Tigers being able to put it together in the second half and overcome earlier shortcomings and emerge victorious after the overtime period.

The scoring summary pretty much tells the tale of the game...Miami rolled Clemson up in the first half, Clemson controlled the second half and was able to win it in OT.