Share All sharing options for: Countdown: #7--Clemson at South Carolina 2003 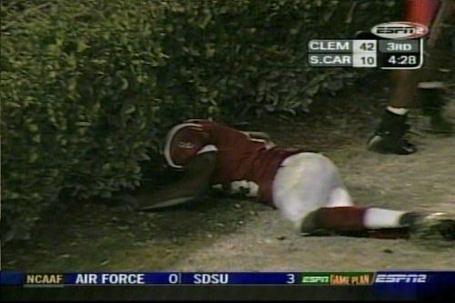 This game will forever be known as the 63-17 game.  Coming into this football game, I believe the South Carolina Gamecocks were a slight favorite.  They were playing at home to a packed house and playing against a team that had been up and down all season.  Clemson came into this football game with a lot of uncertainties.  The Tigers struggled mightily at times over the course of the season, and were really having a roller coaster-like season.  The season-opening embarrassment to Georgia did not sit well at all with the Clemson faithful.  A humiliating loss to Wake Forest on November 1 set into motion what everyone around the program thought would be the firing of Tom Bowden.  A win over then #3 Florida State was the biggest win since his arrival and took a little heat off of Bowden, and started some momentum that he should be kept on if the Tigers finished strond.

I was incorrect predicting some games during this season (the UGa thrashing was one of them).  This is one game, however, that I did correctly predict. 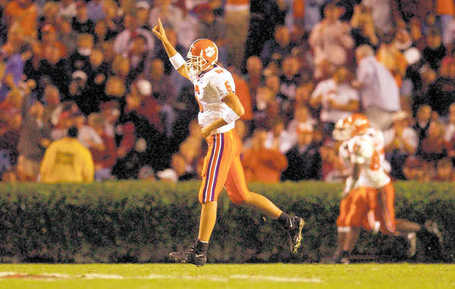 Going into this game I had a good hunch as I admittedly was in Columbia the previous week to watch the Cocks play the Gators.  This game was South Carolina's to win, and they really should have won this game.  With their defense playing well and holding UF at bay all afternoon, Lou Holtz attempted one of the dumbest moves that someone not named Les has made in the history of college football by faking a punt inside his own territory late in the 3rd quarter--with his defense playing pretty well.  After this botched effort, the Gators kicked a field goal and rallied to win the contest.  Why do I digress into this story?  I firmly believe that this fake punt deflated the Gamecocks (lost to UF) and that they would not be ready to play Clemson the next week.  This coupled with Tom Bowden showing his cockroach--like skills (he may be down, but you just can't kill him) made me firmly believe that Tom would have this team ready, as a big win would remove more heat from his chair.  If I will ever say that it is ok to wear orange britches on the road (other than the '89 game...cause Danny said it was ok) it would be for a performance like this one.

In the end, Clemson did whatever it wanted on this day.  The Gamecocks opened the game with three consecutive 3-and-out series, Clemson opened with three consecutive TD drives, all completions up the seam to Derrick Hamilton, Airese Currie, and Ben Hall.  Clemson led 21-0 at the end of the first period.  South Carolina was able to answer on its next two drives with a field goal and a TD to draw the game closer (21-10), but just as quickly Clemson responded with a pair of Chad Jasmin TDs to give the Tigers a commanding 35-10 lead at half.

USC forced a punt on Clemson's first possession of the second half, but quickly gave the Tigers the ball back when Leroy Hill intercepted a Dondrial Pinkins pass.  Chad Jasmin punched it in from there and expanded Clemson's lead to 42-10.  South Carolina passed for a TD towards the end of the third quarter, but Clemson responded with a Charlie Whitehurst toss down the sideline to my main man Duane Coleman, putting Clemson up 56-17 at the end of the 3rd period.  Both teams seemed content to run the clock in the fourth quarter, with the only real excitement being a 33 yard TD scamper by Chansi Stuckey to conclude the night's scoring. 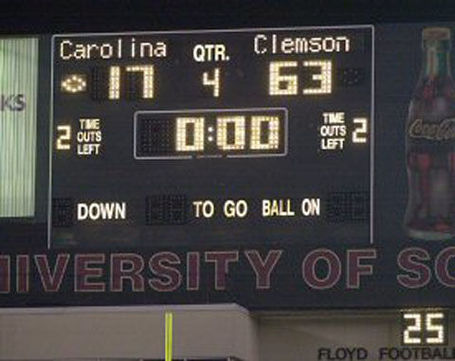 The drive chart for the Tigers is impressive, especially since Clemson pretty much burned clock the entire 4th quarter.  Pay attention to the number of plays in each drive.  Clemson benefited from good field possession on many of these possessions, and the Tigers were able to punch it in an expedited fashion.

Here is a recap of the Clemson Touchdowns: