Share All sharing options for: Countdown: #8 Clemson at Florida State 2006

Heading into this football game, Clemson had not beaten FSU in Tallahassee since Danny Ford beat up on the 'Noles down there in '89.  Florida Sate (2-0 coming into the contest) came into this game ranked 9th in the nation and featured Drew Weatherford at QB and Greg Carr at WR for the 'Noles.  Clemson came into this game 1-1 overall after dropping to Boston College earlier in the season.  The big question for the Tigers coming into this game was special teams play (Clemson gave up numerous long returns--one for a touchdown--and could not convert an extra point the previous week in an overtime loss to Boston College).  Florida State's offense had its own questions going into the game, as the 'Noles had struggled to get things going in the early part of the season. 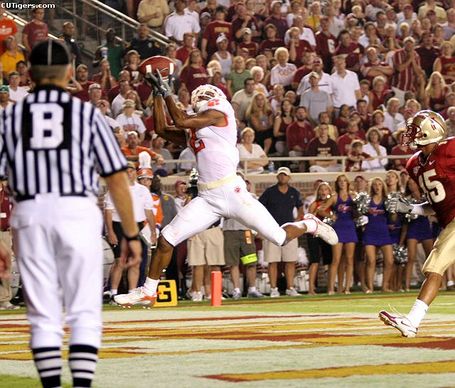 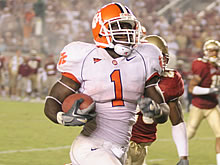 This was one of the most exciting games that I have watched over the years, and remember it distinctly.  We were out in Vegas on a guys trip and decided on the Belagio as the place to watch this one.  Clemson was coming off of a ridiculous loss the previous week to Boston College--and by ridiculous, I mean we can't kick anything to save our lives (punts, kickoffs, extra points, nothing) and really gave away that game in Chesnut Hill.  Needless to say, we all knew that we could win this game, but knew that we would have to overcome some obstacles to take down the Seminoles, particularly in the Doak.

Clemson really dominated this entire game.  The Tigers had a good game plan on both sides of the ball and were able to both put points on the board and stifle Florida State's Jeff Bowden-led offense.  Once again, however, Clemson tried to beat itself with shotty special teams play, as the Tigers gave up 9 points on field goal attempts.

Both teams were forced to punt on their opening drives, with Clemson surrendering a first down to the Seminoles  through a roughing the kicker penalty.  Florida State appeared to putting a drive together on its third possession until Clemson forced a fumble, which was recovered by my main man Duane Coleman.  This turnover set up a two-play, 46 yard drive that included a 38 yard carry by Jacoby Ford and an 8 yard scamper into the endzone by James Davis.  Unfortunately for the visitors, the extra point was blocked and returned by FSU's Tony Carter scoring 2 points for the 'Noles.  At the end of the first quarter, Clemson led 6-2. 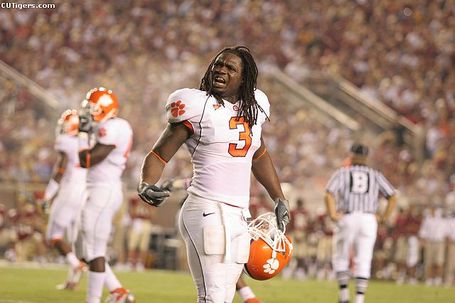 The two teams traded three consecutive punts.  Finally, as the half began to close, the Tigers put together a 60-70 yard drive, setting up a field goal with around 3:20 left in the half.  Clemson's special teams unit was again foiled, as Florida State was able to block the field goal attempt and Tony Carter again returned the block for a Seminole TD.  After the PAT, Florida State led the Tigers 9-6.  On the ensuing drive, Will Proctor was able to lead the Tigers down the field retake the lead on a 19 yard touchdown completion to Chansi Stuckey.  The 2-point conversion was good and the Tigers went to the locker room up 14-9.  Overall, Clemson should have been throttling the 'Noles at half, but were merely up a handful of points.

Clemson got the ball to start off the half and successfully extended its lead on an 80 yard drive.  The key play in this drive was 54 yard reception by James Davis.  Will Proctor was able to scamper into the endzone from 20 yards out for the score.  Because of the special teams woes earlier in the contest, the staff decided to try (and fail to convert) a 2 point attempt.  Clemson 20 FSU 9.

The Seminoles were able to piece together a 14 play, 54 yard drive that culminated in a field goal.  The two teams went into the final period with Clemson leading 20-12, but Florida State driving.  The 'Noles reached pay dirt early in the final period and successfully converted their 2-point attempt to knot things up at 20 a piece.  The two collaborated to produce four consecutive 3-and-out possessions after the FSU TD, giving Clemson the ball with 2 minutes left in the contest.  Fortunately for Tiger fans in attendance and watching all around the world, the Tigers were able to respond.  Clemson successfully moved the ball to midfield through two JD runs and an 18 yard reception by Aaron Kelly.  Clemson then changed the tempo, running a play on a quick count and completely catching the FSU defense unprepared.  The resulting 47 yard scamper gave the Tigers the ball first and goal from the 4 yard line.  Three plays later, Davis was able to punch it in from the 1, giving Clemson its first victory at the Doak in 17 years. 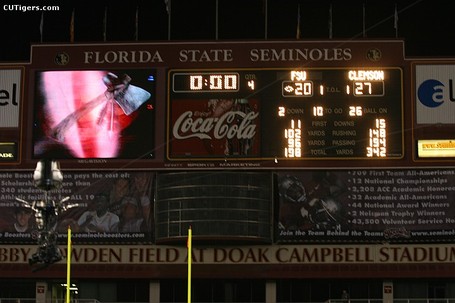 Overall, this game was memorable because of the win over the (over)rated #9 team in the land.  The win broke the Tallahassee streak and was a contest in which the Tigers won in spite of themselves (poor special teams play kept this game close for the 'Noles).  The final drive and the series of plays that were utilized in this drive really made this one game to remember (especially Davis' big run to create the 1st and goal scenario).  I was really happy to watch this team bounce back and overcome special teams shortcomings to gain an important road victory in the state of Florida.  See video below.

James Davis breaks off a monster run against an FSU defense that was not lined up nor prepared for the snap of the football.

Then Davis for the game-winning score:

and the Shoeless Highlights: