Countdown: Most Memorable Clemson Victories of the Decade #10

Share All sharing options for: Countdown: Most Memorable Clemson Victories of the Decade #10 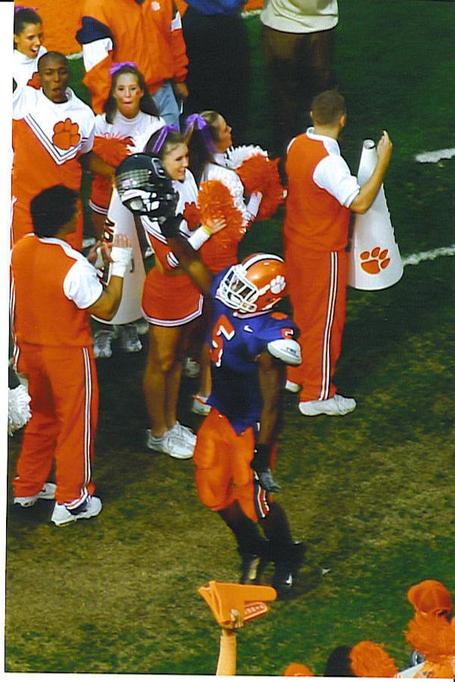 With Clemson football in a lull for another week and basketball in a pretty vanilla portion of the season, we have a chance to delve into some fun items over the holiday season.  One of the items we would like to look back on is Clemson football since the turn of the millennium.  Today we will start the first installment counting down the most memorable Clemson victories over the past ten seasons.  Please feel free to comment on the games or share anything that you wish regarding these contests.

What makes this a memorable game really has nothing to do with X's and O's nor does it involve offense or special teams.  We all remember this one as the Brawl.  First, let's discuss the game.  This one was a non-eventful contest that Clemson dominated from the opening kickoff. 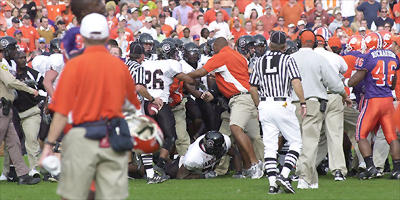 The afternoon began with the Tigers getting off of the busses and getting ready to rub the rock and run down the hill.  It was a mild and dreary day with kickoff slated for high noon.  As the team was about to begin their descent down the hill, i noticed something strange, as the South Carolina football team was standing at the bottom of the hill in preparation for the Tigers' descent.  Such disrespect stirred the pot from the get-go, and resulted in several pre-game penalties on both teams.

The game began with a Cory Boyd fumble on the opening kickoff.  Two plays later, Reggie Merriweather punched it in from 3 yards out and the Tigers held a 7-0 lead with less than one minute expiring off the game clock.  Merriweather again struck paydirt from 7 yards out, and the Tigers closed out the first quarter up 14-0.  South Carolina responded with a desperation 54 yard pitch and catch from Syvelle Newton to Cory Boyd.

The rest of the game was dominated by Merriweather and the Tigers.  Reggie had 125+ yards rushing and 3 TDs on the ground that afternoon as Clemson extended its winning streak over the in-state rival Gamecocks to 3 games.  My main man Duane "we done smoked it" Coleman contributed 13 carries for 46 yards also.  Junior Charlie Whitehurst managed the game well, amassing 151 yards through the air, with Chansi Stuckey accounting for 74 of those yards.

Offensively, the Tigers really did not have to do much.  Reggie carried this team all day with a nice performance.  There were a few nice completions from Whitehurst to Stuckey, but Clemson was pretty bland and content to pound the football in what turned out to be the last game in the pre-Spence offensive coordinator era.

The defense played well that afternoon, limiting the visitors to 131 yards passing and 66 yards on the ground.  The Gamecocks' lone score was the 54 yard prayer completed in the second quarter.  South Carolina's strength--running the football--was negated on the day as the "D" kept Syvelle Newton and his running backs (Summers and Cory "back like cooked crack" Boyd) bottled up all day. Other than the 54 yard completion in the second quarter, the Tigers showed out on the defensive side of the ball.

Overall, this one was truly dominated by Clemson.  The one thing that really struck a nerve with me on this game was the jersey color.  While I care more about the outbome of the game than the dress code, the university spent all week pimping the Solid Orange/RUOrange campaign through emails, advertisements, and pops during local talkshow.  After seeing this blitzkrieg of "wear orange" information from the administration, what do I see at the top of the hill on Saturday?  PURPLE SHIRTS!  I guess Tom didn't get the memo.

See highlights of the game below.

NOW...on to what we all remember this game for, the fighting.  The events that transpired, in my opinion, were the result of a couple of things.  First, the Gamecocks were coming off of a tough year, and an embarrassment the year before in Columbia.  These guys really had nothing to lose and were probably a little peeved about CU lighting up the scoreboard to the tune of 63 points the previous season.  Clemson sees these guys at the bottom of their hill and are immediately fired up.  The stage was set for an explosion early, and the officials did nothing to diffuse the situation.  The guys may have also been queed up for a fight after seeing the fight featuring Ron Artest the previous night in Detroit.  Overall, there was a lot of banter back and forth that ignited midway through the fourth quarter during a Clemson-dominated football game.

What does everyone else think about the actual game, the fight, uniforms, offensive strategy, etc...?  Do any of you remember the tone of the game?  My lone memory was getting taunted by cockfan leaving the game (and ignoring the drubbing) because Spurrier was coming to Columbia to "kick ass and take names." 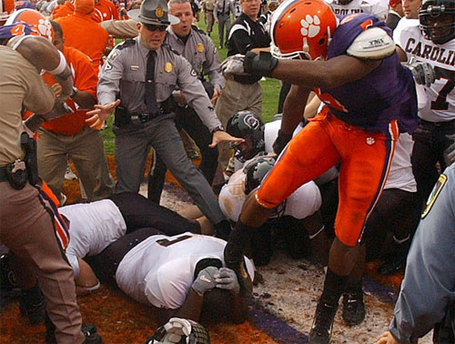 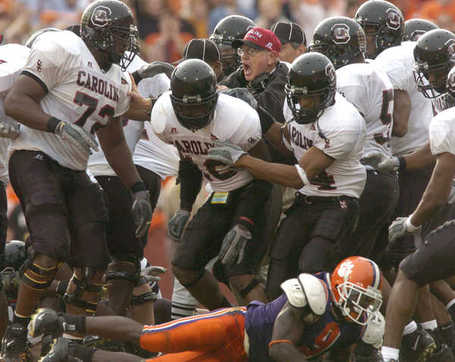