Exam Week...a Break from the Usual

Share All sharing options for: Exam Week...a Break from the Usual

With the conclusion of the football season and basketball activities suspended until the weekend's game against Furman, we get a quick break to discuss random items.  There are a lot of items that we have ignored over the course of the past 6 months because all we want to talk about is Clemson football.  For the next few months, expect to see mostly football recruiting and basketball analysis from the STS crew.  Now, I will take a few shots at other programs and other stories around the country of interest.

First, I would like to give a shout-out to Willy Korn.  WK has been committed to this program for 4-5 years.  While he did not become the superstar many thought he would be here at Clemson, we all wish him the best and appreciate his dedication to this program.  I will say that I am a little disappointed things didn't work out a little better for Korn, especially because of the injuries that hampered him his first two seasons.

The first out of state shout-out I've got to give is to is Lane Kiffin and the boys at Tennessee.  After setting the bar for out of control behavior (and having the trophy named after you), it is about time UT rises to the occasion that Fat Phil set for this group.  After a relatively law enforcement-free run early in the season, the Vols made up for lost time with some ridiculous behavior to cap the year.  Gone are the alcohol and fighting problems...in are robbery crimes.  To top this off, Lane is currently getting some run for sending the Girls Next Door all around the Southeast to escort high school kids (I assume this is more of a T-Woods escort and not the Ford model).  Further, Marcus Lattimore brought out the Vols and is pretty much giving the NCAA a knockout shot on Lane.

My take on this is simple...Lane Kiffin rolls into town and acts like Billy Badass without realizing who he is messing with.  You don't roll into the SEC like you are John Wayne without taking some collateral damage along the way.  Lane pretty much PO'ed all the coaches and admins in the conference with no cares in the world.  What he didn't take into consideration is how much football means to all these folks, specifically BAMAFAN, who want nothing more than to hammer Tennessee (and Fat Phil) for the screwjob Bammer took a decade ago.  Thus, I really don't call Marcus Lattimore's statements a narc to Tennessee simply because BAMAFAN would have outed UT anyway.  After Fulmer sold his soul cut a deal with the NCAA to turn in Alabama, the bulls-eye has been on this program, and UT has paid dearly.  For these reasons and Lane Kiffin's "there's a new sheriff in town" attitude, Tennessee deserves everything it has coming to it...

This whole dynamic also has an effect on Clemson.  Since there is little talent in the state of Tennessee, the Vols have to recruit out of state to get SEC caliber talent.  UT has traditionally (especially during Phil's cheating heyday) been successful recruiting the state of South Carolina.  Any NCAA intervention would severely limit this team to bring in the players it needs to compete in the SEC.  You can be with UT's history and the arrogance shown by its first year coach the NCAA will be looking under every rock to find something in Knoxville.

Nick Saban gets the next shout-out.  Saban is a freaking machine, and looks like the second coming of the Bear in Tuscaloosa.  Alabama does everything it takes to win, with Saban's crew being the only school to really lay the wood to Tim Tebow in the past four years.  Nick Saban is the best college football coach in years.  This guy is as tough as nails, understands the game, understands his assistants, and understands the players.  Saban wakes up pissed off (but organized) and wants one thing in life...to win football games.  We all have seen what he has done with Shula's players...imagine the Tide another year or two in. 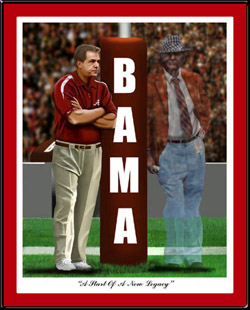 Is Notre Dame still relevant?  Has Notre Dame been relevant since it beat Florida State in '93?  Unless you are asking Lou Holtz, the answers are NO and NO.  Charlie Weis had a typical Notre Dame coaching record.  Weis, an offensive genius, could not manage the overall game and never got it all together defensively.  So, what does ND do?  First they arrogantly forfeit Weis' payoff (estimated by some at $18 million) and proclaim that the Irish job is a great position/Notre Dame will be back.  ND then conducts an 11 day search and hires Brian Kelly as its next coach.

First off, I think this is a great hire for Notre Dame.  Kelly has absolutely riped it up at the 'Nati, cruising to a 34-6 record through three seasons, leading Cinci to a perfect record and consecutive BCS bowls the past two years.  He also turned around the Central Michigan program, and in three years there won a MAC championship.  Before that, he won consecutive national championships at Grand Valley State (Div II champs in '02 and '03).  As a coach, he has done what it takes to be a winner and put Cincinnati in a position to challenge for a national championship this year.

Kelly did manage to hit a few nerves in Cinci before reporting to ND (watch player responses here).  I guess I would be a little pissed if my coach left right before the team's biggest game, but did manage to thank the players and staff for getting him the opportunity to jump ship.  Kelly is already in South Bend and will not be coaching in the bowl game.  I will be curious to see how the Golden Domers handle this situation should Kelly have some success early on (probably not a 10 year, $30-$40 mil extension).

The defensive coordinator spot has become a point of interest around the southeast.  So far, Florida looks to replace Charlie Strong, Georgia has to find a Willie Martinez replacement (cannot be too difficult to upgrade there), and FSU must fill the shoes of the legendary Mickey Andrews.  Dawgsports.com has done some pretty good research on Martinez's replacement here and here, and Tomahawk Nation has done similar research and poses articles about Kirby Smart and others.  This coaching carousel is important for Tiger fans to watch because any of these moves could begin a domino effect moving coaches all over the place.  This puts into play CU's opponents, recruiting rivals, and even some of the coaches on this staff.  This process always gets exciting immediately after the conclusion of bowl season.