Big game for Dabo, how will he get this team to play?

Share All sharing options for: Big game for Dabo, how will he get this team to play?

Over the past ten years we have seen annual bullshit from an under-prepared and non-energetic staff.  From Georgia Tech and FSU torching a piss poor Jack Hines secondary to UGa beating the shit out of an anaemic and poorly prepared team to losing to Wake and Duke in consecutive years to dropping a sure trip to the ACCCG (BC in '07), Clemson (and Tom Bowden in particular) has not been able to close the deal, come prepared, and win big games.  Basically, unless Tom was about to get fired, there is no telling what to expect out of the Tigers, week in and week out. 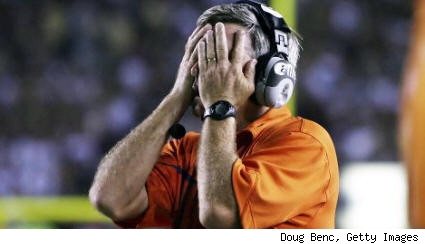 So here we are, November 2009, new coach and seemingly new attitude.  Swinney and Napier took a couple of games to get the offense going, but appear to have a decent strategy (get the ball to Spiller, Ford and the TE's).  Swinney, unlike his predecessor, does not talk about parity, half the teams winning/losing, what Bob Stoops' or Pete Carroll's team did the previous week, or bitch and moan about what he does or doesn't have to win to the media.  Still, with all the changes implemented since last season's Wake game, this team has not won a big game...a game that would catapult the Tigers to a legit football standing.  And yes, Clemson has pissed away games already this season (Maryland in particular) that should have been easy wins.

Tonight (and over the course of the next three weeks) we will get a better idea of the direction of this football program.  Clemson is favored this week, and should be favored for the balance of this season's games.  Now this program has to prove that it has improved over a decade of mediocrity and inconsistency by going out and taking care of business.  This team and this staff have to prove that they have what it takes to be a winner and will a talented team to victory instead of being just "one play away" yet another year.

As everyone is fully aware, this week's game against FSU (along with the final two ACC contests) is a big game.  Clemson has the chance to get one step closer to the ACC Championship Game and cannot come out flat and unprepared.