Share All sharing options for: GT: Defending the Midline Option

[h/t: mgoblog] Late in the game against Georgia Tech earlier this year, Paul Johnson noticed what Clemson was doing to counteract the Dive and veer option and made an adjustment to a series of QB Keepers that are part of the Midline Option package. The reason its called "midline" is because the Fullback takes the ball directly up the Center's backside, but how does that translate to the keepers that Nesbitt ran successfully against us at the end of the game?

First, I should talk about the actual midline play they ran (picture above), but thats been done very well in this link, so I will only give the simplified basics. Note: This is the same play that South Carolina beat us with, but from a spread formation, and I may do another "Defensive breakdowns" post on this later. See the end for links on the spread midline.

The Midline Option read is considered one of the easiest options to install due to the closeness of the read. On the midline option which we will call 10 or 11, you will want to run it to a 3 or 2 technique for best results and for true midline mechanics. On Midline Option you will want to teach your quarterback to read the inside jersey number of the defensive tackle.

In the front Clemson was playing, we had a Shade NT (called a 1-technique DT) playing in the A-gap (see picture below). He is lined up over the Center's outside shoulder and sometimes "Tilted" so that his body is aligned at an angle to the gap. The reason why a defense does this is to control BOTH A-gaps with one player. The guy who plays a 1-Tech is usually a big walrus (think Terrance Cody or Refridgerator Perry) who commands a double-team every time. His job is to run right into the gap, pushing the Center back, and effectively closing up both A-gaps.

The other DT is lined up on the outside shoulder of the Guard, called a 3-tech, to the other side of the 1-tech. Generally you'll see them as better pass rushers and the more talented of the two, whereas the 1-tech might be a bit quicker on the first step. He will usually have a one-on-one matchup with his Guard or face a double team with the Offensive Tackle on plays where the DE is meant to be unblocked (outside load/veer options, or zone read, for example). 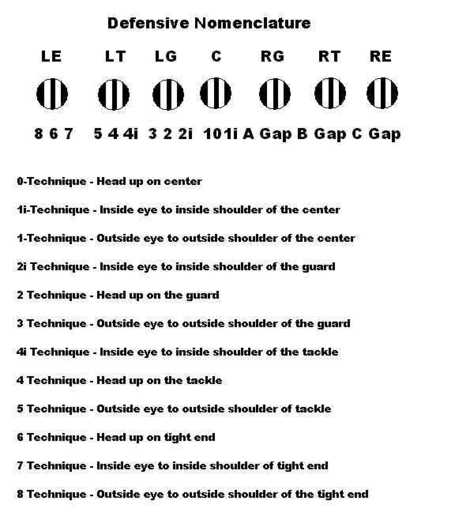 In the Georgia Tech game, both DTs collapsed towards the A-gaps to stop the FB Dive, the play that sets up the whole option offense. If you can't stop the Dive, then you wont stop the option. Also, Clemson had the SS up in the alley, giving us essentially an 8-man front to counterattack any perimeter (DE) options. The Midline series takes advantage of that situation by having the QB read that 3-tech DT, and if he pinches (moves down the line to the A-gap) then the QB keeps it himself (the pull). If he doesnt, he has the option of handing it to the FB (the give read). In effect, this is the 3rd phase of the Flexbone attack (standard spread formation can attack downfield, option: the off-tackle area, midline: the middle).

The give read happens when the quarterback sees the inside jersey number come down or he can see the white of the number (of the 3 tech).

One of the wingbacks may lead the QB into the hole vacated by the 3-tech, making this effectively a QB Iso play. See the play at the top.

The next step is the pitch, which in the Flexbone is one of the Wingbacks. Generally this is not done, the play is usually designated as a double option (either FB or QB keep) because he could be pitching it in a crowd of defenders as the pitch occurs downfield. Most OCs are scared to do that. The Sam/Will is the next read for the Midline pitch. If he takes the QB, the Wingback could be left with only a safety to beat. The link above as well as this post from The Birddog explains the Midline well.

How do you defend it? Well the first adjustment is to take away his read. If you play both DTs as a 2 or 2-i technique, he has no side to pick and will usually check to another play. Remember he's looking for the one that is offset in a 3 vs 1, if both are lined up on the Guards, he doesnt have a preferred side to run the option to. Also, being in a 3-tech, he's on the outside shoulder of the Guard, and the Guard in this play is NOT blocking him, he goes up to the LB. By being on his outside shoulder, its easier to release because he just walks around him. Having both in a 2/2i technique puts him on the Guard's nose, so he has to engage the DT. Shifting both to 2-techs makes the normal veer option easier to run though. However, as explained in the links, the Midline can be called to run off either down interior lineman.

However, in Paul Johnson's Georgia Southern playbook, he says explicitly to check to another play in the event that the defense aligns with two tackles at 2i.

What really stops teams from running a Midline, in general, is not shifting the DTs to 2-techs. The offense adjusts to widen their splits so that the 2s are far enough away to read for a midline play. What scares them away from it is the guy playing the Nose. If you have a NT who cannot get sealed by the C, and then a 3 technique on either side, its really difficult. It doesn't allow the OG's to just go upfield on the MLB. They must take a flat path to the LB which allows the MLB to scrape over the top and take the QB when the 3 tech "squeezes" to take the dive FB, who is pushed closer to the 3 tech due to the NT's play. Basically, this is what Clemson was doing alignmentwise against GT the first time, but the LBs were getting blocked because the 3-tech didnt attack the Guard...just jumped on Dwyer. So, you have to tell your guy aligned at the 3, Jamie Cumbie or Jarvis Jenkins, to manhandle his Guard and not let him release to hit the LB. The Mike should come downhill hard and see his gap closed by the 3 tech. and then scrapes outside to take the inside half of the QB. The only zone blitzes that work against veer and midline heavy teams are Bark and Whip stunts; both involve DL crashing inside and Sam or Will coming off of the corner.

This is something Clemson did well to adjust to stop Nesbitt late in the game, just too late to win it. It should have worked against South Carolina as well.

Another tactic is to run an "echo" stunt, switching the responsibilities of the MLB and the 3-DT. In this stunt,
put the Mike on dive and 3 on QB.

Additionally, assuming GT stays in their normal flexbone formation (called "Spread" in their terminology), you can't do much in terms of exotic alignments because its such a balanced formation. Generally a defensive coordinator will run an OVER or STACK front, though a shifted front like the Double Eagle will work too, in my opinion. OVER with the WILL linebacker playing with a little more depth, and with the SS dropped into the box to handle the pitch to the strongside on any veer option plays. Essentially an 8-man front.

In a STACK, it should be balanced: the LBs should play off the Wingbacks to each side, aligned head-on-to-outside, but with enough depth to see into the B-gap. The secondary would line up in a Cover 2 look,  7-10 yards deep from the Wing and a yard outside, with pitch responsibility. If they crack, the corner yells crack and replaces the safety on the pitch and the safety will overlap it.

As far as coverage, you'll see most teams play Cover 4/Quarters to one side and Cover 2 to the Boundary side (quarter-quarter-half Cover 3). This is what Miami ran most of against GT.

Against different fronts, the below diagrams show how the play changes. Note that the Midline Arc is the same play, yet the Wing (W) is the pitch man and the "Arc" denotes that the other Wing (S) arc-blocks the Corner, while the Z cracks the SS. (Toad=tackle-load, and just means the Tackle will load block the End on the playside) [images via Flexbone association] 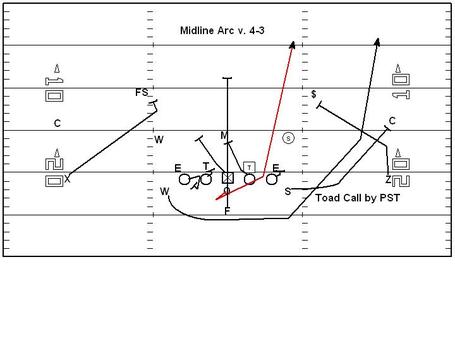 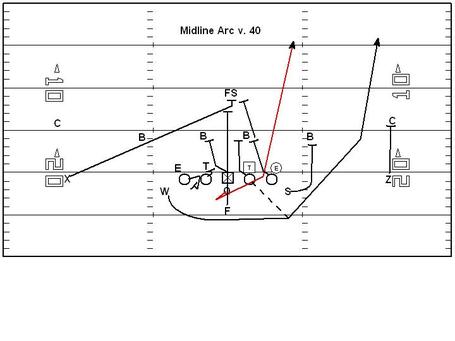 One last thing about "assignment" football that you hear so much of....its better to give an assignment instead of a matchup (e.g., tell the MIKE to take the FB every play), but even assignment football is not foolproof because Johnson or any other coordinator will change the blocking scheme. On every play, they get to choose which side of your defense gives them the most favorable matchup. This is why you dont play matchup football with a flexbone. They will run their veer to the side that gives the guard a free release and an easy block on the mike. Use your mike more as a clean up defender than an assignment player.

And just as an aside, to those who think the option is dead and buried. Courtesy of this post from the Michigan Mgoblog an example of how the Rich Rod spread run game is essentially the same play as the midline in this instance. Notice in this midline zone read, the QB reads the 3, and one side of the line zone blocks, while the other uses veer blocking, the same blocking used for the veer that Johnson uses. Its the same blocking that Spurrier used against us as well, and they added midline traps to it.

So thats the Midline, which compliments this post which dealt more with the inside veer. Both of these plays did beat us in game 1 against Georgia Tech and they do run both of them better now than they were then. If the guys inside stick to their assigned gaps, and the Linebackers stick to their assignments, a team like that runs them can be contained. But this is easier said than done.

Inside Zone read of the 3DT

Midline Trap Option from the Gun