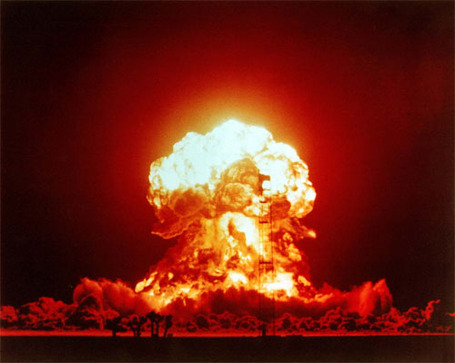 Well, maybe it is not that bad, but the tremors from the bomb SC dropped on us yesterday are still resonating throughout the Palmetto State.  I had to take a 24 hour moratorium on writing this item to allow the dust to settle and to avoid penning an article that would be too emotional and ultimately detrimental for anyone reading.  So, objectively, I will review the items that we were watching yesterday and add additional details as necessary.  The positive thing that we as Clemson fans have going for us is a trip to Tampa and a good opportunity for another game in Miami.

Did the Tigers appear distracted and overlook the Gamecocks?  It appeared as though this team was a little too confident coming into this contest.  While historical records certainly favor the Tigers (as we constantly point out and joke about here), this is 2009 and what happened in the past will not win you football games today.  While I think the coaching staff was aware that this was a big game and that South Carolina would not roll over in the same fashion they did last season, the players were not serious enough about this football game.  Hopefully this is a real eye-opener for this team and for the staff.  Nobody's crowning their asses yet, as an Atlantic Division title--while nice--doesn't mean much if Clemson cannot take care of business.  The coaching staff will need to use this game as a reminder to future teams that all games are important and any team can win on any given day.  While distraction/overconfidence may have played a role in CU's loss, it certainly was not the sole reason for the outcome of yesterday's football game.

Special teams played a role in Saturday's football game, as predicted.  Clemson and C. J. Spiller did a nice job taking advantage of an opening kickoff penalty by the Gamecocks.  Spiller was able to return his 7th kickoff for a touchdown and set a new NCAA career record in this category.  Clemson was able to convert all PAT attempts as well as its sole FG attempt on the afternoon.  CU (Da'Quan Bowers) blocked a South Carolina FG and was the benefactor of a huge mental error on the Gamecocks, as the Cocks partially blocked a punt then touched the ball, giving Clemson a gift first down on a Michael Wade--I believe--recovery and denying SC great field position.  Unfortunately, Clemson committed a big roughing the kicker penalty (Ricky Sapp, I believe, while engaged with a SC blocker, roughed up the punter), continuing a SC drive after the defense held them to a 3 and out effort.  Overall, I think we are all happy with this effort.

The running game was critical in this affair.  SC came out and did something that they have not done all year--find a running game and stick with it.  USC churned out 223 yard on the ground, with Freshman Kenny Miles leading this effort with 17 carries for 114 yards.  I really did not expect SouthCarolina to be able to come out and stick it to our defense in such a fashion.  Carolina has not done this all year and has really struggle with their run blocking.  The rushing success out of the Wildcat formation and on designed QB keepers was more expected, as such items have hurt Clemson previously this season (Virginia, Georgia Tech, and TCU all come to mind).  Clemson and offensive coordinator Billy Napier produced 48 yards on 19 carries.  Apparently Billy doesn't have the address to this blog, because we have consistently professed how to beat South Carolina's defense--RUN THE BALL BETWEEN THE TACKLES.  Clemson instead attempted reverses and everything but lining up and attacking this team right up the gut.  Clemson did not even try to commit to the inside running game, and probably ran more reverses and such than simple ISO and inside trap plays.  This was a facet of Napier's playcalling that I was really disappointed with, and cannot accept any excuses for not feeding Spiller/Ellington/Harper the rock inside more (other than Harper's fumble and the poor play of our offensive line, which we will get to later on).  Championship coaches identify opponent's weaknesses and hammer them.  Carolina has been poor in the middle of their defense for years.  Clemson's rushing strategy was simply not acceptable.  Clemson's inability to rush the ball negated the effectiveness of play action (which Clemson has successfully utilized over the last portion of this season) as the game progressed.

Turnovers, in a nutshell, killed the Tigers.  Harper's early fumble, in my opinion, was the turning point of the football game.  Up 7 and driving after forcing a Steven Garcia INT, Clemson had a chance to really get it going inside Gamecock territory.  Instead, Jamie Harper puts the ball on the ground and a complete momentum shift occurred.  South Carolina has given up several times this season (Tennessee and Arkansas immediately come to mind), and goiing up 14-0 early in the game would have been deflating for this team.  Instead, SouthCarolina comes out and drives right down the field, with Stephon Gilmore leading the charge out of the Wildcat formation.  His completion to fellow Freshman Alshon Jeffery was impressive.  This drive was very well planned, as SOS did a good job here of changing the pace while still capturing the big play we were used to seeing out the the Old Ball Coach while at Florida.  Not to digress too far, but this was set up by a key Clemson turnover.  On the flip side, Clemson benefited from one interception and the a gift from the blocked punt, neither of which turned into points for the Tigers.  Clemson had many opportunities to take the ball from Carolina, but were unable to simply fall on the football when USC put it on the ground.  Losing the turnover battle and not making the most of SC's mistakes is probably the telling tale of this football game.

Offensive line play, simply stated, was terrible for Clemson.  Clifton Geathers and Cliff Matthews each had big games against the Tigers' tackles.  Shaq Wilson and Eric Norwood were harassing Kyle Parker all afternoon with designed blitzes.  This was the most disappointing portion of this football game.  Clemson looked as inept against SC as it did earlier in the year when everyone we played whipped out OL.  This time, however, all members of the OLgot embarrassed.  Kyle Parker had no protection all afternoon and was constantly running for his life.  We have discussed here what we think the main problem with this line is (and where it all started).  I would strongly suggest reading both of these articles by Dr. B (2008 and 2009 Editions, linked immediately following this sentence), as I will not get too far into this today (I fully expect this issue to be a hot topic over the course of the next few weeks/months.  2008 Edition and 2009 Edition.  South Carolina, on the other hand, whipped us up front and ran the ball well (see above).  Because they could run the ball, they did not have to throw the ball (and pass protect) against a really good CU pass defense.

Clemson did a poor job defensively.  The defense looked winded to me late.  Clemson had some botched gap assignments and missed a few tackles.  Carolina had over 36 min of total offense, tiring the Clemson defense.  Clemson got pushed around up front and were unable to force as many three and out drives as we have seen all season long.  Once again, SC'sability to dominate up front, control the ball with their rushing game, and capitalize on drives (with touchdowns) kept the Clemson defense on the field and getting pushed around.  This is the first time all year that I can remember this D-Line getting out-muscled.

Overall, South Carolina simply wanted it more.  They came out and took it to us in the trenches.  SOS and Ellis Johnson had pretty good gameplans on both sides of the football, and the Gamecocks executed pretty well.  Carolina was the benefactor of a couple big breaks and bounces of the football (Clemson cannot recover two fumbles, SC field goal banks through the uprights, etc...).  Fortunately, as mentioned earlier in the week, this game means nothing (other than the fact that I get to hear trash talk all year from my Cockfan coworkers and others), as Clemson can redeem itself and capture an Orange Bowl invitation by defeating Georgia Tech Saturday night in Tampa.

There were a few positives Satruday.  C. J. Spiller was able to set an NCAA record with his game-opening kickoff return for a TD.  Unfortunately, Spiller was able to contribute little after that, as his run for the Heisman took a significant hit against the Gamecocks.  Michael Palmer had 8 catches for 106 yards and a touchdown.  This was the first 100 yard passing game since 1970, and only the second in school history, per the Greenville News.  Palmer and Allen have combined this season to break many of the TE records set by Pittsburgh Steelers legend Bennie Cunningham in the 1970's.  This game should be a real eye-opener and give the coaches plenty to harp on until next September.

On to Tampa.  The Tigers will do battle with The Georgia Tech Yellow Jackets for the honor of representing the ACC in this year's Orange Bowl.  You all remember Clemson's first Thursday night game against Tech earlier in the season.  Tech, like Clemson, comes into this contest following a stinging loss to its in-state rival (I feel for them, cause I absolutely hate Georgia).  Clemson cannot afford to commit the stupid mistakes it made against Tech earlier in the year, particularly on special teams.  We both think that Clemson has an excellent chance to win this weekend, especially after watching Georgia run all over GT.  The Willie Martinez-led defense was able to hold GT to 340 total yards and just over 200 on the ground.  If Willie can be effective against this potent offense, there is no reason Clemson shouldn't have a good change at slowing them down.  We will get into more game analysis and keys to this contest as the game gets closer.  Here are some of our opinions and overviews of the first contest against Tech.  These are good reads and are good homework/holdover materials until we release some new material later in the week.

Here are some notes on basic strategies and palys GT will use on Saturday: