Inside the Clemson Offense: Sprint Draw and PA Option

Share All sharing options for: Inside the Clemson Offense: Sprint Draw and PA Option

Looking over the film of the games, I noticed this play and the various play-action passes based off of it when I was thinking it was isolation. This play looks very similar to the Iso when the FB leads up the middle. One way to distinguish the two is by the quarterback's opening footwork. If he opens to the play it is a draw, if he opens opposite, it is iso. The sprint draw play is generally run to the weakside in a passing situation, because with the FB as a lead blocker, you have one extra to that side. It uses various blocking schemes at the POA to be more effective, and can be run with man or zone blocking. 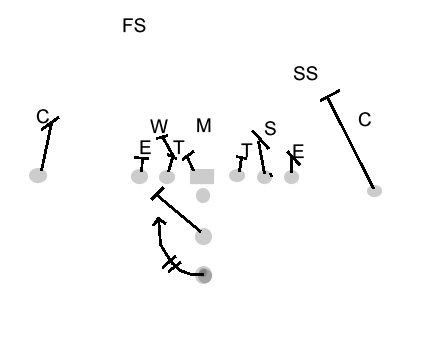 Although the play is usually run to the weakside, it is easily flipped to a 36 Draw, so i'll denote the Front Side as the play side (left above) and the back side (right above). The reaction of the defense to the draw is more important than the down & distance situation, because that will tell you how they will react to the PA passes off of it, that i'll highlight below. I've drawn it as against a 4-3 EVEN stack (forgive my MSPaint skills), but the adjustments will be apparent below against any front.

Specifics of this play:

Blocking-Recall that base just means man-to-man straight ahead. This is just one possible blocking scheme to use. Linemen are usually instructed to take larger splits for this play.

FST- Lead/base blocks End, could have help inside from the Guard (a "smash" call). If he slants (pinches inside to the center), then the tackle down blocks him. If he stays outside, the tackle may turn him out.

FSG-If covered, slides and base blocks the DT. If uncovered, he lead blocks the DE with the FST. If the Nose is shaded to his A-gap (1-tech), he will combo with the Center.

Center-If covered, takes the Nose Guard or Shade DT base. If uncovered, smash/combo blocks with the BSG on his man.

BSG-If covered, base. If uncovered, combo block with the Center on the Shade or Nose.

Alterations: Depending on the gameplanning, and the ability of your Line vs. theirs, you may not have to double-team the nose or play side DE.

For example, if the FSG isnt needed to double-team the slanting End, he can step around him to the nearest LB he sees. He may also be told to take a step playside and run upfield to take out the WILL backer. Likewise for the BSG.The Center can be adjusted, if uncovered, to step upfield and take out MIKE (this is a common alteration). Otherwise you hope the TB can get out and around the DE/WLB before MIKE can scrape over to make a play, assuming he doesnt charge right into the A-gap when he reads run. The BST can be told to release inside, if uncovered, and take out the nearest LB (drawn above)

Now for the backs & receivers:

SE/X: Takes an inside release to cut off the primary support, and if the play is flipped he cracks the FS.

FL/Z: Releases downfield, attempts to crack the SS to block the middle 1/3.

TE/Y: If he's on the frontside, he base blocks. If backside, as above, he cuts off the backside DE. If uncovered, takes out closest backside support.

FB: Aligns his toes at 4.5 yards deep, and on the snap aims at the outside hip of the PST, attempting to block inside-out on the #3 man to that side (a LB) or the first man he sees that can threaten the play.  If the FSG is covered, he'll roll over to hook block that OLB. If he's uncovered, he can be told to change his direction to the inside hip of the PST and inside-out block the OLB (or the last man on the LOS).

TB: Aligns at 7.5 yards deep, and takes a read step to the inside hip of the tackle or H-back (if used, see below) depending on the gameplan. His first read is the #3 defensive man to the play side, keying his lead blocker and the PST. He may take the ball inside or outside depending on which way they go. He must press the line in a N-S direction to make the defense commit.

With an H-back and a slightly different front, the play is diagrammed below. 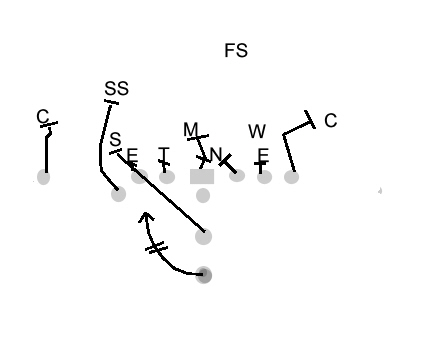 Note that in both cases, the QB opens for the handoff like a pass, and continues rolling out to the playside to keep the secondary honest.

Once the sprint draw is established and the defense has to stay home to respect it, the play-action is set up. Here is a 4 Pass X Option play using choice/adjustable routes, ala Spurrier and Bobby Petrino. Some teams may call a certain version because of the defense that is shown (cover 2 zone or man, for example) but in certain schemes the play is adjusted on the fly based on the coverage seen at the snap. PA passes like this can be run on any down and not necessarily in passing situations. The SE's option is very effective on the boundary side. 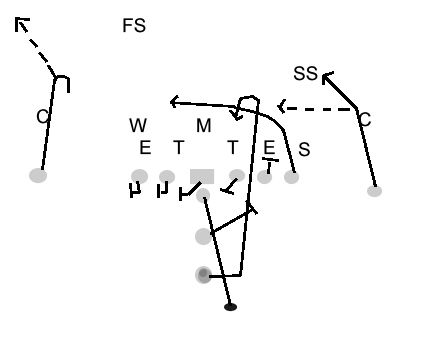 While the RT is told to block the #2 man to his side, the rest of the blocking is backside gap for the linemen. The FB blocks the playside SAM if he comes in on the PA or a blitz, or any threat he sees outside. A common adjustment is to run him on an arrow route to the sideline on a delayed release if there is no blitzer.

X- If the CB plays off, he runs a 16 yard curl route (dark line above) on an inside release. If the defense shows bump & run (man) or Cover 2 Zone, he runs a corner route to pull that FS over. Note that he is on the backside and is the last read.

Z- runs a square-in/Dig from an inside release about 17-18 yards deep, or a post route (if cover 2) depending on the coverage shown. He will be the first read.

Y/TE- Takes an inside release, running an 8 yard drag route towards the weakside. If this doesnt pull a LB out of zone to free up the Z, the TB should. He is the 2nd read on this play.

TB-Executes a fake, and runs a short 5 yard hook between the RG and RT. if the LB comes down to cover him, the drag should be open. If he sees a LB blitz, he must be prepared to take him.

QB-Fronts out, 7 steps back to the fake, sets up and looks to the Z first, then Y and the TB and X in that order.

I've shown the sprint draw play based on the I-formation, where it is readily apparent, but its easily run inside and from other formations as you'll see in the video below.