Share All sharing options for: Napier's fate is sealed 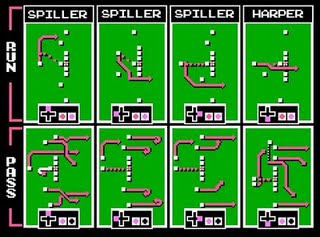 With the suggestions of Swinney overruling playcalling, my post as well as others have forced some of the beatwriters to ask Napier and Swinney about who is really calling the plays. David Hood talked with Swinney and he said this:

Swinney has come under fire for taking too much of a hand in the play-calling, and that the efforts of Swinney trying to co-coordinate with offensive coordinator Billy Napier are hurting the effort, but Swinney says he has very little input in the actual play calls.

"I am not calling plays," Swinney said. "Occasionally, I might get asked to make a suggestion, but I am more in trying to manage the game. It might be a situation where I am asked, in a certain spot, do we want to be more aggressive or more conservative, that kind of thing. But I am not calling plays."

Coach Napier, when questioned by Larry Williams, said Swinney was calling "a couple a game." The questions Napier faced at his news conference from the other writers were total softballs. Not one of them questioned it. He also said "Maryland has just gotten better" when asked about our 81 rushing yards against a porous defense, and they had committed to stopping the run like BC did.

That seals Napier's fate to me, even if I think Swinney is exerting more control over the gameplan, and that is affecting these calls. Swinney has been up front about enough things that I'll take him at his word on this for the time being. If the offense does not improve, we will be calling for some changes on this staff come December.

Also, with the suggestion that we arent doing enough to improve our WR corps by giving them chances to catch the ball in space, and attacking the seams over the middle with the TE:

One reason for the lack of points on offense is the lack of production from a young wide receiving corps, and it has been suggested that the effort to get the ball into the hands of playmakers C.J. Spiller and Jacoby Ford, and as a result a lack of touches by the group, has halted their growth.

"Some of it is that," Swinney said. "A lot of it is just poor execution more than anything. At Maryland, we had a young wideout who had practiced great all week, and then he dropped two balls and had a holding call. That is frustrating. You have to go back to the little things, and focus on the execution. Yeah, we have a lot of young guys, and we have to do a better job of giving them more opportunities."

He also went on to say that the offense would be simplified considerably, which shouldve been done ALREADY with a young QB and WRs. I thought they did that this offseason? 25% of our possessions have netted 2 yards or less for Christ's sake. I would not give this team a single play that they don't execute in practice 20 times in a row perfectly. We should pare it down to about 30 plays altogether and tinker with formations more than anything...not until they prove they can get the job done. Its bad enough to watch without hearing yet another reference to how DABO is like DANNY.

I will only say one thing, if we lose to Wake Forest with two weeks to prepare, then Dabo will never get another comparison to Ford this year.