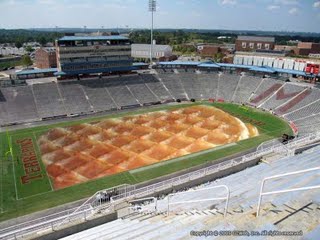 As FF mentioned below, Fridge started 31-8 at MD and has since gone 34-31. Maryland fans, of course, don't go to the games anymore to help support the team, so I suspect this will be the last time we go to Maryland with the Doughboy as HC.

Maryland is good at...nothing. They can't stop anyone on defense and turn the ball over at the 4th worst rate in the country on offense. So, basically, if we dont obliterate this team, I'm gonna go screaming in the streets and begin my killin' spree sooner than I planned.

Offense-
Fridge has always run a very pro-style offense. He picks about 10 plays and runs them from 50 formations, and it has always given Clemson fits. His OC, James Franklin, is the HC-in-waiting...until they lose about 5 more games in which case they both might get tossed. Franklin now calls the plays and the offense's flavor has changed to a more West-Coast style of play, but for the most part has been very vanilla.

West Coast offenses have emphasis on balanced football from traditional pro-sets (2 WR-1TE-2RB usually). In general, passing in the 1st half for quick scores sets up the run in the 2nd to protect an early lead, but the run game is still important. Overall it's a very detail-oriented approach to the game that emphasizes technique, execution, planning, and strategy over raw talent. Instead of "take what the defense gives you," the overriding philosophy is closer to "make the defense give you what you want by outsmarting and outplaying them." Its a difficult and verbose offense to teach unless its very distilled down and simplified, which is why it doesnt always succeed in college.

According to Bill Walsh, the quick passing of the WCO was only a suppliment to the running game and 5-7 step drop passing game. It didn't "replace" the running game nor was it the base of the offense. It was there to take advantage of bad defensive adjustments and work as a "constraint" to spread the field horizontally, like how spread teams do a variety of things (like bubble screens) to make you respect their spread out WRs.

Maryland returns leading rusher Dorell Scott (209 car, 1,113 yards, 8 TDs) for what seems like his 15th year, WR Torrey Smith can put up big numbers, along the Chia Pet at QB. The biggest problem for Turner and Scott is the OL: they are bad bad (like worse than us). They lost 3 starters off last year's team and Turner has been sacked 14 times already. Ricky Sapp and Bowers will have a field day.

The offense has turned the ball over 13 times, and Clemson should force at least a couple, but if they can run the zone read or a QB Keep and control the clock, they have a shot.

Defense-Maryland has just changed defensive philosophy this year, and it has contributed to their inability to stop anybody so far. They've allowed on average 465 yards per and only forced 2 turnovers. With Chris Cosh (former DC at SC before Nix) they were an even-front 4-3 stack that ran 80% zone coverage, now under Don Brown (former HC at UMASS, best D in 1-AA the last few years) they are a more-attacking style like Clemson's that plays more of a 4-3 Under front with 80% man/man coverage and blitzes quite often.

Alot of their problems have been due to injuries and graduation. They lost 35 seniors last year. Their best Corner fell to a broken tibia, and best Safety only returned for a few plays against Rutgers. Two LBs are playing in the NFL, and 3 DL left for the pros, and their other best CB was drafted by the Redskins.

Clemson should push this defensive front around on the rush and put up good yardage in the air.

The only thing that worries me is Fridge's proven ability to give us fits, but this game should be a blowout and should not come into question at halftime like the shit we saw last year nor be anywhere near as close as in years past.