Inside the Clemson Offense: 34/35 Zone

Share All sharing options for: Inside the Clemson Offense: 34/35 Zone

The bread and butter run play of the Spence, as well as most one-back, system is the zone rushing play. There are several to pick from but here we'll describe a brief introduction to zone blocking itself, then the specific play.

Why do teams run a zone scheme?
-Adapts to defenses that like to stunt and stem quite a bit. Essentially no defense in major college football runs a basic front without some stunting. If they didnt stunt, you could call base blocking (just take the man in front of you head-on) schemes all the time. Since they don't do that, you have to have a scheme that can adjsut to everything the defensive front shows you.
-You create combo blocks on the LOS (double-teams) and outnumber the defense at the point-of-attack, and that should open up more holes and get the back to the 2nd level.
-Combo blocking generally means you dont need as many of those 6'6 330lb linemen, and you can make do with a little less talent.

What is zone blocking?

I don't intend to do a step-by-step description of it, but it does not necessarily mean that guys block a "zone" or "area", although that is one technique that can be taught (an inside gap usually) and is in the video above. If there is a man over the Guard or Tackle head-up, then nearly every time he will just base block him. Zone schemes apply to uncovered linemen. If I am facing an ODD defense (Nose tackle over the Center) then one of the Guards will not be covered by the other DT (assuming a 4-man front, usually the LG with the RG facing a 3-Tech), and that uncovered Guard will be asked to help the Center block most of the time. If its an EVEN front (nobody over the Center), then the Center will combo block with one of the Guards.

What the combo Olineman will do is block the DL for a specified count, then release to hit a LB. Thats it. Hopefully you can push that DL back far enough so that he interfere's with the LB trying to get to the play, then the combo lineman will not have far to go to make his block.

Covered linemen take a step to the playside, then the 2nd between the defender's feet, keeping their shoulders as square as possible to the line. Uncovered linemen take a big scoop step playside, then a 2nd step trails and pushes upfield. Imagine it as them trying to ram into the defender's shoulder. Generally the entire line will look as if they are shifting to one direction.

If you want to go further into zone blocking itself, I recommend these links:
Rocky Top Talk on Inside zones, and Tomahawk Nation's post on understanding zone blocking.

My biggest complaint with the zone scheme is that it must be repped endlessly, and teaching it to young linemen can therefore be quite difficult. They have to be taught how long to hold their block at the POA and then how to get upfield. All of them must handle their assignment exactly, and the usage of their hands and their first two steps is of utmost importance.

As for the 34/35 Zone rush play itself, you might want to watch this description by Brian Billick of the Denver Broncos stretch zone blocking scheme.

I've discussed play numbering before, but again the "3" refers to the Back (QB is 1, H-back may be #2, RB is #3) and the "4" or "5" refers to the hole he's supposed to run through. 34 Zone is designed for the RB to take the ball up behind the RG and into the B-gap, but being a zone play, a cutback lane may open behind the Center (because of the combo block) and the RB has the option of taking it there.

Clemson runs the play from multiple formations, generally Ace Spread or Ace Pro Wing sets. In addressing the 34 specifically, you can run it on any down but should be most effective in short yardage situations. The fact that the QB's action is a bootleg keeps the sometimes-unblocked backside DE occupied long enough to get the Aceback through the LOS. 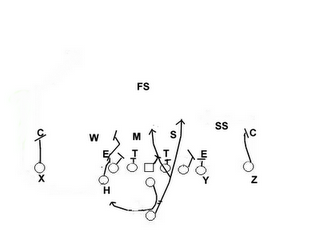 Depending on the defensive front, the Line (Center usually) makes 2 or 3 calls to control the LOS, designating who blocks whom.

Specifics:
RT: Depending on the call he will either step to the outside gap and work up to the LB, or combo block with the TE on the DE before releasing.
RG: If covered, nearly always base block. A "solid" call means he'll block to the outside gap, and a "Combo" call means he'll base block with help from the RT.
C: "Base" call=blocks the Shade/Nose Tackle. "Ram" call, if he's uncovered, would indicate he blocks to the playside gap. Other calls may indicate he could go straight to the 2nd level (e.g., "City") or to the left (Lion). He will make those calls pre-snap.
LG/LT: Either block base or "solid" meaning they'll block towards the playside gap. If the LG is covered, usually the LT will combo on the DT. The backside DE over the outside shoulder of the LT is meant to be unblocked by the LT, but this can change depending on the front they showcase (or a blitz).

H-back: Steps to the inside/playside to cut off the first man to the outside shoulder of the LT. He stays on the backside DE long enough to keep him from making the play in the backfield, then proceeds to the 2nd level to try to hit the scraping OLB.

TE/Y: Blocks base, but can adjust this based on the call between himself and the RT to help pick up any outside defender (like a blitzing OLB or SS). He aims to keep his shoulders parallel to the line, pushing towards the outside, but be aware of a pinch stunt (DE slanting inwards towards the Tackle).

X/Y: Both release upfield, then stalk block their Cornerback. The term "stalk" implies there is a technique to this block, based on the defender's alignment pre-snap. If the defender is further than 5 yards off, his aiming point is the outside jersey number. If the defender is loose, he is likely the secondary run support man, meaning his primary job is not to turn the perimeter run inside, but is the second man trying to make the play turn inside. If he's playing press/bump coverage, the WR's aiming point is the inside number, because he is probably playing primary run support. If the H-back is set out in the slot, he will also stalk block his cover man instead of the DE, but this adjustment is made in tandem with the LT.

Aceback: Runs a belly action, aiming at the outside hip of the RG, then receives the handoff. Either the hole will be there or to the inside behind the Center. He must sprint to the backside of the RG and then decide on his cut and hit the hole very hard.

QB: Opens to 5:30 position with the belly action, then runs a fake bootleg to help the H-back keep the DE occupied. If the same play is run to the opposite side, he opens to 4-4:30.

The 35 Zone is essentially the same, to the opposite side. It is shown against an ODD front in the picture with 3 wide receivers. Its very useful in setting up the countertrey, the countergap, and a bootleg/waggle pass. With the same blocking scheme you can also have the back run a Counter. 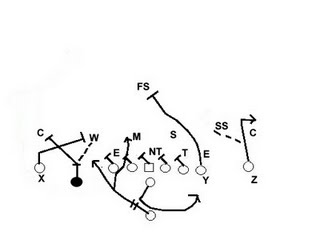 The same calls are made on the Line, but the X and Slot receivers sight adjust the OLB. If the OLB is lined up on the line opposite the slot, the slot man blocks solid on him, but if he's back showing his pass coverage the X receiver runs over on a slant route to crack him. In this case, with the OLB playing off, the slotman would run a wheel route into the CB towards the boundary. If necessary, the two receivers can make a pre-snap "Check with me" call to each other to determine who to block.

Z goes vertical to attempt to stalk the SS or man on the CB, while the TE runs a crossing route to block into the FS.

The TB has the choice of hitting the outside slice, or taking his cutback behind the LG.