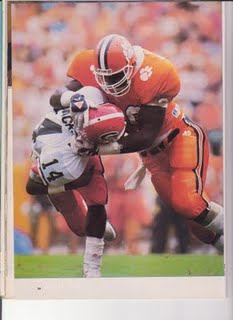 I can only take a few issues with what he says.

Another assistant had to separate them, said the anonymous writer who didn't bother to name a source or quote anyone on the record.

I'm sure Bart, or any other writer of record would NEVER give information out without quoting a source in the Athletic Department, revealing their identity and causing them to be disciplined and lose their job, then drying up the source of any new information?

No way, that would NEVER happen would it?

Its a blog, you can write whatever the fuck you want to write. I try to look at both sides of things before I post, or do some research to get things correct, but not everybody will do that. I still make mistakes sometimes, but go back and correct them when I see it. That doesnt mean you can't post heresay. If no one posted their 'inside' info, which is all heresay, then all you'd ever have to go on would be Bart's reporting prowess, ever.

What was the "stay near your computer!" stuff last year about? Heresay. Right.

All I pointed out, after writing what I have heard, was that the reporters should question the coaches on this issue. They did, so I'm satisfied.

But he is right to tell people to take what they read with a grain of salt.

On the last play where Parker was sacked.

Actually Lambert could've also made an effort to block the man who came RIGHT AT him, instead of standing there looking at the guy on Austin. The blitzer came totally free. Yes Parker held it too long, but Lambert could've blocked.

-Strelow goes into the rumor of the argument, then the troubles on offense making yardage.

-Jarvis Jenkins has quietly had a good season so far, being at some times unblockable.

-Greg Wallace talks about the OL production. There hasnt been that much improvement Greg.

-EDSBS talks about the clusterfuck that is the ACC regular season.